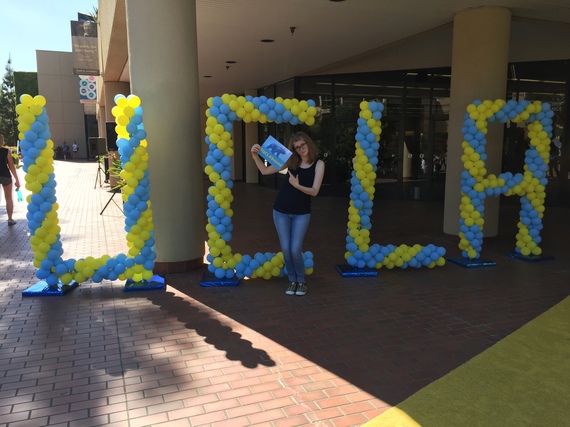 If I elbow you in the face or spill lemon juice on your paper cut or say something obnoxious that hurts your feelings, I should definitely apologize, and I'm perfectly willing to. HOWEVER: I will never apologize for the fact that I have narcolepsy and I refuse to let it beat me.

I've always been reluctant to talk about the fact that I have narcolepsy. People don't always respond particularly well to it, mostly because they don't understand what it really is or what it's like. I get why they don't understand, but that doesn't mean it's easy. Sometimes it seems like keeping narcolepsy a secret would make things simpler. But it really doesn't - it just makes things harder. It was frustrating to feel like I had to hide part of my life, avoiding certain topics of conversation and giving cop-out answers when people asked what was wrong. I felt like I couldn't count on people to treat me normally or act like I wasn't some sad, pathetic waif, so I kept it a secret from as many people as I possibly could. It took a lot of work, and I really didn't like feeling that way.

For a while, my family tried to help me feel comfortable talking about it. They didn't think I had anything to be embarrassed about. To be honest, if it weren't for some people's reactions, I wouldn't be embarrassed either.

But should I really have to qualify that? I shouldn't feel uncomfortable talking about it. Period. That's it. No qualifiers, no "I wouldn't be embarrassed, BUT ____."

I was told recently that, by telling my story, I was "fear-mongering" and being "offensive." I can only guess at the motivations behind these comments; perhaps the person who said those things didn't understand my disease and what I've been through, or maybe that person saw the horrible things narcolepsy (and the medications prescribed to fight it) does and didn't want to face the truth. I don't know. I do know this: Nobody who has had to fight for his or her life and for his or her future deserves to be told something like that. They deserve to be heard, not silenced. Narcolepsy is a real problem, and we can't afford to ignore it any longer. It's not going to go away. So I'm not going away either.

With that, here's my story (the crazy-short version): I spent several years of my life struggling with a vicious disease. I was given GHB as a prescription medication, and it nearly killed me. I was sick and exhausted all the time. I lost quite a lot -- I spent most of my senior year of high school working from home, I gave up all of my extracurricular activities, I barely graduated, and I lost friendships because I wasn't able to function well enough to see anyone.

You want to know what I'm doing now? I have a job, I'm playing Beethoven concertos on the piano, and I'm about to start school at one of the top universities in the world.

AND I WILL NEVER APOLOGIZE FOR ANY OF THAT.

You know what I realized? I don't have to care what other people think about my narcolepsy. All that matters is what I think. Because when I have the confidence to talk about it and prove every day that it can't beat me, people can tell. They can see that narcolepsy picked the wrong person to try and push around. They realize that it's a big deal and that I am a force to be reckoned with, because I am.

So to everyone who has narcolepsy and still wakes up every day: YOU ARE AMAZING. You win. And don't ever believe otherwise. Stand up for yourself. This is your life, and you can do incredible things! You just have to realize that. Don't be afraid to tell your story. And when you do talk about it, know that you are amazing just for being alive. Know that it doesn't matter what anybody else says about you, and the more you spread the cold hard truth about this disease, the easier it gets for you, and the harder it gets for other people to ignore it.

I no longer feel like I have to keep my narcolepsy a secret because somebody else might make me feel embarrassed or awkward or less valuable than I really am. It's not anyone else's job or right to determine that for me. It's mine. If I don't want to feel that way, I don't have to! It's as simple as that. So I've decided that I'm amazing, and my story is amazing too. If someone disagrees, they're allowed to do that. But I decide whether or not someone else's attitude affects my happiness. I decide what I can and can't say.

Masks Off! The Best Prime Day Deals That'll Brighten Your Teeth And Smile