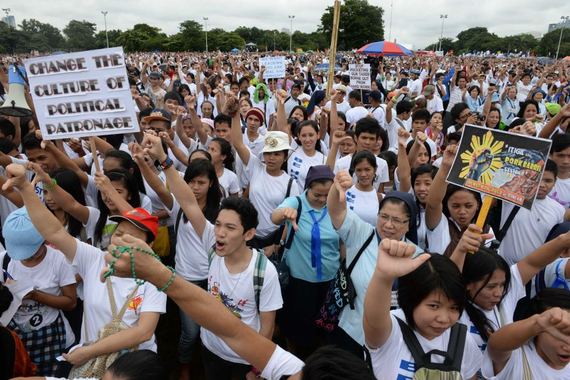 Quite a push to put together those two words in the same line, but I am feeling very hopeful and optimistic these days, a historic time in the United States because the Supreme Court just legalized same-sex marriage in the nation, something I never thought would happen in my lifetime. Indeed, the impossible could be a reality. But I also thought that instead of highlighting the negatives of a religious conservative country such as the Philippines, I would tap into the hearts of those who might be at least half way close to me in the progressive journey toward freedom and equality for all Filipino LGBTQs, and for all Filipinos.

If all people of Filipino descent were honest with ourselves, it would be safe to say that we live for contradictions. While Filipinos enjoy their hard fought independence, we also willingly submit to oppressive powers. The hypnotic hold of the Catholic Church over Filipinos is out of this world. Reason is thrown out the window as soon as "God's will or plan" is put into question, as if there's a mortal on this planet who knows what such a plan is. And so being tolerant of LGBTQs is part of God's Love Thy Neighbor plan, but the right to marry will be pushing it.

The 2013 Pew research indicated that 73% of the Philippines agree that society should accept homosexuality. Of course, "acceptance" could have easily been mistaken for "tolerance." The path from tolerance to acceptance is long and torturous, one with a high human cost. But let's assume that there is no confusion over semantics, and the Philippines is indeed on a progressive wave. May I suggest that in order to advance our progressive march we must all agree that equality--that is, in the eyes of both the Catholic God and the Law--must include ALL Filipinos?

The notion of equality is a tough one for many Filipinos. We are stuck in a feudal society full of hierarchies and medieval religious traps. Everything that happens in the Catholic Philippines is of divine nature, giving way to a culture of personal excuses so embedded in our language--hiya, baka, parang, kasi, bahala na--that stops us from thinking outside the human box and dealing with the problem head on. But let's dream for a bit. Imagine the idea of advancing the poor people of the Philippines--a Manila without slums. Imagine the idea of building together a country so that millions of our OFWs won't have to suffer in the hands of foreign oppressors. Imagine upholding the rights of women in a supposedly matriarchal society by giving them the choice when to carry life in their bodies and when not to. Imagine finally not being the only nation in the world where divorce is illegal. Imagine being accepting of LGBTQs right to exist, live with dignity, and marry and raise a family. Imagine an upwardly educated and ethical citizenry that can't be sold to corruption.

What will the Philippines look like then? (or will the Catholic God be opposed to an all-encompassing version of Love Thy Neighbor?)

Social justice is not a menu from which to pick what is most convenient to fight for at a chosen moment, and forget the rest. To have a truly progressive movement is to first and foremost identify and acknowledge our historical disease, the metaphorical cancer that Jose Rizal has so passionately written about in his books over a hundred years ago. That cancer is still very much around, and in fact has metastasized into the lives of all Filipinos. It has created a faux independence, where the colonial masters have been replaced by the wealthy politicians who live off of the oppression of the powerless. It has subjected 10% of the population to an international slave labor system where their rights are virtually non-existent.

The task at hand, progressive Filipinos, is to understand the ecosystem of social justice causes, how to fight for one means to fight for all. Convincing people to understand the complexity of social justice is a hard task, but successful revolutions are a product of personal commitment. Movements begin at a slow pace and brief conversations. Movements begin with questions. Take a look at politicians who live in luxury, and question at whose expense. Take a look at the current political and religious leaders and question to what end they lead. Take a good look at all the marginalized people of the country, and ask why they remain so and who are keeping them there?

At the very heart of progress is where each citizen takes ownership of his ideas, her body, his present and future, her life. As long as the wealthy owns the poor, or men control women's bodies, or straight people direct the lives of LGBTQs, as long as rights are suppressed, and the powerless hopes for divine intervention, the Philippines will spiral deeper into a dismal state where democracy is the privilege and the birth right of the powerful few.