The clock is ticking.

I'm writing today on behalf of my 6-year-old son. He has two moms. He is blissfully unaware of the luxury of time you've taken to make a final ruling on same-sex marriage that will serve as the Loving v. Virginia of our day. He doesn't know that his "mommy" isn't legally his mommy although she stayed home with him when he was born prematurely at less than three pounds. He doesn't know that his parents are somehow less than in the eyes of many including, apparently, some of you.

Although I think he's a genius, he is quick at math but a little slow at reading. That turns out to be in your favor. But he's learning fast. Tonight he read an entire chapter book to me for the first time. Your time is running out.

When he can read a little better, he will recognize the mixed messages in even just one day's worth of news. Nevada, Idaho and Hawaii were up this week. Last week more states.

Ours was earlier this year. Once he was asleep, we celebrated with other Virginians and Carolinians, but then you stayed the decision. He was starting school; he didn't notice our disappointment.

Also this week, women who have been together longer than my son's aging grandparents were legally married in Iowa. He didn't see the pictures. He prefers the picture of us in front of the Statue of Liberty to the ones in St. Barts from our wedding this summer, likely because his teacher said he should see Lady Liberty. In the end, it seems appropriate that his favourite picture from our wedding trip was there. He read Emma Lazarus' lines, but he doesn't know how applicable her lines are to his moms. But here we are, "yearning to breathe free." 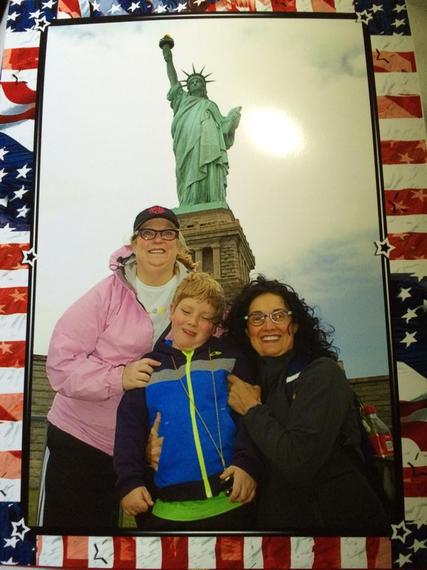 He's learning quickly. He is learning about kids from different backgrounds, and we are talking about mutual respect and difference. He will soon wonder why you haven't learned this. And then, you'll have to answer to him; indeed, you'll need to answer to an entire generation.

What will you tell him? That in 2012 you tried to be brave, but you just couldn't bring yourselves to make him safer, with two legal parents whose marriage is really real? I hope you never have to explain that to him. I hope you get a little braver soon. He's growing braver every day.

Whatever you still think about same-sex marriage, let alone same-sex parenting, you should know that the love of parent and child is just as fierce in our families as in yours. Consider yourselves warned. The time for you to save face is running out. He turns seven soon. And he's going to need some answers. The clock is ticking.