Many of us are on pins and needles as we await the Supreme Court's most significant opinion in the history of LGBT rights in the United States. In Obergefell v. Hodges, the court must decide if the United States Constitution requires states to perform same-sex marriages and, if not, whether it requires states to recognize those marriages performed elsewhere. It has a choice: It can maintain some version of the status quo, in which states remain free to deny the validity of some or all same-sex relationships, or it can ensure that same-sex couples from Lubbock to Lancing can marry and enjoy the legal recognition they deserve. To fully convey what's at stake in the U.S. Supreme Court's forthcoming opinion, and to justify my obsession with it in the midst of so many other pressing issues, I share here some personal and historical context.

Growing up in a middle-class suburb of New York, I don't remember ever meeting a single person who was openly gay. There was my favorite English teacher in junior high school who was teased mercilessly -- both because he was black and suspected of being gay. Only years later did I learn he died of something unspoken: AIDS. And there were the female gym teachers who were called "dykes" and were the target of schoolchildren's cruel jokes. At sleepaway camp, which I attended for nine years, I remember our camp "song" for people we didn't like, which was sung at least weekly: "Oh so-and-so's a faggot, a faggot, a faggot... God bless him, he knows it, god bless him, he shows it...." Imagine 250 children screaming this epithet at the top of their lungs in a cafeteria. I heard it loud and clear.

By this time, I knew I was different. Mainly, I thought I was defective and horribly cursed. Nearly half of all Americans in the mid-eighties thought homosexuality was a result of one's upbringing and environment and that gay "relations" should be illegal. I was paying attention.

In June 1986, the Supreme Court decided Bowers v. Hardwick, which upheld a Texas anti-sodomy law, allowing the police to enter couples’ homes and arrest them for being intimate. The court found no “connection between family, marriage or procreation on the one hand and homosexual activity on the other” and called the claim that “homosexuals” have a constitutional right to intimacy “at best, facetious.” In 1993, during my first year of college, President Bill Clinton signed “Don’t Ask Don’t Tell,” the disastrous compromise that alleged to end discrimination against gays and lesbians serving in the military but instead forced over 13,000 out of military service. I wasn’t surprised when, a few years later, Clinton signed the Defense of Marriage Act, defining marriage as between a man and a woman for federal purposes so that same-sex relationships couldn’t claim federal recognition. I wasn’t a lawyer then, but I was listening.

And I was gradually facing the fact that I was among that group of people whose way of loving was unaccepted. In October 1998, in the midst of the elation and fear of my own coming out, I awoke to the news that a young gay man my age, Matthew Sheppard, had been beaten, tortured, tied to a fence and left to die in Wyoming. For weeks, I could not get the image out of my head. I lived far enough away from Wyoming to tell myself I was safe. But I was watching.

Like many of my generation, I finally learned to accept and then ultimately celebrate my identity as a member of the LGBT community. In doing so, I also came to accept that I would never marry or have children.

Fast-forward 15 years: I now live in Boston with my wife and our 4-year-old daughter. My wife and I first exchanged vows in 2002 when I was in law school, before our promises had any legal meaning. In 2004, the highest court in Massachusetts became the first in the nation to declare a state constitutional right to same-sex marriage. We felt privileged to be married under Massachusetts law in 2007, quoting from the court's opinion in our ceremony. Marriage made life much easier for us. We fully integrated our finances and bought our first home together. People finally understood what we meant to one another, and we enjoyed a level of community acceptance we had never before felt. Most important, we began the process of having a child together, knowing she would be recognized in Massachusetts as both of ours (we did a second-parent adoption to safeguard legal recognition elsewhere). Yet under the Defense of Marriage Act, our marriage remained null and void to the federal government, which also happened to be my wife's employer. Our marriage also was meaningless in other states where we frequently traveled. Still, we felt thankful for what we had, knowing so many couples like us remained invisible.

In 2013, the U.S. Supreme Court decided U.S. v. Windsor and struck down the Defense of Marriage Act, providing federal recognition to valid same-sex marriages performed in so-called "marriage equality" states. That decision completed the marriage picture for those of us living in those states. Since then, my family and others in the growing number of marriage-equality states have enjoyed all the federal benefits of marriage. I finally got added to my wife's federal health care plan; our taxes are no longer a nightmare involving multiple federal returns; and we are protected in retirement. While it may seem an exaggeration to those who haven't lived it, the Windsor opinion also foundationally altered how my wife and I experience family. It sent a message that families like ours have value.

We have watched in amazement as the number of states performing same-sex marriages has exploded from roughly a dozen in 2013 to 37 in 2015. With legal recognition has come broader social acceptance: roughly 61 percent of Americans now say they support the right to same-sex marriage. And yet there are countless gay couples who, by virtue of their zip codes, have sat on the sidelines of this revolution.

The court now has an opportunity in Obergefell v. Hodges to right this historic wrong and compel all states to issue same-sex marriage licenses. If this happens, same-sex couples living in the 13 states that currently do not recognize same-sex marriages would be entitled to both state and federal recognition of their relationships and the thousands of rights associated with legal marriage. For families like mine that have enjoyed legal recognition for the past few years, it would mean we could travel freely throughout the United States without fear that a tragic accident in a non-marriage state could leave us unable to sit at our spouses' or children's hospital bedsides. Equally important, the highest court in the country would proclaim that same-sex couples across the nation are entitled to the same dignity, legal validation and celebration as all others.

My wife and I haven't explicitly discussed marriage inequality with our daughter. We haven't had to. As I was washing the dinner dishes recently, my daughter came up behind me and said, "Mama, I don't want to play the game of 'family' at school anymore." I froze, knowing immediately where this was headed.

"What is the game of family?" I asked.

"Why don't you want to play anymore?"

"Well, I'm just not used to it." I knew immediately what those words meant coming from a 4-year-old girl who is just beginning to feel her difference. She too, is listening and watching. 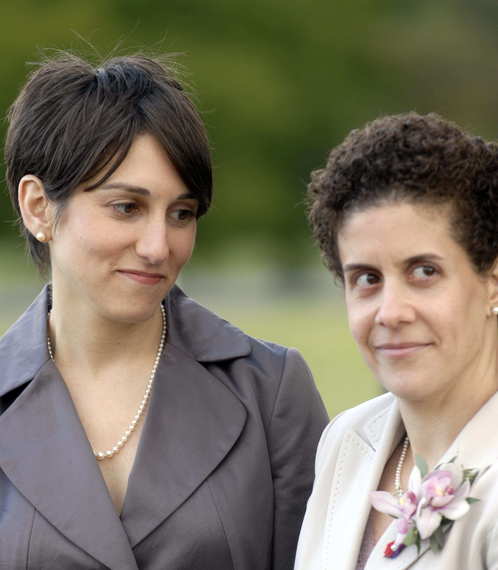