You probably didn't know much about borders at your young age. Borders are invisible dividers we adult human beings placed upon the earth -- all over the earth -- to separate ourselves from one another.

Borders surround your country of Syria.

Borders surround my country of the United States.

People that live inside these borders sometimes share the ethnicity that is indigenous to that particular region. Some do not.

We adults are hyper-focused on the ethnicity of one another in the world.

What do I mean by hyper-focused?

We compare skin color, hair color, eye color, language, religion and geographic location of others to our own. When we do these comparisons, we tend to notice the differences of these factors .

We tend to identify most with people that are mostly like us.

We tend to identify least with people that are not like us.

We tend to think that since you live so far away from us and speak a different language or live inside a different border than we live inside, we bear no responsibility for you.

If you get hurt or suffer a terrible injustice or even suffer a crime against humanity because of political arguments or disagreements happening in your country, we tend to "normalize" this.

If we were to get hurt where we live because of political disagreements and were left to die or to fend for ourselves, we would be outraged if someone didn't come to our aid. We would be angry, furious and feel almost entitled to assistance. Some of us were raised to have a sense of being better than other people in the world because of where we live or because of our skin color and hair color and religion and money and perceived status in the world.

Some leaders around the world might be similar to your ancestry in some ways, but they still might feel like they are better than you because they have more money than you do or more power. Money and power can sometimes make people feel invincible and can sometimes make their ego very large. Ego is basically what people think of themselves. Sometimes when people's egos get so strong and large, their feeling of self-importance becomes greater than it actually is. And even though they might have the wherewithal to help you when you are about to die or are fending for yourself, they don't do it because it might put their money and power at risk. These are powerful, rich people that chose their power and riches over human life.

So dear Syrian child whose body washed ashore in Turkey. You started your life off not much different than I did more than four decades ago. You learned how to walk and how to speak. You probably had some toys that you played with and you enjoyed being outside and running around just like I did when I was a kid. You probably felt the comfort of your mother's arms and felt that she was as big as the universe and could protect you from anything. You might not have thought of this consciously since you were so little! But you did feel it!

Sadly, people with power in your country decided that their ego and their money and their power was a magnificent thing. And in their warped thinking, they decided that forcing people from their homes and terrorizing them and killing them was the answer to their happiness on earth. People in power around the world that know that this is wrong and that have the power to stop them from making people flee from their homes and not kill people - did not stop them. People in power who are inside other borders in the world did not put your life as a priority over their power and their riches. They want to keep the power and riches that they have and not jeopardize that by saving your life.

So now you died.

Adults failed you. Adults killed you. And it's not your fault. You didn't do anything wrong. You are absolutely innocent. You were just a little child with no sin. 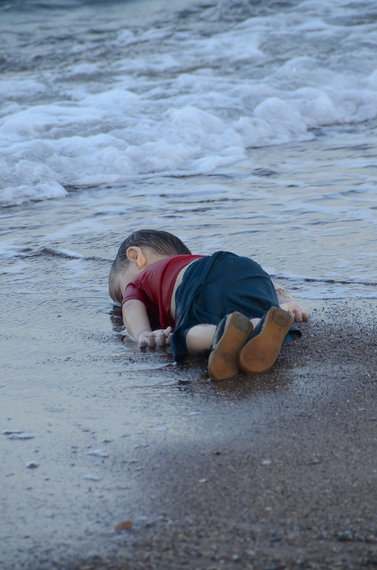 Dear Syrian child whose body washed up on the beach in Turkey: I'm so sorry that you died in the way that you did and at such a young age. You do not get the opportunity to grow up and live your life. Your life is over so that adults in the world can have things that they want to have.

From one Muslim to another, I feel comfort knowing you are safe with Allah now. Children who die are guaranteed jannah (heaven.) People who die from being oppressed are guaranteed heaven -- so I am thinking you are going to have the biggest, best playground in the highest levels of heaven! You will be laughing and running around and doing all of the things you were trying to do before people in the dunya (earthly life) let you down.

I know you are okay where you are.

But we are not okay here, sweet child.

We are very much not okay.