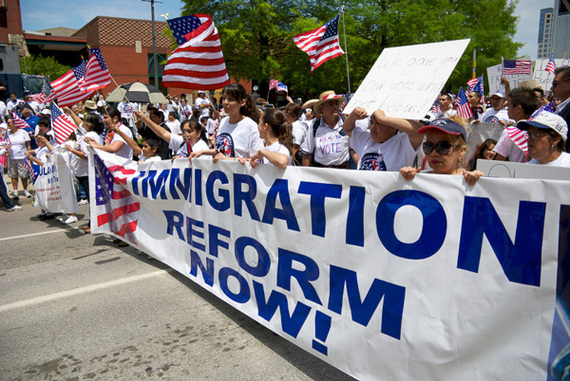 Dave Brat, the man who just defeated House Majority Leader Eric Cantor, is a Tea Party Republican and an economics professor. Brat, claiming that, "God acted through people on my behalf," apparently believes that God doesn't want immigration reform. Economists and a plethora of CBO and government research, however, disagree with Brat, the Tea Party, and perhaps even the great Republican in the cosmos. Brat was able to beat Canter in large part because he stated views like immigration reform is "the most symbolic issue that captures the difference between myself and Eric Cantor in this race." Pandering to voters who view illegal immigrants as hurting the economy, sponging off the government, and taking American jobs helped Brat make history. However, the political rhetoric and hyperbole doesn't correlate with the aggregate economic data. The Tea Party claims that illegal immigrants represent an assault on our sovereignty, but if this is true, it might be the first time in world history that a country has employed its invaders.

According to the Pew Research Hispanic Trends Project, there were 8.4 million unauthorized immigrants employed in the U.S.; representing 5.2 percent of the U.S. labor force, an increase from 3.8 percent in 2000. When examined from the point of view of certain states, the Pew Research Center lists an even higher percentage of unauthorized immigrants as part of their workforce: Nevada (10 percent), California (9.7 percent), Texas (9 percent), and New Jersey (8.6 percent). Furthermore, according to a report by Texas Comptroller Susan Combs, "without the undocumented population, Texas' work force would decrease by 6.3 percent" and Texas' gross state product would decrease by 2.1 percent.

Certain segments of the U.S. economy, like agriculture, are entirely dependent upon illegal immigrants. According to the U.S. Department of Agriculture, unauthorized immigrants have been essential to this industry for years:

Analysis conducted by Daniel Carroll, Annie Georges, and Russell Saltz using the U.S. Department of Labor's National Agricultural Workers Survey indicates that over the past 15 years, about half of the hired workers employed in U.S. crop agriculture were unauthorized, with the overwhelming majority of these workers coming from Mexico.

...any potential immigration reform could have significant impacts on the U.S. fruit and vegetable industry.

From the perspective of National Milk Producers Federation in 2009, retail milk prices would increase by 61 percent if its immigrant labor force were to be eliminated.

But what about the immense strain on social services and money spent on welfare for these law breakers? The Congressional Budget Office in 2007 answered this question in the following manner:

Over the past two decades, most efforts to estimate the fiscal impact of immigration in the United States have concluded that, in aggregate and over the long term, tax revenues of all types generated by immigrants--both legal and unauthorized--exceed the cost of the services they use.

The amount that state and local governments spend on services for unauthorized immigrants represents a small percentage of the total amount spent by those governments to provide such services to residents in their jurisdictions.

Regarding services given to these people, "unauthorized immigrants accounted for less than 5 percent of total state and local spending for those services" according to analysis by the CBO. It would be refreshing one day to hear a Tea Party candidate address these CBO findings and see the reaction of voters.

Also, blaming illegals makes no sense from a basic mathematical perspective. By some estimates there are over 100 million Americans currently on some type of government assistance. Therefore, the exaggerated claims that illegal immigrants are bankrupting the country does not only ignore basic math (100 million citizens vs. 11 million illegal immigrants). These claims also ignore research showing that illegal immigrants utilize social services at a lower rate than native born citizens. While the 1996 Welfare Reform Law prohibits illegal immigrants from almost every means tested government program (food stamps, housing assistance, Medicaid, etc.), if an illegal immigrant household has a citizen or native born family member, there are instances where they can benefit from state assistance. However, according to researchers Leighton Ku and Brian Bruen of George Washington University, "Low-income immigrants use public benefits like Medicaid or the Supplemental Nutrition Assistance Program (SNAP, formerly the Food Stamp Program) at a lower rate than low-income native-born citizens." They also state that "non-citizen immigrants receive fewer government benefits than similarly poor natives."

Furthering this view, Immigration Specialist Sejal Zota of The UNC School of Government reiterated the importance of the CBO findings:

According to a 2007 report by the Congressional Budget Office (CBO), which surveyed 29 studies in this area, most efforts to measure the fiscal impact of immigration have found that, in the aggregate and over the long term, tax revenues of all types generated by immigrants--both legal and unauthorized--exceed the cost of the services they use...

The CBO report also found spending by state and local governments on service specifically provided to unauthorized immigrants makes up a small percentage of those governments' total spending.

Eric Cantor lost the other day because Tea Party voters confuse nativist rhetoric with economic reality. Everyone from the CBO to the USDA, as well as labor economists have disproved Tea Party hyperbole with economic research. Contrary to the words of Dave Brat and every other Tea Party candidate, illegal immigrants benefit this country and an economic consensus supports this claim. While "consensus" might be a bad word in the GOP, sooner or later the nation will realize that immigration reform will help everyone. When illegal immigrants cross the border, there's a citizen waiting to hire them and benefit in some manner from their labor. When pouring milk into your cereal or eating a salad, remember that without these people, you'd be paying more for your food. For once, it would be nice to see a Tea Party Republican address the economic benefits of illegal immigration expressed by the CBO and other non-partisan sources. If they were ever forced to correlate raw economic data with their grandiose claims against immigrants, they'd realize that illegals "exceed the cost of services they use." They'd also have to accept that providing a path to citizenship for such an integral part of the workforce is common sense.