A few nights ago at a bar in Chelsea, my friends and I were approached by a friendly white guy visiting from Utah. After a few polite introductions and pleasantries, he pulled me over to tell me, "you're a really hot black guy."

He was dismissed shortly thereafter.

A month ago, I agreed to meet up with a white man who I had been chatting (see: sexting) with for a few days. After a few drinks at his place, we began to have "relations." As we're "relating," he whispered in my ear, "you like white guys, huh?" I had no idea how to respond to that. I felt like Miranda Hobbes in Sex and the City when she had to talk dirty, but couldn't. I just ignored him. He proceeded to make another declaration. "I really like black guys...especially a black guy on his knees."

Apparently his apartment was also a time machine and sent us back to the 18th century.

Online hook up sites are worse. These are a few messages I've received in the last week from white men.

Well hello to you, too Sir.

Is it different than white ass? 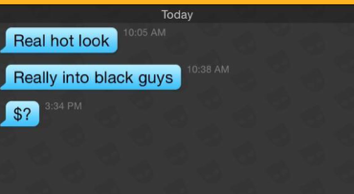 BREAKING: You can no longer buy black people!

Then I started getting annoyed.

So I change my profile. 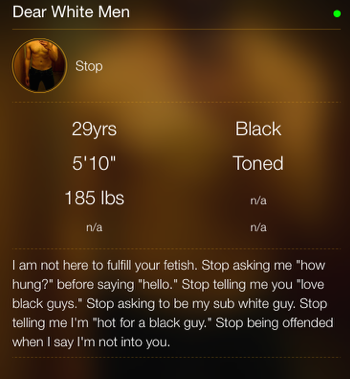 In 24 hours, I received 40 messages. I received three messages from white men apologizing for the messages I have been receiving. Completely unnecessary, but I appreciate the sentiment. One white male scolded me and told me that I "hate white men." I tried to engage him in dialogue a la Starbucks Racing Together, but like that campaign, I failed. 10 white dudes messaged with pictures of their butts completely missing the point.

And finally, 26 men of color messaged me applauding in agreement with my profile. Many of them shared their stories with me as well. One person actually told me that he felt "white gay men are no different than the rest of white society...treating us all like aggressive animals." While others commented on the fact that they receive messages online for sex by white guys, but aren't approached or ignored at a bar and felt overlooked by bartenders.

Listen, I'm not going to pretend to be a thought leader on LGBT issues or cite studies on the mental health of gay racial minorities or how prejudice can lead to depression in black gay and bisexual men (just kidding, here's a study). I'm writing on behalf of myself and all men of color out there who are growing frustrated with matters of race. What's the call to action? Be respectful.

Acceptance and appreciation of LGBT people are clearly coming faster than many of us thought possible. I'm sure there's a legitimate study on this, but I believe the growing acceptance in society is going to do wonders for the self-esteem of generations of gay men and women to come. But let's not forget we all have a responsibility for making things better within the community.

Here's just one issue to work on.