I'm writing this to you as a friend, as a dear friend. We've shared so much over the years, before kids -- blissfully ignorant childhoods, angsty teenage years, the discovery and recklessness and uncertainty of college and early adulthood, and now this. Motherhood. We've been there for each other all the time -- through birth plans gone awry, breastfeeding, being so sleep deprived we don't know if we're wearing shoes, picky eaters, husbands who appear to be working against us, discipline, the mean moms at the playground, everything. I don't know how I'd be here without you, and I hope you feel the same about me.

But now I need something. My heart hurts so much I can barely stand. I don't ask for much -- you know I hate asking for anything, but now I need help, desperately, and so I'm going to put myself out there.

Michael Brown was recently shot. I know you know who that is. You'd have to have your head under a rock, and I don't befriend women -- people -- like that. Another young black male, unarmed, shot dead by a policeman, or some white person who just thought he was in the wrong, simply because he had brown skin. The list is growing, weekly apparently, so much so that it seems like it's open season on black men and boys.

Boys like the little guy I have at home.

He is almost 6, and I know you know exactly how much I adore that child. I could stare at him all day, and a cuddle from him is an injection of human sunshine. As crazy stressed out as he can make me, he is my heart and soul living outside my flesh. There is nothing I wouldn't do for him, including take a bullet. Like you, I would do anything in my power for my little boy. Anything.

This taking a bullet thing is of course real, so very real, because in this nation, in 2014, after civil rights, even after the election of a president who looked just like my son as a boy, black men are seen as a threat. Dangerous. Guilty before proven innocent. Shoot them before they shoot you -- because those people can hocus-pocus that phone, can of Skittles, bottle of soda into a weapon faster than you can say "nigger."

Right now my son is a little boy, like yours maybe, or maybe like the one you remember. He's goofy and silly. He loves to do all those stereotypical "boy" things (please don't bring up any gender issues -- you know exactly what I'm talking about). Sometimes he likes to tussle, straddling the line between play and real. Sometimes he can't control his temper. But right now he's like a puppy to most people. He's cute and non-threatening.

What happens when he's grown up and not so cute and non-threatening? When he's walking through the world alone? No more the floppy-eared, playful youngster -- he's now the feral stray dog, worthy of extermination.

Can you imagine that? Do you see it? You do. It hurts you too much to think about, my little guy, the one who's grown up with your family, meeting this end, seen in this subhuman light by the police, by the ignorant and cowardly and the wrongly scared shitless.

But this is what Michael Brown brings up for me when I hear that another black mother is grieving for her son, the son she'll never tuck into bed again. The son she'll never see grow into a strong, independent man with a family of his own. The son whose manly arms will never grab his mother in a hug and make her feel that now, he protects her.

Remember, I'm writing you as a dear friend, because I can't believe you're not on my side. After a lifetime together I won't believe it. It's why I love you. I know you're on my side, with all those posts about how I don't have to worry about "my blond haired blue eyed son" being shot by the police. I get it, you're not boasting, just stating the sad facts, that you understand on the deepest level that your white privilege means your motherhood is different from mine.

I love you for this, but it's not enough.

But can you do more? I know you talk to your bigoted relatives.

Talk to your family about what their black and brown friends might experience that they don't have to. Teach your family to empathize with, and give the benefit of the doubt to, people whose world and experience is far outside their own.

Read about slavery and Jim Crow and the Civil Rights movement. Talk about how racism isn't history, it's now.

Tell your children about how unbalanced it is -- to put it mildly- that the news makes it seem as though only African-Americans commit crimes.

Speak up to the checker who asks for your black friend's ID to take a check and not for yours.

Speak up to the boutique owner who follows black customers around, or better yet, don't shop there.

Speak up when the brown boys at school are disproportionately disciplined and then suspended.

Write a letter to the police chief demanding the firing of officers who kill unarmed black men. Unarmed is unarmed.

And please, in your Facebook feed, share something that shows this matters to you. Don't say you don't want to be political. Don't tell me you don't want to offend people. Because all that means is you don't want to get into it with your clueless white friends. It kills me when I see posts about kittens and new shoes and not one share about boys left to die in the street. Sure, life goes on, but I saw how you reacted to the mass shootings. This is merely the other side of the coin.

This is what I need, dear friend.

My son needs me, as much as yours needs you. Sadly, my son needs me more. He needs someone to have his back, when it seems that the police, the men he'd wave to with excitement as a little boy, see him as a being worthy only of prison or death.

I need you, too, because I can't do this alone. 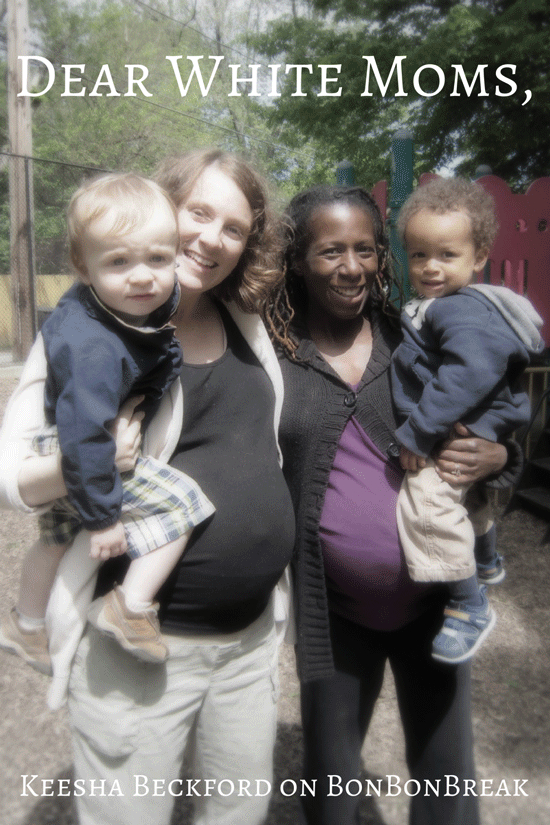