"Dear white people: The minimum requirement of black friends needed to not seem racist has just been raised...to two." Biting satire abounds in this witty, edgy ode to racism in the age of Obama. In his debut feature film, writer/director Justin Simien's perceptive observances take no prisoners. It's a black thang. Time to whip out that old Dashiki, fork out that Afro, put on some Tupac and revel in blackness. 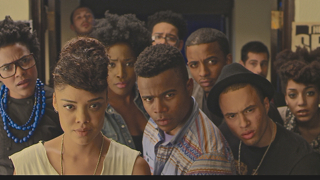 The setting is a small upscale, predominately white Ivy League college dubbed Winchester University. A tiny community of African American students takes refuge in their all-black dorm. The locale mimics the college scene Simien experienced as one of the lone African Americans at Chapman College in Orange, CA. Says Simien, "That inspired me to tackle what I thought would be an interesting new point of view of black experience in America." The filmmaker reflects his thoughts on race relations and black vs. white culture in sharp-tongued conversations spoken by very distinct characters.

Samantha White (Tessa Thompson), a biracial coed, hosts a controversial and racially-charged radio show dubbed, "Dear White People." She is not at a loss for words as she scornfully points out racism, stereotypes and bigotry in a way that challenges people's thinking. You know the sister is on her game when she cites three racist filmmaking atrocities: Birth of a Nation (vile propaganda that spawned lynchings across the nation), Gone With the Wind (happy slaves who love Miss Scarlett) and a Quentin Tarantino retrospective (if you are not chuckling over this last entry, check your pulse).

Sam, an outcast, wants to keep her student resident hall, Armstrong Parker House, all black. But, the dean (Dennis Haysbert) is set on diversification. To spite and thwart him, Sam runs for the Head-of-House position so she can call the shots. She's running against the dean's very popular, All-American looking son Troy Fairbanks (Brandon P. Bell). Shockingly, because there is a God, she wins. Troy, against his father's better judgment, joins the all-white staff of Pastiche, the college's influential humor magazine. Meanwhile Lionel Higgins (Tyler James Williams, from Everybody Hates Chris), a pencil-neck geek journalist with a heavily-endowed Afro, lurks around, spying on everyone for the college newspaper. And a dark-skinned lovely named Coco Conners (Teyonah Parris), whose weave is longer than the Mississippi, is set on kick-starting a reality TV career. She, like Paris Hilton, doesn't care who she has to step on to make that happen.

Simien sets his archetypes in motion. They interact with each other, bed each other, and betray each other. It's almost like you're watching a hip-hop, adolescent Shakespearean play. Add in hostile white students, the N' word, and a white-hosted Halloween party called ""unleash your inner Negro," in which white students eat watermelon and act out black stereotypes and you get the gist of Simien's derision.

Though Simien's own alienated college experience is specific to him, his I'm-here-by-myself sentiments are universal for African Americans who find themselves in the same situation and having to cope. There are just two flaws in his creative strategy: 1) So much of the name-calling and ridicule comes at the black characters' expense. At points you may wish he had toned down the racial barbs and stinging visuals so you could flash back to more comfortable days gone by, like The Cosby Show, or even more pertinent TV's A Different World, when Whitley Gilbert (Jasmine Guy) and Dwayne Wayne (Kadeem Hardison) could solve all their problems in 30 minutes. 2) The plotline moves to a feeble ending--it's almost as if a white writer decided how the protagonist should resolve her issues and with whom.

The entire cast seems dedicated to making their characters come to life. Thompson, Bell, Williams and Parris are equally good, as an ensemble cast should be. If there is a standout, it is not the youngsters, but Dennis Haysbert as the black dean trying to keep his job while working with the white college president.

The cinematographer (Topher Osborn), production designer (Bruton Jones, Lakeview Terrace), costume designer (Toye Adedipe) and musical director (Kathryn Bostic) are on top of their game. Simien's direction is not as strong as his ability to write stinging dialogue. He is great with the actors, not as skilled with choreographing scenes that resemble real time, space and movement. And there are several dead spots in the pacing (Phillip J. Bartell, editor) that kill momentum.

Overall, a brilliant piece of writing from a very thoughtful and humorous director whose take on life is as fresh as the ink on a college diploma.