In the event you've been living under a rock, you may not have heard the uproar that ensued after the ever-controversial PETA aligned themselves with the fear mongering dogsbite.org (amongst others). To say that PETA trends towards making questionable decisions is an understatement. From implementing mass euthanasia at their "shelter" in Norfolk, VA (in 2014 it had a euthanasia rate of approximately 82%) to resorting to assault during their anti-fur campaigns, PETA's actions have been no less than bipolar for decades. Why bipolar? Because in some instances, PETA actually does good (albeit non - limelight grabbing) work. The step that they have taken to align themselves with National Pit Bull Victims Awareness Day shouldn't come as a surprise. It's sensational. It's backwards. It's PETA.

That said, I think PETA needs a refresher on what their own acronym means. The definitions of the words PETA stands for (People for the Ethical Treatment of Animals) according to Dictionary.com are as follows:

People: [pee-puh l] noun; Human beings, as distinguished from animals or other beings.
for: [fawr; unstressed fer] preposition 1. with the object or purpose of 2. desirous of: a longing for something
the: [stressed th ee; unstressed before a consonant th uh; unstressed before a vowel th ee] definite article; (used before adjectives that are used substantively, to note an individual, a class or number of individuals, or an abstract idea)
Ethical: [eth-i-kuh l] adjective; pertaining to or dealing with morals or the principles of morality; pertaining to right and wrong in conduct.
Treatment: [treet-muh nt] noun; an act or manner of treating; action or behavior toward a person, animal, etc.
of: [uhv, ov; unstressed uh v or, esp. before consonants, uh] preposition; (used to indicate possession, connection, or association)
Animal(s): [an-uh-muh l] noun; any member of the kingdom Animalia

Essentially, the group is advertising that they are working towards all animals being treated right and in a good moral fashion. Apparently, in this instance, that includes being breed-ist (akin to being racist towards people). Furthermore, due to their new bed fellows, they are advocating the view that not only are pit bulls dangerous, but that they must be slaughtered en masse. There is nothing moral or ethical about singling out one breed/type/look of dog and declaring EVERY ONE dangerous due to the actions of people manipulating both the nature and nurture of (whether through breeding recklessly or mistreatment) them. Nothing. I claim false advertising.

In continuing to act the way the group has, PETA has essentially declared not only a war on pit bulls, but on dogs. Actually, looking at their bipolar nature on the whole, PETA is declaring a war on animals. By aligning themselves with inappropriate allies, spreading mis-information and representing animal welfare activists as irrational extremists, the group essentially obliterates any value their good work has.

My advice? Let me join the rest of us who remain sane (and sober) in saying: 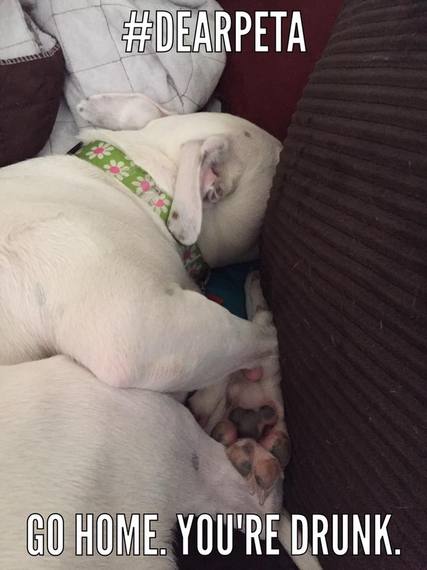 Or, at the very least, go back to school.