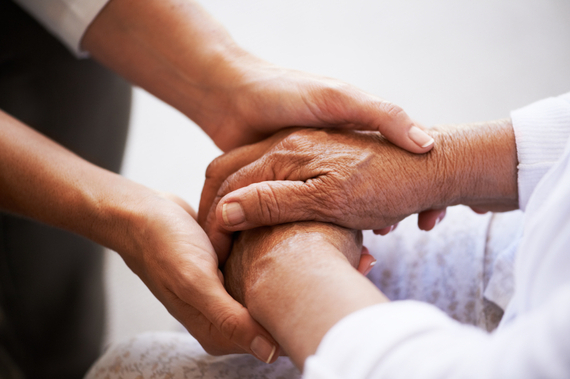 Every doctor has patients we will remember forever for the experiences they bring: the first baby we deliver, the first heart murmur we detect, the first surgery we perform on our own.

Every doctor also has patients we will remember forever for the other kinds of experiences they bring: complaints about everything during every visit (doctors don't control the distance to the parking garage, the selection of magazines in the waiting room, or the temperature of the building) or disparaging posts of dissatisfaction when the patient fails to follow our advice (doctors can only make recommendations, patients decide whether or not to follow through).

But the patients who truly live on in each of us are those who truly touch our hearts.

I've been fortunate to have many such patients over the years: kind patients who ask about my family, patients who bring homemade treats and vegetables from their gardens. Once, a fisherman from Alaska brought a salmon.

They are all precious gems in my jewelry box of memories.

Yet no one made a stronger impression on me than Mr. Johnson.

When I first met Mr. Johnson 15 years ago, he was fairly healthy and had a mild eyelid problem that could be treated in my office a couple of times of year. He and his wife would travel an hour to see me, even though other doctors closer to home could have addressed his problem.

Each time they came, his wife brought delicious homemade brownies that she had made that morning. When we saw his name on the schedule, everyone in the office knew that our collective day would be uplifted by the presence of him and his wife. We would whisper to each other in the hallway, "The Johnsons are coming, the Johnsons are coming." And we could almost smell the brownies from the front desk when they arrived.

Over the years, we got to know each other, as I imagine happens in the offices of many primary-care doctors when they see patients. As a specialist, I treat most patients and then release them to their primary-care physicians. Mr. Johnson, though, had a chronic issue that was annoying but not life-threatening, so I had the pleasure of knowing him for many years.

We chatted about their daughter's wedding, their first grandchild's birth, my grandmother's death, and many birthdays and anniversaries in between.

But as the years went on, Mr. Johnson's health began to decline. His heart began to fail. He underwent some cardiac procedures.

His visits became a little less frequent, a little less jovial. The worry on Mrs. Johnson's face became more apparent with each visit.

One day, the office received a call from Mrs. Johnson who told us that her husband was not well. My secretary talked with her for a while and then told me about the call. I waited until my clinic was done, closed my office door, and called her. We talked for a long time, about easy things and harder things. Mr. Johnson was very weak, she said, but he wanted to talk to me.

She passed the phone to her husband. With labored breath, Mr. Johnson talked about everything but the elephant in the room: the weather, the time of year, the garden.

He sighed heavily and then he thanked me for all the care I had given him over the years.

"I'm not afraid," he said. "I've had a wonderful life." The lump in my throat grew as I tried to reply in a normal voice. As tears ran down my face, I croaked back, "It's been an honor to have you as a patient. I love you." He said, "I love you, too." I hung up and cried for a while before turning out the lights and heading home.

A few weeks later, glancing at the morning paper before I ran out the door to work, I saw that Mr. Johnson had died. The funeral was being held in a town a couple of hours away, in the middle of the week, when I normally had a busy clinic.

After shedding more tears on the way to the office, I summoned my team. I told them the sad news. I told them that we were going to close the office -- for the first time ever -- the day of the funeral in honor of Mr. Johnson. I invited them to attend his funeral with me, if they chose, or told them they could have the day off.

Everyone chose to attend Mr. Johnson's funeral. They hugged his sweet wife and dabbed their eyes. When I met his daughter and introduced myself, she said, "Of course. He talked about you all the time. So did my mom. I'm so glad you came."

In medicine, our goal is health, to make everything better. But sometimes we can't.

Driving home from Mr. Johnson's funeral, I remembered our last conversation. What had he really wanted me to know? What could I learn as my lesson from his life?

The very simple answer came to me: hope.

Hope that all of us are able to feel a connection we cannot see. Hope that every doctor has had a patient we truly loved beyond measure. Hope that our efforts, big and small, mean something to the receiver. Hope that we did, in fact, make a difference.

Starla Fitch, M.D., is an oculoplastic surgeon and partner in practice in Atlanta. She is also the creator of lovemedicineagain.com, an online community for medical professionals who want to reconnect with their passion for the practice.

If you're in the medical profession and you want weekly insider tips and inspiration on how to "love medicine again," click here.