Exactly two months before she died, on February 24, 2010, a SeaWorld killer whale on loan to Loro Parque in the Canary Islands killed trainer Alexis Martinez. I explored Dawn Brancheau's death in an Outside story called The Killer In The Pool. And now, in a story at Outside Online, I dig deep into the death of Martinez, using extensive interviews with his fiance and family, and information from confidential documents, to explore the tragedy.

Here's a photo of Alexis and Dawn together at Loro Parque, taken three years before they were both killed in the space of just two months. 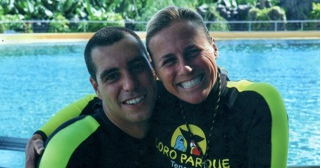 The answer is that some whales will cope or move on. And some, when the circumstances are just right (or perhaps it is just wrong), will react with frustration or aggression. This means that no marine park -- even SeaWorld, which is the best at what it does -- can really claim that killer whale entertainment is risk-free, or is not inherently dangerous. Too many trainers have been injured (some severely), and now with two deaths since Dec. 2009 (Alexis Martinez followed two months later by Dawn Brancheau), it is time for marine parks to be honest with themselves and with the public about what actually goes on between whales and humans in a marine park pool.

This is directly relevant to an ongoing dispute between SeaWorld and OSHA, which says that for trainers to be safe SeaWorld either has to stop performing with them in the water or implement intrusive safety measures that in themselves would change the nature of SeaWorld's popular and lucrative shows. SeaWorld has flatly rejected this conclusion and is fighting OSHA in court.

In the course of reporting the story, I also got access to some behind-the-scenes footage of what life in a marine park can be like for a whale. This is a clip of Keto, the whale that killed Alexis Martinez, reacting to an endoscopy that was performed on him after Loro Parque suspected he had ingested pieces of pool coating. It will probably shock people who are used to thinking of Shamu as a happy performer. But it is important that people understand as much as possible about the reality of marine park life for killer whales if they want to weigh the ethics and morality of killer whale entertainment.

The full investigation of Alexis Martinez's death, and a longer video of Keto's endoscopy, are here. I look forward to any feedback or comments.