1986 was an important year in the War on Melanin Possession and the Indigent (formally known as the "War on Drugs" and practically waged as the War on Black, Brown, and Poor People). Reynolds Allen Wintersmith Jr., the son of cocaine- and heroin-addicted parents, was in the sixth grade. Although his mother had moved her children six times in as many years, Wintersmith still maintained a B-plus average in his Rockford, Illinois, elementary school.

Washington, D.C., has a way of springing into action with swift anti-crime legislation when news headlines and awakened public consciousness so demand. The year 1986 was no different. The catapulting story was the unexpected death of all-American basketball standout Len Bias, who died of a cocaine overdose just days after he was selected as the second overall pick in the 1986 NBA draft. That same year Congress hastily passed the Anti-Drug Abuse Act of 1986, a bipartisan legislative response to the tough-on-drugs zeitgeist. The Anti-Drug Abuse Act burgeoned a new era of harsh mandatory-minimum drug penalties. Most dramatically, the law's 100-to-1 sentencing ratio required judges to impose the same 10-year prison sentence for both a dealer of 50 sugar-cube-sized grams of cocaine base (crack) and a supplier of 5 kilograms of cocaine powder. Mandatory-minimum penalties formulaically neutered judicial discretion, and any consideration of a defendant's individual characteristics and life circumstances became a meaningless exercise.

But Len Bias was not the only notable drug death that year. The year 1986 also was when 11-year-old Reynolds Wintersmith discovered his mother dead of a drug overdose. In the wake of their mother's death, Wintersmith and his younger siblings were sent to live with their grandmother, who was a caustic caregiver and well-known cocaine dealer in Rockford, Illinois. It was in his grandmother's home that adult family members taught young Wintersmith to cook, package, and sell crack cocaine.

As is often the case for so many like him, Reynolds Wintersmith Jr. was harmed by the drug epidemic before he was ever a perpetrator of it. The year before he moved into his grandmother's crackhouse, Wintersmith made four As, and his lowest grade was a B. The year after he moved into the house, Wintersmith made six Ds, and his highest grade was a C. His grades never improved before he dropped out of high school. And although his mother's death, unlike Len Bias' death, did not thrust our nation's legislators into reactive political pandemonium, the federal drug-sentencing policies of 1986 would later impact this motherless son's life in a most damning and undeniable way.

When Wintersmith was 17 years old, his grandmother was sent to state prison for cocaine trafficking, leaving a house full of drug-addicted adults and children to fend for themselves. Wintersmith joined a gang and local drug ring, believing that both would support and protect him and his younger siblings. In 1993 Wintersmith and 19 others were arrested on federal drug-conspiracy charges. Wintersmith, the youngest of his co-defendants, was a first-time offender who had never been convicted of a crime. Arresting officers commented on the dirty and worn shoes on his 19-year-old feet.

In addition to Wintersmith's arrest, the year 1993 was also when the House of Representatives sent legislative bill H.R. 3353, a measure that would have "allow[ed] grants to develop more effective programs to reduce juvenile gang participation and juvenile drug trafficking," to the Senate.

A year later, in November 1994, President Bill Clinton lost control of the House in the midterm elections, H.R. 3353 never passed the Senate, and Wintersmith stood before a federal judge, who reluctantly told him that federal law required him, a teenage, first-time drug offender, to pay the entire balance with his freedom.

Our nation's drug policy is fundamentally flawed, to the extent that it remains unconcerned with Wintersmith's needs as an 11-year-old orphan of the drug epidemic and exclusively focused on his deeds as a 19-year-old drug offender. Unfortunately, for many nonviolent drug offenders like Wintersmith, a criminal case is the first and last time America pays much attention to them.

By the time I met Wintersmith, he was a 37-year-old man who had been imprisoned for almost two decades. He had spent every single day of his adult life in prison. A lot of law had happened in 20 years. The U.S. Supreme Court had struck down the mandatory component of the federal sentencing guidelines and restored the individualized sentencing discretion that Wintersmith's judge had longed for back in 1994. Congress passed the Fair Sentencing Act of 2010, a bipartisan measure that significantly reduced the 1986 Anti-Drug Abuse Act's 100-to-1 disparity between crack and powder cocaine. And the Supreme Court declared that it is unconstitutionally cruel and unusual punishment to sentence any juvenile -- even a juvenile murderer -- to mandatory life without the possibility of parole. By this time it was beyond the point of legitimate debate that Wintersmith's permanent societal banishment offended our prevailing standards of human decency. Yet every step forward in our nation's criminal-justice consciousness over the last 20 years had failed to look back at those like Wintersmith, whose living death sentences are relics of yesterday's unjust drug policies. By the time I met him, Wintersmith had lost every appeal. Myopic courts had rejected all his efforts to avail himself of positive changes in the law. He had even taken his case to the United States Supreme Court and lost.

A lot of life also happened in those 20 years. I was just a high-school sophomore the day Wintersmith received a mandatory life sentence. I never imagined that, someday, I would represent a person who was just four years older than I and had been sentenced to die in prison. Before we would ever meet, I had to pass algebra class; graduate from high school, college, and law school; work for two federal judges; and leave private practice to join the Chicago office of the federal defender. Our paths only randomly crossed in June 2011. I just happened to be the federal defender on call when a woman telephoned our office and asked to speak to a lawyer who could help her imprisoned childhood friend. My first reaction was that the caller had to have been mistaken about the facts of Wintersmith's case, because only in the draconian era could a person be permanently banished from society for a nonviolent drug crime. And we are living in the post-draconian era, right? But as I dug deeper, I realized that not only was she correct about Reynolds Wintersmith's case, but there are so many others like him still serving living death sentences for nonviolent crimes of melanin possession and indigency.

Ultimately, we petitioned and persuaded President Barack Obama to commute Wintersmith's life sentence. In his handwritten letter to the president asking for a chance to experience one day of freedom in his adult life, Wintersmith wrote, "The person I have become is my way of apologizing to everyone I have ever wronged." 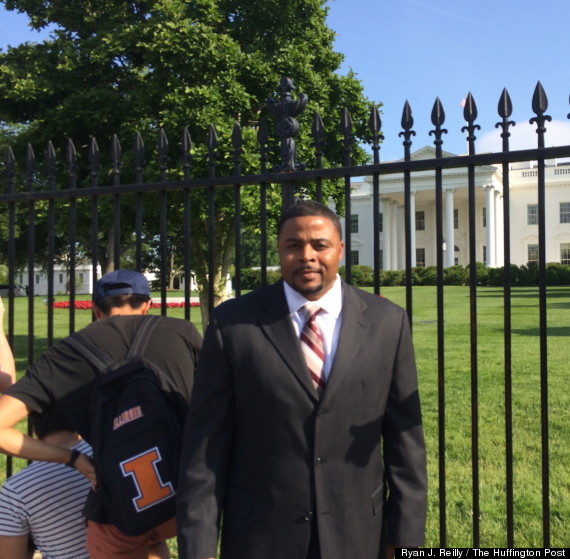 During his 20 years in prison, Wintersmith became a certified victim-impact counselor for the Federal Bureau of Prisons. He discovered a passion for teaching and completed a 4,100-hour apprenticeship administered through the U.S. Department of Labor. In poetic irony, he spent years teaching community-reentry classes to prisoners whose sentences were more forgiving than his own.

As a society, what have we become over the last 20 years? We have watched exponential growth in the number of human beings held by privately owned prison corporations. We failed to notice when Corrections Corporation of America, Inc., the self-described "nation's leading provider of correctional solutions to federal, state and local government," made nearly $2 billion annually in recent years and cautiously reported to our government that "any changes with respect to drugs and controlled substances or illegal immigration could affect the number of persons arrested, convicted and sentenced, thereby reducing demand for correctional facilities to house them." We also failed to notice when CCA's president and CEO, Damon Hininger, recently boasted to shareholders that the corporation is "well-positioned for growth opportunities" in 2014. Meanwhile, over the last 20 years, our public investment in community-based rehabilitation and vocational-training programs has dwindled, and our return on that minimal investment is unsurprisingly dismal.

During the nearly 20 years that lifer Stephanie George spent in prison before President Obama commuted her sentence, she earned her college degree. What have we done over the last 20 years? We have watched the costs of incarceration skyrocket. We now spend approximately $29,000 per year for every federally incarcerated person. We spend more money to incarcerate someone than to college-educate them.

During the nearly 20 years that lifer Billy Ray Wheelock spent in prison before President Obama commuted his sentence, he earned a business-management license. What have we done over the last 20 years? We have watched black and brown communities eroded by mass incarceration. We have witnessed the shuttering of those small businesses for which Mr. Wheelock trained in hopes of someday managing one. We have stood by catatonically as the number of first-time, low-level, and nonviolent federal drug offenders subjected to harsh mandatory minimums has doubled.

According to the ACLU, there are at least 3,278 human beings serving mandatory life sentences for nonviolent drug and property crimes in this country. America will spend over $1.7 billion to keep just those 3,278 people imprisoned for the rest of their lives. For their part, the recipients of commutations by Presidents Obama, Clinton, and George W. Bush, whom we so hastily threw away behind bars for decades, have become lawyers (Serena Nunn), social workers (Peter Ninemire), nonprofit starters (Amy Ralston Povah), business owners (De-Ann Coffman-Ames), authors (Donald Clark), community counselors (Kim Willis) and teachers (Kemba Smith). They have become the most eloquent and compelling declaration that when we fail to rehabilitate our nation's drug offenders, we condemn ourselves as well. They are the best example of what our nation can do when, in the spirit of our collective rehabilitation, we recognize the error of yesterday's legislative mistakes and commit to being better than we were before.

So far, just 10 prisoners have won the current administration's commutation lottery. Inspired by President Obama's recent promise to reinvigorate the clemency process, the imprisoned and their allies are hopeful that more mercy and reason is on the horizon. Who have we become, America? Last Friday, Rep. George Holding (R-N.C.), a former federal prosecutor, sponsored a House amendment that would defund and derail the administration's new clemency-review process. Is that our way of reconciling with all those we have ever wronged?