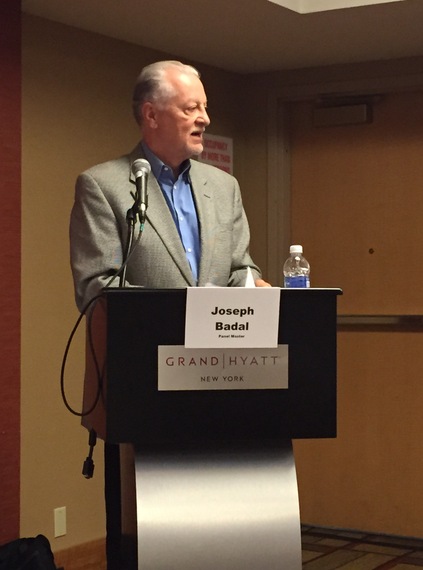 Joseph Badal served for six years in the U.S. Army as a highly decorated commissioned officer in sensitive, classified positions, including tours of duty in Greece and Vietnam. He holds degrees in business from Temple University and the University of New Mexico, and graduated from the Defense Language Institute and from Stanford University Law School's Director College. He had a forty-year career in finance, sixteen of which were with a NYSE listed company. He's authored nine suspense novels and has won many awards for his writing.

Death Ship, the fifth book in the Danforth series, introduces Robbie Danforth, the fifteen-year-old son of Michael and Miriana Danforth, and the grandson of Bob and Liz Danforth.

A leisurely cruise on the Ionian Sea turns into a nightmare when terrorists hijack a yacht with members of the family aboard. Evidence surfaces that something far more sinister than a hijacking is in play. The CIA and U.S. military, with Michael Danforth and his Delta team, must identify and if possible, thwart the threat.

The Danforth Saga is the only thriller series I know focusing on three generations of a family. Tell us about that.
I started the Danforth series as a standalone. The first book, Evil Deeds, was based on the actual kidnapping of our two-and-a-half-year old son, during the time I was stationed with the U.S. Army in Greece. As I got into writing that book, I began thinking there might be a sequel to the story. So it became a family saga series, beginning with the kidnapping and working its way up to the present time. I love the characters, and as you know, my protagonists aren't super-heroes; they don't leap tall buildings in a single bound. I want them to be everyday people confronted with a challenge, and they must decide to either flee or face it head-on.

As I was writing Terror Cell, the second book in the series, I realized most of the other series I'd read had protagonists who never aged. They went on for twenty or thirty years at the same age. I felt that wouldn't work. So, in the forty-five year long saga of the Danforth family, I've had them age in place. As a result, I've introduced Michael, and now Robbie, since Bob Danforth is seventy years old.

Instead of leaping over fences, he'd be falling over them (Laughter).

The old adage, 'write what you know' seems to apply to your novels. How much of your background is in Death Ship and your other books?
It varies from novel to novel.

The first book in the Danforth series, Evil Deeds, was semi-autobiographical, as it involved kidnapping; and I had been stationed in Greece at one point during my army career.

In Ultimate Betrayal, a standalone thriller, there were elements of my personal experiences in Vietnam.

Shell Game, a financial thriller, was based on the capital markets meltdown of 2007 and 2008, which I lived through during my years working in finance.

Each book's characters have personalities based, in part, on people I've known. And, there are elements of personal experience in each of my books, some more so than in others.

Given your former classified positions, have you ever been required to vet your novels with the government before they could be published?
No, I haven't because most of the information I relied on from personal experience is dated and has been in the public realm for a long time. I will tell you if I had been an employee of the CIA, I probably would have to undergo a vetting process.

How did you make the transition from business and the military to writing fiction?
I wanted to be a writer since I was in grammar school. It was a dream I had in the back of my mind for most of my life. When I finally got around to sitting down and writing my first manuscript, it was one of those experiences that was like falling in love. It became an immediate passion. Despite the fact that I didn't know what I was doing, I loved every second of it.

How did you learn to do what you're now doing?
There were a couple of ways.

First, I did an awful lot of studying. I went to conferences. I joined a critique group composed of some wonderful women who knew a great deal about what made for good fiction, and they helped me immensely. Probably the number one factor that helped me become a better writer is my editor. I call him the 'Attila the Hun' of editors. He's brutal, and could care less about my thin skin. He's all about making me a better writer. From the first page of my first manuscript, he mercilessly taught me what to do and what not to do. He's had a great impact on my writing career.

What, if anything, keeps you awake at night?
In my writing career, what keeps me awake at night is my concern that somebody will say my most recent book isn't as good as the previous ones. My goal is to make every single book better in many ways than my last.

Given your background, is there anything about the world situation that keeps you awake these days?
I worry about what's going on with the United States and its position in the world. I think you can see through my novels and their protagonists, I believe America, despite its weaknesses and
faults, is still a force for good in the world. We seem to be disengaging rather than engaging at a time when the world is really in turmoil. I think the less influence we have on world events, it presents more opportunity for evil to exert its influence.

Do you ever struggle with procrastination?
No, never.

Going back to your earlier question, another thing that keeps me up at night is the thought, 'Oh, my God. What if I can't come up with another idea?'

Right now, I have plenty of ideas about things I want to write, and there always seems to be another one coming along. I get so much pleasure out of writing, I tell people all the time: 'If you see writing as just another job, don't do it.'

It is a job requiring discipline and commitment, but if that's all it is, there are far easier ways to make a living. But if you're passionate about it, go for it. I'm more passionate about writing now than I was the day I started.

You mentioned some concern about coming up with ideas. What might spur an idea for you?
That's a wonderful question.

I've written books that have been based not only on my personal experiences, but on stories told to me by friends. My first standalone mystery, Borderline, was based on a personal experience a friend told me one evening at dinner, just before she died. I was so taken with her story, as soon as my wife and I got home that night at eleven o'clock, I sat down and started writing.

I have a three-book series in mind right now based on a story a friend told me about the death of his sister in Hawaii. When I hear these kinds of anecdotes, my passion for writing is reignited to an even greater level.

What's the most important lesson you've learned about writing?
With no writing background other than business writing, I have to say everything has been a lesson.

The most important lessons I've learned are as follows:

Number one is to get the story down on paper. Doing that differentiates you from millions of other people. So many people come up to me and say, 'I have a great idea for a book.' When I ask what they've done about it, they say, 'Well, nothing...'

Everyone's got an idea for at least one book, but what separates the writer from the 'wannabe' is whether or not it's been put down on paper. It doesn't matter how poorly it's written or structured; the crucial thing is to get it down on paper. You can always clean it up later.

I regret those years I thought about writing but never did. They were wasted years I can never get back.

The second lesson is this: it ain't just an art. Writing is also a business. If you approach it as nothing but art, and you think you'll write 'The Great American Novel,' you're sadly mistaken. Today, a writer has to understand it's also a business. He must use social media, speak to groups, and be willing to spend money to market and promote his novels--just the way you would if you opened a retail store. If a writer doesn't want to do these things, he might as well just write for himself.

What do you love about the writing life?
First, it's a creative platform that gives me the chance to do something that's not only imaginative but from which I derive immense enjoyment.

Mark, your books have been very well received, and I know you'll never become so jaded you won't appreciate someone coming up to you and telling you they couldn't put your book down. That's a thrill I still get even to this day. Recently, I got an e-mail from an elderly man; it read: 'I'm eighty-five and you gave this old guy so much pleasure. Don't stop writing.'

I was on a cloud the rest of the day.

You're hosting a dinner party and can invite any five people, living or dead, from any walk of life. Who would they be?
For a good dinner party, you want guests where there will be a little bit of friendly conflict, but not outright war. I would have Elmore Leonard because he was such a gentleman. People would hang on his every word. My second guest would be Leonardo DaVinci, a man whose intellect may never be equaled. Because I believe in what America stands for, I would want Patrick Henry because he was willing to give up his life for this country. I would add Tony Hillerman, the writer, because he was my first mentor, a gentleman who was full of stories. And lastly, I'd have my wife there. She's been my right hand.

What's coming next from Joseph Badal?
I'm finishing the first book, Motive, in a new series, Cycle of Violence. It will be released in 2016.

Congratulations on penning Death Ship, a high-octane suspense-thriller in which good and evil battle for supremacy to the very end.