This is the second installment of a two-part series. Read part one here. 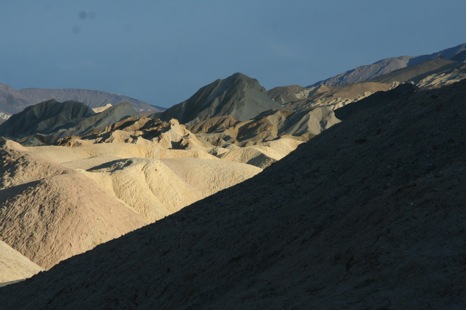 Time heals all vows. And now with family in tow I whisper the Prius north on the same route I took a time ago. But things have changed.

Or have they? First stop is Tecopa Hot Springs, and after checking into the Resort (which looks, on the outside, like a Hitchcockian motel, but on the inside has a bright mineral bath attached to the room), we walk the 75 feet to what looks like a truck stop, but bears the evocative painted sign "Pastels Bistro." Inside the crammed quarters the appointments are post-high-hippie, the hoary stereo plays Louie Armstrong. No cell service or internet connectivity here, so no mobiles or tablets in sight. Cash only. This could be the Way Back Machine, except when the owner/executive chef John Muccio introduces himself and explains his philosophy of slow cooking, natural ingredients and healthy preparations. He hails from New York, escaped Vegas, where he worked in some high-end eateries, and now brings his gourmet sensibilities to this little refuge. "A lot of miners eat here?" I ask, looking around at the hirsute diners, outcasts from Bagdad Café. "Nope. They closed the mine. Just tourists now. Some drive from Vegas just for a meal here." And John pirouettes to the next table, leaving us to chew.

An early start the next morning and we unwind the road, following arrows to a destination that didn't exist my last tour: China Ranch. 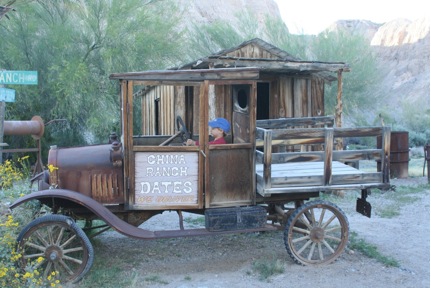 We pour down a tapered canyon that opens to an oasis of date groves, and there meet Brian Brown, who humbly cites four remarkable feats he has authored. He's planted 1200 palms to date, which produce 15 varieties of dates, and makes a living selling the fruits of his labors. As a Conservation Resource Advocate for the Amargosa Conservancy, he helped the only free-flowing river in the Mojave achieve Wild & Scenic designation in 2009. 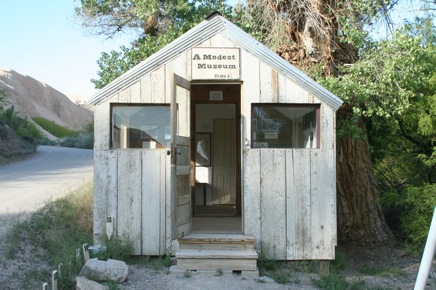 He turned a shack on the property into something he calls "A Modest Museum," showcasing a bit of local and family history. But most significantly, he created the China Ranch date shakes, which now attract pilgrims from around the world to sip and submit to the ecstasy of these creamy wonders. We tried to resist, but it was futile, and spent several transcendental minutes slurping the sublime. 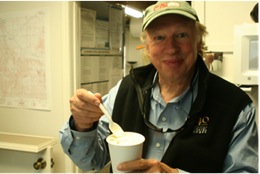 Richard Bangs on a date with a shake; Photo credit: Walker Bangs 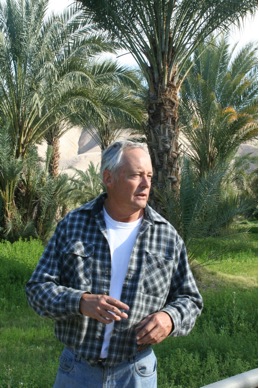 Next north, to Death Valley Junction, where I decide to turn east where the stranger I met long ago said he was developing a planned community with several golf courses. But instead of resort living we find ourselves in the Ash Meadows National Wildlife Refuge. Turns out the stranger was part of a land scam, draining a vast ancient underground water system and the above-ground spring-fed wetlands, which housed, among other creatures, the endangered pupfish. The Nature Conservancy campaigned to save the pupfish, which spawned some in the area to sport bumper stickers, "Nuke the Pupfish" and "Pup the Kill Fish." But Fish and Wildlife successfully took over the land and designed it a National Wildlife Refuge in 1984, so that the pupfish and all in the ecosystem are now protected. We walk a boardwalk in the Point of Rocks area to King's Pool, where we watch the silvery blue pupfish dart about like liquid lightening. Ash Meadows has the greatest concentration of endemic life in the US; second greatest in North America, and while once at the edge of extinction, the zoetic spirit here is today soaring.

When my wife Laura was eight she saw Marta Becket perform dance mimes, and the sight took young Laura's breath away. So back at Death Valley Junction we stop at the white adobe Amargosa Opera House, where the founding danseuse, now 86, is still putting on the show, though from a wheel chair/scooter. Marta fled Broadway and the NY ballet world 45 years ago after a flat tire on vacation brought her to Death Valley Junction. She bought the deserted mining town, painted the old theater with Spanish Renaissance murals, and cherubs in a trompe l'oeil dome, and started to perform her own creations. Marta tells Laura that most ballet dancers end the leaps and twirls by their 30s. Becket refused. She was en pointe at 80. Now she does what she calls "The Sitting Down Show." Laura dreamed of being a dancer, so to meet someone who followed her passion, and designed her life around dance, has her tipping hat in awe.

Continuing west, hacking through the mists of time, we enter Death Valley National Park (President Clinton's doings, designating it a park in 1994, making it America's largest outside Alaska), and find our way to the Inn at Furnace Creek, now owned by Xanterra, the country's largest park concessionaire. The red-tile roof and mission-style architecture look the same, but this time I can afford the meals and the room, and even though I have an Armani sports coat in the trunk, I don't need it. The dress code has relaxed a bit... coat and tie no longer required, but no hats, shorts or t-shirts. Phil Dickinson, the marketing director, tells me the change in policy came about in the 90s when a rock star who was refused a table for wearing jeans took them off, sashayed in, and sat down. There are some other changes as well, says Alex Cabana, the Inn Manager....5000 solar panels now provide 30% of the annual needs; they use a reverse osmosis water system, and the restaurant features sustainable cuisine and shade-grown coffee. 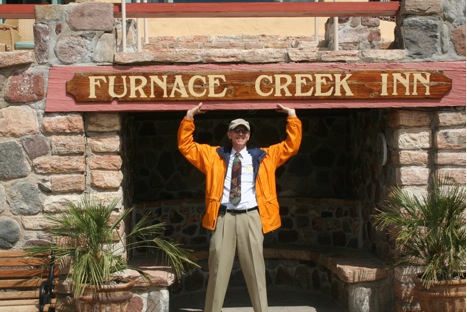 After check-in we make our way to Zabriskie Point, which is as I remember, though perhaps less hallucinogenic. A raving wind whips as it did before, whistling through my ribs. It's difficult to say where the air does not come from. Suddenly Laura's baseball cap goes sailing down a gully. "I love that hat! Can you fetch it for me?" she asks of Walker, my 16-year-old son, and me. It's too sheer to climb down, so we make a trek around the backside, where the canyons feed into a dry riverbed. From there we snarl up the rock apron towards were Laura's hat went flying. It's steep, and the rock spalls beneath us. My foot loses purchase on a pitch, and I flatten against the rock, sticking like a cat, and catch my breath. Then around a little bend we spill into a gulch, shaped like a cornucopia, filled with hats. Hundreds of hats....all shapes, colors and sizes. It's a graveyard of hats. I try to pull a few up, but they are thick with the crust of ages...a petrified forest of hats. There is no sign of Laura's, but as we poke around, I see a familiar design nudging through the dirt....the distinctive Sobek crocodile logo on faded blue cloth. I try to tug it out of the dirt, but it is stiff as a board, deeply encased. I knock a rock against it, but it remains firmly buried, as though sheathed in cement. Nearby though, is a recent addition to the chapeau cemetery, a clean black cap with a "Seattle" logo. I give up on Sobek, and instead grab Seattle, scuttle back down, up and around, and hand the substitute to Laura.

Next we drive to Badwater Basin, lowest and driest sink in the continental U.S., and from the overlook I look across shimmering salt flats to a clear view of Telescope Peak, where a bruise of dark clouds are hovering. I stand transfixed at the snow-coated mountain, interrupted when a ranger asks if I need help. "No, just thinking about my last trip a long time ago....met a girl in a trailer on Telescope Peak, Cathy something, and was wondering what happened to her."

"Cathy Gillies? She's still in Death Valley...has a few kids. You want to visit her?"

"Never got her last name, so I don't think so. But thanks for asking."

In the interregnum Death Valley has changed, as everything does, but here it seems mostly for the better. When, a few years back, I was on the Nile I heard the hypothetical that if Cleopatra's nose had been shorter, the face of the earth would have changed. And I wonder, if I had stayed in that trailer high on Telescope Peak, how would the world be different now? 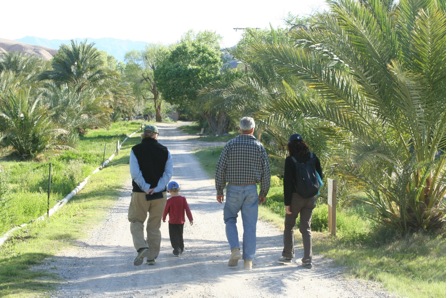