In a secluded corner of Death Valley National Park, strange rocks known as "sailing stones" have been known to move across level surfaces, completely unaided by gravity. We know the mysterious shifts occur because the rocks -- some weighing as much as 700 pounds -- leave behind long trails in the soil. But no one has been able to figure out exactly what causes the stones to move.

Over the years, scientists and laypeople offered all sorts of theories to explain the sailing stones. Some said the stones were blown by strong winds or pulled by magnetic fields. Others blamed pranksters -- or even aliens. Not satisfied with those explanations, a group of researchers and volunteers in 2011 attached GPS units to 15 rocks and placed them in Racetrack Playa -- the dry lake formation where the moving rocks are found -- and sat back to see what would happen.

One of the researchers, Johns Hopkins University physicist Dr. Ralph Lorenz, called the project "the most boring experiment ever."

Two years passed. Then two of Lorenz's collaborators -- Dr. Richard Norris, a paleobiology professor at the Scripps Institution of Oceanography, and Jim Norris, an engineer at Interwoof, the company that developed the GPS trackers -- paid a visit to the area only to discover that it was flooded with water.

It was then that they witnessed the sailing phenomenon first-hand.

"Science sometimes has an element of luck,” Richard Norris said in a written statement released by Scripps. “We expected to wait five or ten years without anything moving, but only two years into the project, we just happened to be there at the right time to see it happen in person."

The researchers determined that the rocks move only under a set of specific conditions. First, water must flood the playa at a level just deep enough for the bases of the rocks to be surrounded by a thin "windowpane" of ice. If these panes are big enough, even a light wind is enough to move the ice-ringed rocks, according to the scientists.

Once in motion, the rocks move in fits and starts, sometimes making abrupt changes in direction as the wind shifts, according to the researchers.

“The last suspected movement was in 2006, and so rocks may move only about one millionth of the time,” Lorenz said in the statement. “There is also evidence that the frequency of rock movement, which seems to require cold nights to form ice, may have declined since the 1970s due to climate change.”

WATCH a video explanation, above. Check out photos from the investigation, below. An in-depth explanation can also be seen on YouTube. 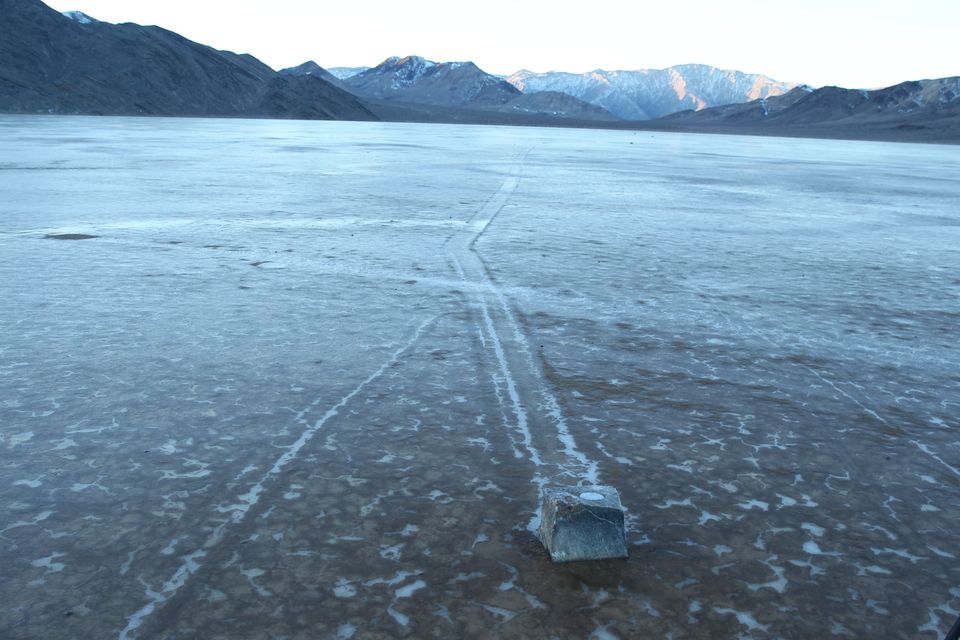 1 / 11
GPS Stone With Trail
One of the GPS rocks with its trail on a cold morning when the pond surface is still covered with ice.
Mike Hartmann