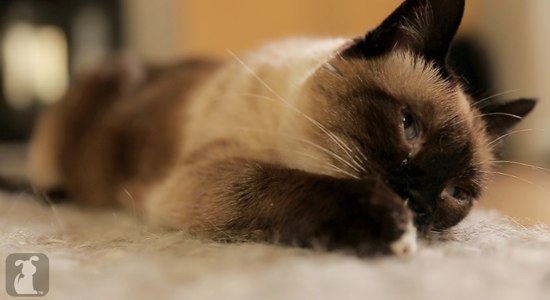 At a few weeks old, Susie became deathly ill with distemper and an upper respiratory infection. She was abandoned by her previous owners and was forced to fend for herself. Miraculously, not only did she survive her condition, she found the perfect home.

Sandra, a board member and foster of the Southern California Siamese Rescue, took Susie to the veterinarian where she was officially diagnosed with distemper, an extremely contagious viral infection. Feline distemper, also called Feline panleukopenia virus, is spread through contact with contaminated bedding, dishes, clothing, shoes or hands of handlers touching multiple cats. According to Petfinder, some estimates say only 1 in 10 affected by the virus survive. For two weeks, Susie's life was in jeopardy. Even though she nearly died twice, the cat rallied back after each scare.

Susie was one of the lucky ones. She recovered from the distemper, although her upper respiratory infection will always affect her sinuses, making her congested and weepy.

Having gone through so much with Susie, Sandra was unwilling to part with her. In addition, Sandra's husband Jock had fallen in love with the cat. Twelve years later, Susie is still with Sandra and Jock. Although the sickness stunted Susie's growth, making her resemble a "sausage," her family loves her no matter what she looks like.