Las Vegas, Nevada -- If I had told you going into Tuesday night's Democratic debate in Nevada that Iraq would come roaring back to the forefront of the campaign, with decisive positioning on the war being done by one of the candidates, how many of you would've guessed that that candidate would be Hillary Clinton? But that's exactly what happened.

The debate got off to a soporific start, with the candidates joining hands and singing Kumbaya when tossed softball questions about the race-tinged rancor that has dominated the campaign in recent days. Obama and the moderators even let Hillary get away with the stunning claim that she was accepting Robert Johnson's ludicrous "Drugs? I wasn't talking about drugs!" routine.

The next 30 minutes were dominated by phony camaraderie and mockable moments: John Edwards saying his greatest weakness was that he is too compassionate and feels the suffering of others too deeply; Hillary fessing up to being impatient when it comes to doing good things for people.

But everything changed when the candidates were allowed to ask each other questions. Clinton seized the opportunity to turn her Achilles heel into a strength by asking Obama to join her in cosponsoring a bill "to rein in President Bush," and force him to come before Congress with any plans that would prolong the U.S. commitment in Iraq. It was a brilliant tactical move, a sweeping gesture intended to blur the huge advantage Obama has as the only one of the three to have opposed the war from the beginning.

By focusing on Bush, Clinton was acting like she was already moving on to the type of argument she would be making in the general election. And she reinforced this when she pivoted away from her Democratic opponents and pointed out how all the Republican presidential contenders had aligned themselves with the president on Iraq, with John McCain ready to commit our troops for another 100 years. You could all but see the fall leaves turning.

Clinton remained on her game for most of the night -- the glaring exception was when she said that she had voted for the 2001 bankruptcy bill but "was happy that it never became law"! One of her most effective moments was her criticism of Obama's support of the 2005 energy bill, which she labeled "the Dick Cheney, lobbyist energy bill." Pounding home her green bona fides while kicking Obama under the table, she managed to slip in that moving "toward clean, renewable, green energy" was "not going to happen by hoping for it." "Hoping." Get it?

And she did not let the "Can't we all just get along?" pretense stop her from refusing to answer in the affirmative when Tim Russert asked whether Obama and Edwards were prepared to be president. And when Brian Williams asked her if she was playing the fear card when she mentioned the terrorist attacks that occurred right after Gordon Brown took office, she got out the hair splitters and tried to make the case that there was a difference between Republican fearmongering and her "recognition, in a very calm and deliberative way, that, yes, we have real enemies and we'd better be prepared and we'd better be ready to meet them on Day One."

In the spin room after the debate, Robert Gibbs, Obama's communications director, and David Axelrod, his chief strategist, pointed out that the terrorist threat she was referring to has gotten much worse because we took our eye off the ball by focusing on Iraq, which she voted to authorize President Bush to do.

Obama's best moments were when he successfully raised the question of judgment -- the inference being that when it came to the biggest issue of our time, Iraq, he'd shown better judgment than Clinton. But by addressing Iraq head on, Hillary was able to defuse Obama's most potent weapon against her. 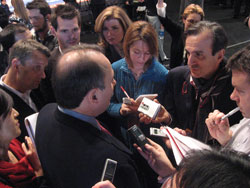 After the debate, I asked Mark Penn, Clinton's pollster and chief advisor, if he thought national security was going to be the central issue in the fall campaign. "No," he said, "the economy will be the dominant issue." Judging by her performance tonight, Hillary Clinton would do well to ignore Penn's advice and keep the spotlight on Iraq and the disastrous impact it continues to have on our national security.