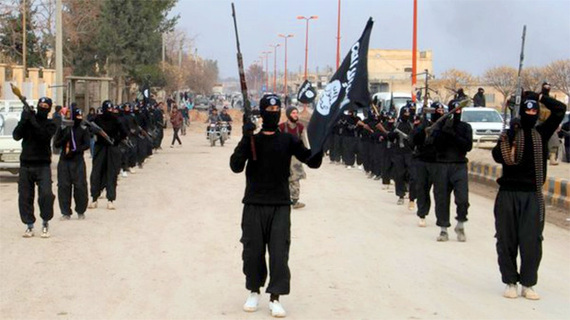 The 2003 regime change in Iraq ignited a different type of militancy in the Middle East. This involved state actors who opposed the Shia domination in Iraq. It started with the emergence of Ba'athist holdouts, including members of the Republican Guard and Fedayeen Saddam -- the latter group having been formed to fend-off a second uprising but ended up becoming an insurgent group. Many of these groups then formed an alliance with al-Qaeda in Iraq (2004) and other groups such as non-Baathist nationalists and Salafist-jihadists, who evolved into the Islamic State in Iraq (2006), and then dissolved and merged to operate under the banner of ISIS from 2013 onward.

The 2003 regime change in Iraq was not only a 'shock and awe' campaign to oust Saddam's Ba'ath Party, but also served as a wakeup call for all regional powers in the Middle East. However, establishing democracy and allowing people to exercise any degree of freedom of expression is still considered a taboo in the region, seeming to pose an existential threat to the national security of many ruling regimes in the Arab World. For many regional powers, extreme radicalism has become preferable to democracy. Virtually all of Iraq's neighbors provided shelter, support and in some cases finances and training to different insurgent groups. Iraqi Ba'athists were able to organize attacks from the safety of Amman and Damascus, while some Gulf States either tolerated or oversaw funding for Salafist-jihadist groups.

In fact, all Sunni-dominated provinces in Western and Northwestern Iraq were already killing zones -- pre and post-ISIS -- posing a threat to any Iraqi who welcomed the U.S.-led regime change of 2003. This was the region the U.S. forces failed to tame, and where they incurred the most casualties during their stay. The U.S. failed to sell democracy to a group who knew they would end up in the minority.

There is no doubt that all political factions are responsible for Iraq's security deterioration, mismanagement and corruption for the past 13 years. However, one cannot say that one power was the dominant player over all. In post-2003 Iraq, political consensus replaced the democratic process by international pressure (as an excuse) to accommodate minorities. This resulted in forcing 60% of the population, the Iraqi Shias, to only enjoy less than 35% of decision making at the Councils of Ministers and Representatives. This arrangement led to crippling the governing process and hindered the passing of much needed federal laws to shape a civil state and implement the terms and directives of the 2005 constitution. Yet, the mainstream media continued to depict Iraqi authority as a Shia-led government, and by regional stereotype, an Iranian-backed regime!

The final result of such a government arrangement (mohasasa -- that is, the political quota system) resulted in the Sunnis and Kurds enjoying the maximum authority, benefits and presence but no accountability, while a multiplicity of factions developed their own plans that conflict with the Federal Union of Iraq. The KRG have always dealt with Baghdad as cash-cow to subsidize their future independence while offering anti-Federal Govternment factions a platform in Erbil to launch their government conferences and political campaigns. As for the Sunni leaders, they initially rejected federalism in the 2005 constitution, but seeing the success of the KRI they eventually lobbied for a Sunni region to emulate the KRG's confederal practice on finance, security and foreign policy. Such arrangements have always contributed to a sectarian and inflammatory atmosphere, which eventually accelerated the insurgency to different levels.

Before the arrest warrant of Tariq al Hashimi in December 2012 and later Rafi al Essawi and Ahmad al Alwani in 2013, most of these groups benefited financially from Iraq's budget allocations to Sunni dominated provinces. Key Sunni politicians have all failed to use the multibillion USD funds budgeted for their provinces to spend on strategic projects and develop local economies. Instead, just like many corrupt politicians across Iraq, they have squandered the cash and funneled most of it to serve personal gains, while some have opted to finance the insurgency through ghost employment and phantom projects. In some Shia areas such as Basra between 2004 and 2008, some organizations followed similar practices, effectively robbing the state through oil smuggling to fund armed groups. This may have given some Sunni politicians a feeling that their own actions were justified in terms of corruption and maintaining irregular armed forces.

In 2013, it was from Anbar province, where the Sunni protests ignited strife against the Iraqi government after December 2012, calling for radical reforms which included many illegitimate demands, while ISIS and al-Qaeda splinter groups moved freely to parade their weapons and fly their flags publically long before the fall of Mosul in June 2014.

Chanting for regime change was commonplace. The protest platforms were supported by almost all Sunni leaders who were expected to be partners of a democratically elected government of the new Iraq. They found it too difficult to accept the democratic outcome which replaced their dominant power pre-2003, even though they were only a minority.

Since the announcement of the ISIS Caliphate in mid-2014, militancy moved to a different level that required resources far beyond the traditional financial and logistical support that al Qaeda enjoyed. In less than 6 months after the occupation of Mosul, ISIS managed to:

Given the above reasons, the evolution of militancy in the region has moved forward a light year compared to the conventional militancy of groups such as the Armed Islamic Group of Algeria in the 1990s. Such militancy cannot possibly survive on traditional means of localised or fundraising organizational support. I therefore think that the war on terror will continue to evolve into more a dangerous form that has never been seen before if the "day after" ISIS defeat is not managed well. If the international community does not confront regional sponsors to reconcile their differences and put an end to this sectarian conflict, we will see ISIS version 3.0.

In a nutshell, talking about ISIS as external threat is a laughable matter - the enemy is within and this is an unconventional sectarian war that fought by regional proxy state actors.