A Republican lawmaker in Texas told a college student on Facebook he should move to Afghanistan.

State Rep. Debbie Riddle (R-Tomball) posted a public Facebook status on Sept. 19 showing her opposition to cultural sensitivity training in predominately Muslim countries, as The Horn notes. "Our soldiers do NOT need to be taught how to be sensitive to radical Muslims," she wrote. "They do not need to be worried about blowing their nose wrong or using their left hand and offending someone. They need to just be focused on winning wars & protecting our country." She also added a vote for President Obama is a "vote to destroy our country."

The post inspired dozens of responses including one from Robert Poppenhusen, who said "I would rather the Muslims be given sensitivity training on how not to piss off Americans. It would save a lot of them from lead poisoning."

Abdul Pasha, a UT alumnus who is now a law student at South Texas College of Law, responded "I would rather have Robert Poppenhusen be given sensitivity training on not sounding like a bigot. It might make this thread a bit more civil...but probably not." Pasha's comment received 64 "likes."

Which is when Riddle stepped in to criticize the college student.

"Get a grip fellow - if you want to be an American act like one and be proud of our country and stand up for our military. If you can't do that then go where people are sensative [sic] enough for you - I guess that would be Afghanistan - where they still live like they are in the Stone Age - but still very sensative [sic]," Riddle said.

Pasha responded he would go to Afghanistan, "but only if all of yall come with me and see the truth rather than relay on what Fox News feeds yall. And, I don't have to 'act' like an American. I am an American and I'm not going anywhere."

Riddle responded sarcastically, saying "I guess it is OK that the Muslims kill and torture people when they get their feelings hurt. I guess we should not have 1st Amendment rights - we might hurt your feelings." Then she suggested Pasha shouldn't insult anyone who's old enough to be his parent, "because we have lived more life and know a little more about the real world than you do."

After that point, both Riddle and Pasha seemed to stop commenting on the thread.

(SCROLL DOWN TO VIEW THE FULL CONVERSATION)

Pasha later told The Horn he felt targeted because of his name and ethnicity.

“Because of my name and what I look like and my skin color, she is saying I should go to Afghanistan and that I am not a real American,” Pasha told The Horn. “She should be a leader rather than telling a 23-year-old to go to Afghanistan. I am an American citizen. I don’t need to go anywhere."

Pasha left Pakistan with his parents when he was a child and immigrated to the U.S.

Riddle is actually no stranger to controversial statements.

In 2003, she said "Where did this idea come from that everybody deserves free education, free medical care, free whatever? It comes from Moscow, from Russia. It comes straight out of the pit of hell."

In a 2010 interview with Anderson Cooper about the threat of "terror babies," Riddle was unable to provide any evidence there was a long-term plot to have pregnant women come to the U.S. as tourists to have babies then go home to raise them to become terrorists. She had reportedly referred to them as "little terrorists" to a CNN producer. 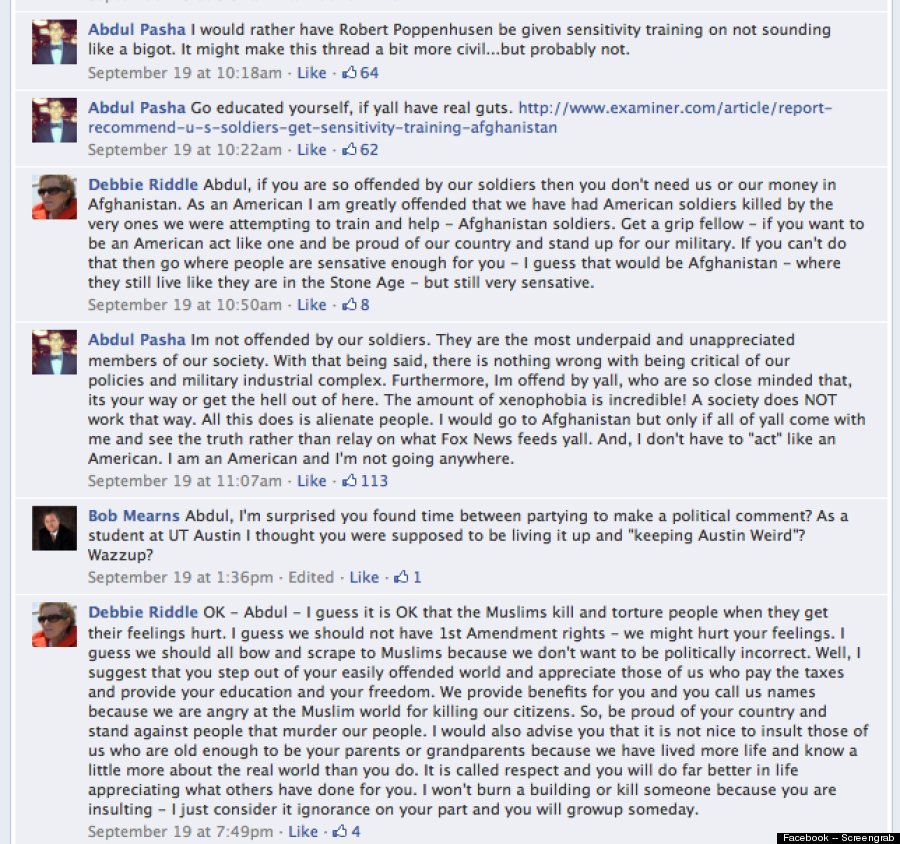