British department store Debenhams has been embracing female beauty in all of its forms as of late. Back in January, plus-sized mannequins were displayed in store windows. In February, the store hired a wheelchair-bound model for their advertising campaign, where she was photographed with plus-sized and petite models.

Now, the Daily Mail UK reports that Debenhams has banned airbrushing in its upcoming swimsuit campaign:

A sign in the Debenhams window will read: 'We've not messed with natural beauty; this image is unairbrushed. What do you think?' It will also show customers an example of just how much the image could have been altered. 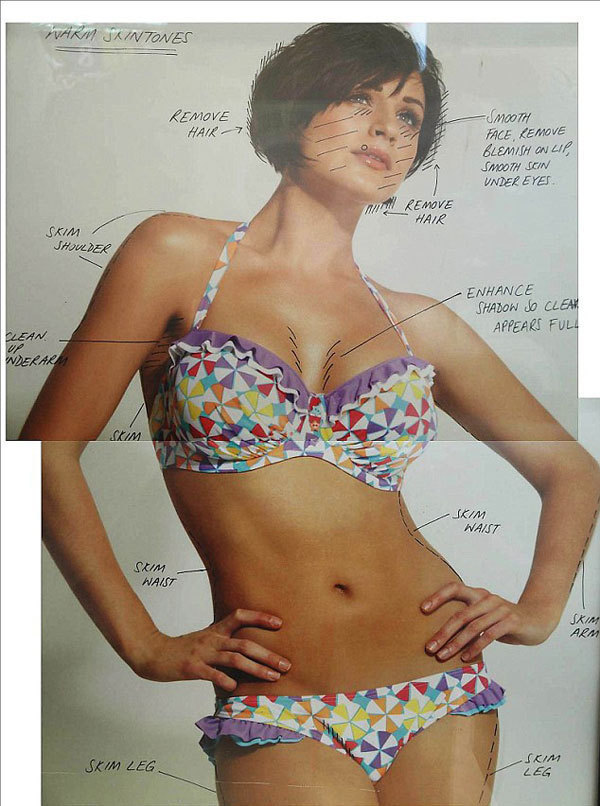 (The image above depicts what changes would have been made to the photograph if it had been edited. It, along with other similar pictures, will be displayed in Debenhams store windows.)

Liberal Democrat member of Parliament, Jo Swinson, has encouraged the rejection of airbrushing through her Campaign for Body Confidence. She hopes that Debenhams' unedited images "will demonstrate [...] that swimwear modeled by real women who have not been retouched can sell just as well as products advertised with extensive airbrushing, which has become the norm."

The chain will run the un-airbrushed window displays and advertisements in its Oxford Street store to gain feedback from customers and staff before expanding the campaign to all of the UK.