If you've ever gazed into the beautiful void that is Gustav Courbet's "The Origin of the World," you're probably familiar with just how provocative (and NSFW) the painting is.

So, you can only imagine what would happen if someone -- let's say, a daring performance artist -- attempted to reenact the racy anatomic still life from 1866... in front of an audience of museum patrons assembled at Paris' Musée d’Orsay.

Do you have a clear picture yet? Now compare that to the video below, in which Luxembourgian artist Deborah de Robertis actually transforms painting into performance, by revealing her own vulva in front of some surprised passersby. Just watch (and remember, it's not safe for work):

According to Le Monde, the racy act took place on May 29 at the Musée d’Orsay's Room 20. De Robertis entered the room in a gold sequin dress and proceeded to expose her own "L’Origine du monde" to a crowd of unsuspecting security guards and applauding gallery goers. The artist was eventually taken away by police and, as Artnet reports, the museum and two of its guards subsequently filed sexual exhibitionism complaints against the bold woman.

“This is a typical case of disrespecting the museum’s rules, whether for a performance or not,” the Musée d’Orsay’s administration said in a statement published in Artnet. “No request for authorization was filed with us. And even if it had been, it’s not certain we would have accepted it as that may have upset our visitors.”

De Robertis feels differently. “If you ignore the context, you could construe this performance as an act of exhibitionism, but what I did was not an impulsive act,” she explained to Luxemburger Wort. “There is a gap in art history, the absent point of view of the object of the gaze. In his realist painting, the painter shows the open legs, but the vagina remains closed. He does not reveal the hole, that is to say, the eye. I am not showing my vagina, but I am revealing what we do not see in the painting, the eye of the vagina, the black hole, this concealed eye, this chasm, which, beyond the flesh, refers to infinity, to the origin of the origin.”

To be fair, de Robertis claims she's performed "Mirror of Origin" more than once in the Paris museum, without causing hysteria. And it's not the first time that an avid student of art history has opted to demonstrate the sincerest form of flattery by imitating a famous work of art. Just last year, a 26-year-old known as Arthur G. stripped down to his birthday suit in front of the Musée d’Orsay’s parade of male nudes, “Masculin/Masculin."

As the Guerrilla Girls pointed out in the 1990s, less than 5% of the artists in the Modern Art section of New York's Metropolitan Museum were women, but 85% of the nudes were female. Does it take a nude performance artist disrupting a casual day of museum revelry to make the world notice? Let us know your thoughts on de Robertis' performance in the comments. 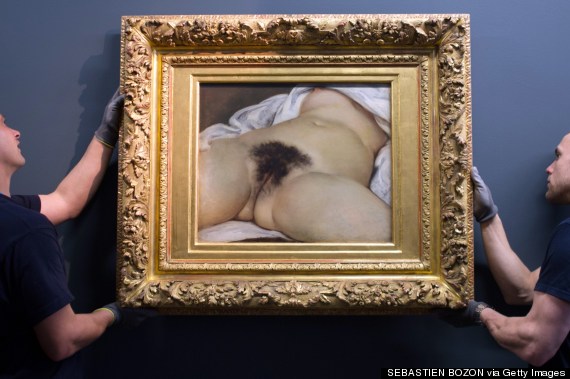