Deborah Kass is not soft spoken. Nor is her art work, which appropriates pop culture icons and artists she admires, while redefining New York School abstract painting through the lens of feminism. Today, Kass' first retrospective, "Before and Happily Ever After," opens at the Andy Warhol Museum in Pittsburgh. The exhibition features approximately 75 of Kass' works spanning the past three-decades of her career.

After her move to New York City in the 1970s, then 20-year-old Kass entered the art world with her more traditional landscapes and abstract paintings. In the '80s however, the tide changed with the emergence of neoexpressionism, which was "completely and utterly male," as Kass put it in a phone interview with The Huffington Post. "The definite prevailing sense with their success and with their attitude, was that this was the natural order of things. And no one seemed concerned or the least interested at all that there were literally no women involved."

Kass channeled her frustration in a way that shook the art world. She appropriated Andy Warhol's work, and turned her lady heroes into her subjects, painting the likenesses of Gertrude Stein, Sandy Koufax, and Barbra Streisand.

We spoke to Kass on the phone about her upcoming exhibit at The Warhol Museum. Read on for Kass' charged, poetic descriptions of her work, how we define ourselves through culture, and why we need female artists. Scroll down for photos. 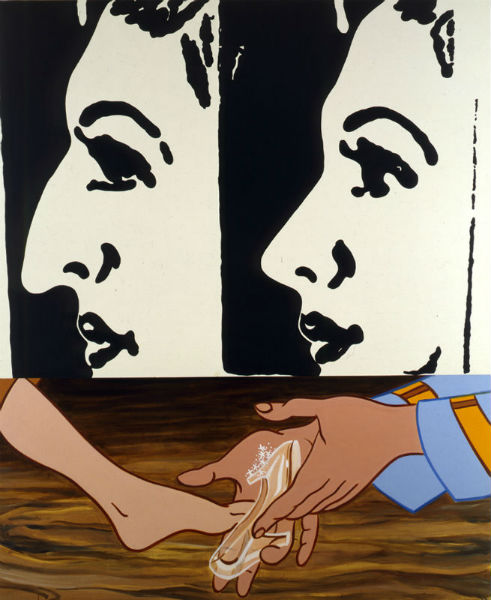 The Huffington Post: From where did your use of appropriation in your work emerge?

Deborah Kass: Appropriation was the language of my generation in many ways. It came out of Duchamp, Warhol, Johns, Lichtenstein. My work since the late '80s specifically questioned what was presented as the "natural" order of things in the history of post war NY painting. In effect I was questioning power and artistic genius and I was asking was this not just part of that same value/valuing system called white patriarchy? And can there even be anything new about an art that re-inscribes those values? By questioning that, I put in jeopardy the assumed power and value of my male colleagues. That could not stand and I have had the career that was the result of that: undervalued and under represented, like every other woman who dared to paint of my generation.

So it's strange to be getting attention now after all these years. But times have changed, meaning the context has changed. People like me in other disciplines were pioneers of women's studies, queer studies, black studies in the '80s. Your generation was educated by those radical thinkers who changed the way we conceive of the history of culture in literature, the law, the media and in every way. The academy embraced and supported them. I mean they were a bunch of serious bookish literature professors!

HP: Can you talk about your famous Barbra Streisand re-appropriation specifically?

DK: Barbra was someone who insisted on patrolling her own representation in Hollywood and it drove Hollywood crazy. Of course she was wildly successful because of that. But there was so much resistance to her despite the bigger embrace of her culturally. Because she went against the norm in Hollywood...like I was sort of obsessed with her resistance because I identified with it so closely...I have this whole idea now -- well its been developing now for thirty years -- that you find yourself in culture as a child and that’s how one defines oneself. One says, “Oh, I really like that song"...“I like that character”..."I like that book," and that’s how. It’s something that’s resonating within you. It's a way that you define yourself through the culture.

Part of my project has been talking about not finding my reflection. And what that felt like and what that means and how to find it anyway or redefine...my favorite history to make it look like me.

HP: Do you consider yourself a political artist?

HP: In the "Brooklyn Rail," you say: “There are more important issues than someone thinking they are right about a historic moment, even if the moment is now. We need all the option on the table to survive right now.”

Where did you get this sense of immediacy? Have you always had it, or has there been a time when it’s more pressing?

DK: I am not alone in thinking that we are at a tipping point ecologically and morally and politically. Democracy cannot survive without a vibrant middle class, yet the policies of one of the parties has been committed to wiping it out for 30 years. Social issues have been used to distract Americans from their own self interests since Nixon's southern strategy and now people are paying the price. It's as if someone was yelling "abortion! religion! gay! black! women! poor people!" to your face, just so they could pick your pocket from behind and it worked.

All the other immediacies of my adult life have been building up to this. I never understood how people couldn't see it coming for the last three decades, it was so clear. The other recessions didn't carry with them the massive unemployment, the income inequality and the death of the middle class like this one, and the sheer unadulterated greed. Nor the rejection of science and the reality of global warming. The end times. Citizens take democracy for granted, but that is a huge mistake. We took the middle class for granted and now look.

DK: [Take as an example] John Berger’s “Ways of Seeing,” there’s no woman in the world or black person in America who doesn’t know what that means. The people in power are the people who define everybody else. That’s the nature of power. And survival depends on understanding.

"Deborah Kass: Before and Happily Ever After" runs through October 27 through January 6, 2013 at The Andy Warhol Museum in Pittsburgh, Pennsylvania.

Deborah Kass: "Before and Happily Ever After" at The Warhol Museum