We first met Debra Diamond when at Pitchapalooza in Politics and Prose, one of the great book stores in America. She has completed an amazing journey from Wall Street money manager to artist, psychic and published author. We thought we'd check in with her and see what she has to report. 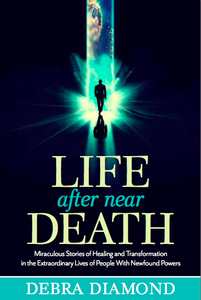 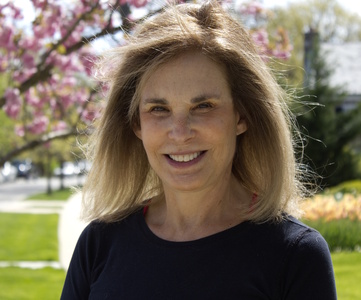 The Book Doctors: Why did you decide to do something as ridiculous as write a book?

Debra Diamond: You have this idea and think, "I'm going to write a book," and don't realize until you're down the road what you've gotten yourself into. It's overwhelming and exhilarating, and challenging and while I wrestled the book to the ground, I often thought, "What the hell am I doing?"

I always wanted to write a book and have been writing my whole life, although some of it was in my former work on Wall Street. Growing up, I was a big reader. I knew I wanted to write a book and first tried my hand at fiction. That was like getting my MFA or being thrown into the deep end and trying to keep my head above water. Writing a book is hard. It's even harder if you don't know what you're doing, which I didn't. The first manuscript had some good moments but let's just say this: I'm leaving it in the desk drawer. Life After Near Death is actually my third manuscript. I had the idea of doing research on near-death experience aftereffects, which are not well understood or researched. After I finished the research, the next step was putting the information into a book.

DD: I started out in a writing group in Taos, New Mexico. The teacher was excellent. Everyone in the group had to learn how to do critique, to understand what worked and what didn't in our writing, and why. That helped me to understand what writing was about a bit better. From there, I was juried into a writing group at the 92nd Street Y in New York, wrote in a workshop at the Writers Center in Washington, DC, and attended writers conferences, listened to speakers talk about their craft. I read every book I could get my hands on and paid attention to how writers do their jobs. But the best way to learn to be a writer is to write. Practice. Practice. Practice.

TBD: What are some of your favorite books and writers, and why?

DD: I love Mary Karr. The Liars' Club was dazzling, and what it did for memoir was noteworthy, creating a new template in an existing genre. Michael Lewis because he can take a dry topic (Wall Street) and bring it to life. I especially like Home Game: An Accidental Guide to Fatherhood because he makes some comments in that book that most of us would never say, much less reveal in a book for the public.

I love thrillers and am in awe of those authors who can juggle conflict, character arc, multiple plot lines, spicy dialogue and compelling settings as if they're writing a late-for-school notice. I started reading Dennis Lehane back in the early '90s with A Drink Before the War and Darkness, Take My Hand. I like Joseph Finder and local Baltimore author Laura Lippman because both of them know how to tell a good story.

TBD: How did you go about getting your book deal?

DD: I decided to give traditional publishing a try. It can often take years to find an agent and publisher and then another 18-24 months after that until the book comes out. I wanted this book to be published sooner so I made up my mind that I'd try to find a publisher for a few months, and if that didn't work, I'd self-publish.

I wrote a query letter that went out to over 200 publishers that I thought would be interested in the topic. The list included college and academic presses, small and intermediate publishers, theological book publishers, publishers in the spirituality and new age categories and the big five New York publishing houses.

The query letter was short but concise, three paragraphs long. The first paragraph described the book (research on a universe of more than 50 people and specific near-death aftereffects including mathematical gifts, enhanced hearing, improved eyesight, electrical sensitivity). The second paragraph explained my marketing approach, and the third paragraph was my bio (former Wall Street money manager and artist who left a high profile life to pursue a life of purpose and spirituality, former regular commentator on CNBC).

Fifteen minutes after the query letters went out, my email inbox was flooded. I had over 35 requests for the book proposal and am still receiving them. The responses ran the gamut from one publisher who said, "With your background, I know you're going to go with a New York publisher and don't want to get my hopes up," to one of the Big Five where four different editors approached me for a proposal to one publisher who emailed me a contract without any preliminaries. I had multiple offers. I didn't have an agent, so I had to go out and find one. I chose a publisher who fast-tracked the book. It will be released in January 2016, one year after the query letters went out. 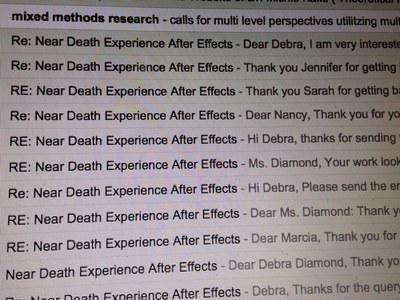 TBD: How does you work as a psychic affect your work as an artist and a writer?

DD: I'd like to say that I just close my eyes and everything instantly comes to me. The truth is, I'm just like everyone else. Writing, art or any of the creative endeavors, require hard work and discipline. I have to sit down and do the work just like everyone else. There are no short cuts. I may be open at times because I'm a psychic, but that doesn't get the book written or do the research or make the work of revising any easier. In truth, lots of creative people are open, and if they're lucky, find that thread of an idea that wants to emerge. If they're very lucky, they can access it and nurture it. Being psychic may help the creative process incrementally, but I'm just like everyone else who is searching for the right words, the right phrase, the right image. I still have to do the work.

TBD: How would you react to skeptics who say that clairvoyance is not possible?

The truth is, I'm not trying to convince anyone of anything. I think many people have had experiences for which there is no logical explanation. Sometimes we can look outside ourselves for answers. But for some people, no matter what I tell them, they'll never be convinced. And that's okay. It's not my job to try to convert anyone.

TBD: What advice do you have for artists starting their own businesses?

DD: Being in the arts, as an artist, writer, musician, is tough.

I might suggest that they have a steady full-time job until they can build up enough of a business that they can afford to become a full-time artist (writer, musician) because it takes time and you have to eat in the meantime.

TBD: I hate to ask you this, but what advice you have for writers?

DD: Keep writing. It's how you get better. Don't give up. I met a woman at a writers conference who had a book coming out. I asked her how many books she'd written before she got this one published and she said, "Eighteen." I'm not sure if that's extreme, but I know that you have to keep going. I look at writing the same way I look at all businesses (and I came out of the business world where I watched businesses develop and grow). It takes time, grit, focus, hard work; plus you have to have something that other people want. If you write a book that no one is interested in reading, it might not help you get to the end destination. A lot of things have to break the right way to skew the odds in your favor. You have control over some, and not others.

Debra Diamond is a former Wall Street money manager and artist who left a high-profile life to pursue one of purpose and spirituality. In 2008, she had a transformational experience that left her with unconventional powers as a clairvoyant and medium. As an investment professional, Debra was a professor at Johns Hopkins University and a regular commentator on CNBC. She was profiled in the Wall Street Journal, Forbes, the Washington Post, the San Francisco Chronicle, and the Baltimore Sun. She has an MBA from George Washington University and is a graduate of Christie's Education and the Jung Institute. The mother of three sons, Debra splits her time between Taos, New Mexico, and the East Coast.