The three charts below offer insight to the rottenness at the core of a banking and political system that relies entirely on the money of others--taxpayers, pensioners, those who pay insurance and, most disturbingly, future American earnings--to create short-term, private-sector income around housing and finance. With these profits, the banking system deals in politicians by offering political bulletproofing in the form of low-cost financing for housing using--you guessed it-- other people's money.

Until we deal with this problem, which is deeply entrenched in our election finance system, our government will continue to borrow and tax us to serve its short-term interests even as our lives become more expensive and offer less in return.

First, take a look at our Long-Term Debt: 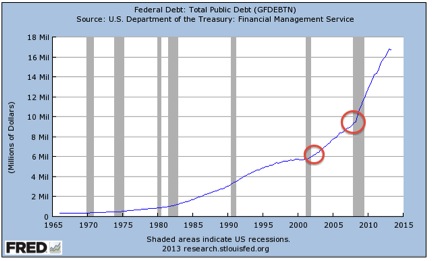 Our nation's leviathan debt expansion began in 2001. The War on Terror and President Bush's Medicare Part D--each implemented without proper consideration for costs, the possibility of a long, protracted war, US healthcare monopolies and our out-of-control drug pricing.

Debt exploded in 2008 as the US government provided a multi-trillion dollar safety net to insolvent banks while attempting to provide a cushion for individual citizens in the form of social services, which exploded following the spike in unemployment (caused in large part by the lending contraction from the banks).

The stunning chart below shows what happens when an extractive alliance between bankers chasing bonuses and politicians chasing votes. The game is cemented by profits generated by banker custody of the money of others in order to finance housing. These profits are partially invested in the pockets of those politicians willing to continue providing favorable legislation. And, of course, the illusion of growth helps keep these elected officials firmly in control of their congressional seats.

The chart below is represents more than a century of housing data. Look at the stunning distortion in home prices this extractive alliance created. 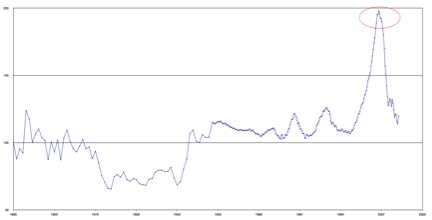 A few things drove this. In no particular order:

Politics - Homeownership became a political metaphor for freedom and the "American Dream." Left-leaning politicians even articulated it as a right as important as freedom of speech and religion.
Private-Sector Marketing - Like diamonds or tulips, billions were invested in the glamorization of homeownership as the peak of adult social status.
End of the 30-Year Bond - Treasury Secretary Robert Rubin abolished the 30-year bond, forcing pension and insurance portfolio managers to move billions of dollars into the only government-backed 30-year duration investment left, which just so happened to be housing bonds sold by thegovernment agencies Fannie Mae and Freddie Mac.
Zero percent interest from the Federal Reserve
New Default Swapping Derivatives - These instruments were designed to eliminate all risk from banks and transfer it to the investment pools of insurance companies and pensions.
The housing price collapse seen in the chart above precipitated lending contraction, which led to layoffs and a slowdown in new business formation. This, in turn, caused a spike in unemployment which exacerbated the housing decline in a vicious cycle as the newly jobless could no longer buy homes or pay mortgages

Check out the spike in long-term unemployment below:

When faced with all of this in 2008 and 2009, our President and Congress decided to ignore all of the underlying factors and rely on our central bank to manufacture trillions of new dollars to stabilize the banks while allowing our debt to spiral out of control and looking to increased taxes to stanch the bleeding. All of this was driven by the decline in housing, where the bankers and politicians had all of our eggs stored. The unemployment some politicians ascribe to a softening of American spirit was actually caused by the reckless lending from banks and our government in between 2001 and 2008.

The reason our politicians consent to the madness represented in these charts is that they work for the 150,000 people in America who finance our elections, rather the 300 million people whose money they spend.

In a nutshell, until we reform our banking system to eliminate "Too Big Too Fail" and reform our political system to be less corrupted by the 150,000 folks who finance it at our expense, the mainstream dialog is nothing more than useless distraction.