WASHINGTON -- In the midst of a press conference on the ongoing negotiations over raising the debt ceiling, President Obama had a suggestion for pollsters. Come up with a poll question explaining that a government default will spur "another recession," the president said, and a majority will come to support his position on the issue.

Recent survey data does support much of Obama's argument. A majority of Americans are worried about what might happen if the government defaults on its obligations. The challenge for Obama is that Americans are even more worried about the potential for greater spending and increasing debt.

The president's comments followed a question citing a June CBS News poll that found just 24 percent favored raising the debt limit to avoid economic problems, while 69 percent opposed raising the limit. "Isn't the problem," asked CBS News reporter Chip Reid, "that you and others have failed to convince the American people that we have a crisis here?"

Recent polls support the president on that point. A Pew Research Center survey conducted this past week found that only 18 percent of Americans say they understand very well "what would happen if the government does not raise the federal debt limit." Another 37 percent say they understand it fairly well. That leaves nearly half of Americans who say they don't understand the issue, either not too well (27 percent) or not at all well (14 percent), or who say they are unsure (4 percent).

Obama next turned to the way question phrasing might influence poll results. "[I]f you said to the American people, 'Is it a good idea for the United States not to pay its bills and potentially create another recession that could throw millions of more people out of work?' I feel pretty confident I can get a majority on my side on that one."

While no polls have asked that question exactly, the one that comes closest supports the president's position. The same newly released Pew Research survey finds that 75 percent of Americans say they are very or somewhat concerned that "not raising the debt limit would force the government into default and hurt the nation's economy." And those concerns have increased from 63 percent of people who were very concerned or somewhat concerned in May. 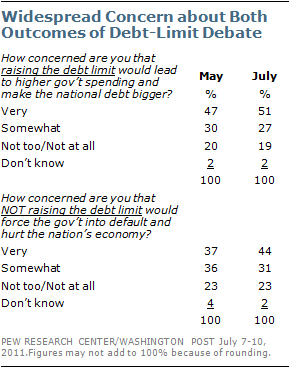 The problem with the president's argument is that a slightly larger number (78 percent) continue to be very or somewhat concerned that "raising the debt limit would lead to higher government spending and make the national debt bigger."

The underlying conflict of opinion -- the roughly one quarter of Americans who express concern about both raising the debt ceiling and not raising it -- is what makes polling on this question volatile and difficult to interpret.

So in this case, Obama is right that results depend heavily on "how you phrase the question." Consider the following table, which shows results for the CBS News poll cited in the press conference as well as five more polls (created since March) that asked Americans in a variety of ways whether they support or oppose raising the debt limit. 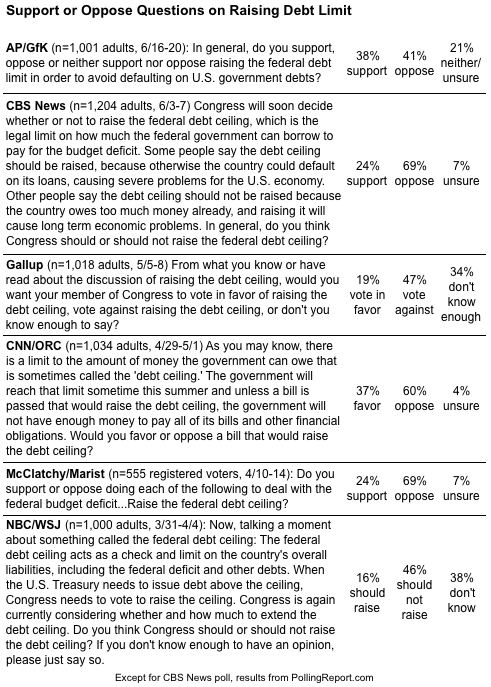 But note the impact of question wording and format for the results from March through early June. While none of the questions shows a majority willing to support raising the debt limit, the responses vary considerably. More than a third of Americans said they "don't know enough to say" in the Gallup and NBC/Wall Street Journal polls, both of which offer that explicit response. As a result, opposition to raising the debt limit in the polls varies from 41 to 69 percent.

Two of the questions convey some of the language that Obama suggested. If the government does not raise the debt limit, the CNN question explains, it "will not have enough money to pay all of its bills." The CBS News question adds that "the country could default on its loans, causing severe problems for the U.S. economy." But none refers to a "second recession" or the prospect of millions more out of work, and each also includes a counter argument. Obama may be right that more vivid language would produce more support for his position on a poll, but the real question is what happens in reality, when counter arguments are unavoidable.

Finally, none of these questions poses the tradeoff now central to the debt negotiations: the prospect of a deal that combines an increase in the debt limit with significant cuts in government spending and increases in revenue. The recent AP/GfK survey posed a three-way choice that comes close. It finds three out of four Americans (34 percent) opting either for increasing the debt ceiling "to avoid a default on federal debt, and discuss spending cuts and deficit reduction separately" or only increasing the debt ceiling if Congress "makes significant spending cuts at the same time, even if that means there will be considerable reductions in government services and programs" (43 percent). Only 18 percent chose the third option, that "Congress should NOT increase the debt ceiling under any circumstances, even if that means the U.S. defaults on its debt."