WASHINGTON -- Although the Obama administration is warning that a federal default will mean "lights out" for the U.S. economy, two new public polls show that Americans are divided on the urgency of the looming debt ceiling crisis -- and that they're more confident about President Obama's handling of the issue than that of Congressional leaders from both parties.

A Pew Research Center survey finds the nation evenly split on the urgency of raising the debt limit. When offered a choice, 40 percent of adults say they consider it "absolutely essential to raise the federal debt limit by August 2 to avoid an economic crisis," while 39 percent say the country can go past the August 2 debt limit deadline "without major economic problems."

The Pew Research analysis shows polarization on that question across party lines, with Democrats more committed to raising the debt limit (56 percent to 28 percent) and Republicans more worried about the economic consequences that they say would result from such a move (53 percent to 30 percent). Skepticism regarding the economic fallout of a debt limit-increase is greatest among Tea Party Republicans. Roughly two-thirds of Republicans who agree with the Tea Party (65 percent) rejected economic crisis as a rationale for raising the debt limit, compared to just 45 percent of all other Republicans.

The Pew Research survey asked a similar set of questions, reported separately and in partnership with The Washington Post, confirming the lack of confidence Americans have in their leaders on this issue. Americans are divided on Obama, with roughly the same number saying they have a great deal or a fair amount of confidence (48 percent) and saying they have not too much or no confidence at all (49 percent) that the President will do the right thing with the debt limit. 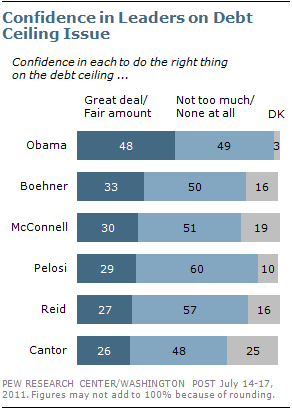 Once again, however, Obama fares far better than the most senior Congressional leaders. Each currently wins the confidence of fewer than a third of Americans, although when the Pew Research survey asked about specific individuals rather than the parties as a whole, the results showed more parity than the CBS News poll's. If anything, the Republicans, House Speaker John Boehner (33 percent of respondents said they had a great deal or some confidence in him) and Senate Minority Leader Mitch McConnell (30 percent) scored slightly better than the Democrats, House Minority Leader Nancy Pelosi (29 percent) and Senate Majority Leader, though the differences fall close to or within the survey's margin of error.

Collectively, these data show the challenges facing the leaders of both parties. While President Obama and the Democrats are beginning to rally members of their own party over the potential economic consequences of a default, they have so far made less headway with Republicans and independents. Meanwhile, Republicans face the potential for internal division, as those leaders who favor compromise will face the skepticism of a the Tea Party base that, per the Pew Research data, is overwhelmingly skeptical that default will lead to economic catastrophe.