People with overdue bills have long complained of harassment from debt collectors, from late-night phone calls to frightening in-person visits. Now it appears the industry has found far more troubling strategy: Filing lawsuits against debtors -- often, consumer advocates say, on the theory that they won't ever show up to court to defend themselves.

The consequences are dire when the debtors don't appear in court. A judge can put a lien on someone's home, garnish wages, even freeze bank accounts -- all without a person ever getting a chance to fight their case. And at times, collectors file suit in error. Consumers interviewed for this story described cases where they were never told they were being brought to court, or were sued for debts on credit cards they never had.

"Over the years we've heard from thousands of people who've found themselves at the end of one of these default judgments," said Susan Shin, a senior staff attorney at the New Economy Project, a consumer advocacy group. "And most of the people we talk to haven't received any kind of notice that they were going to be sued." 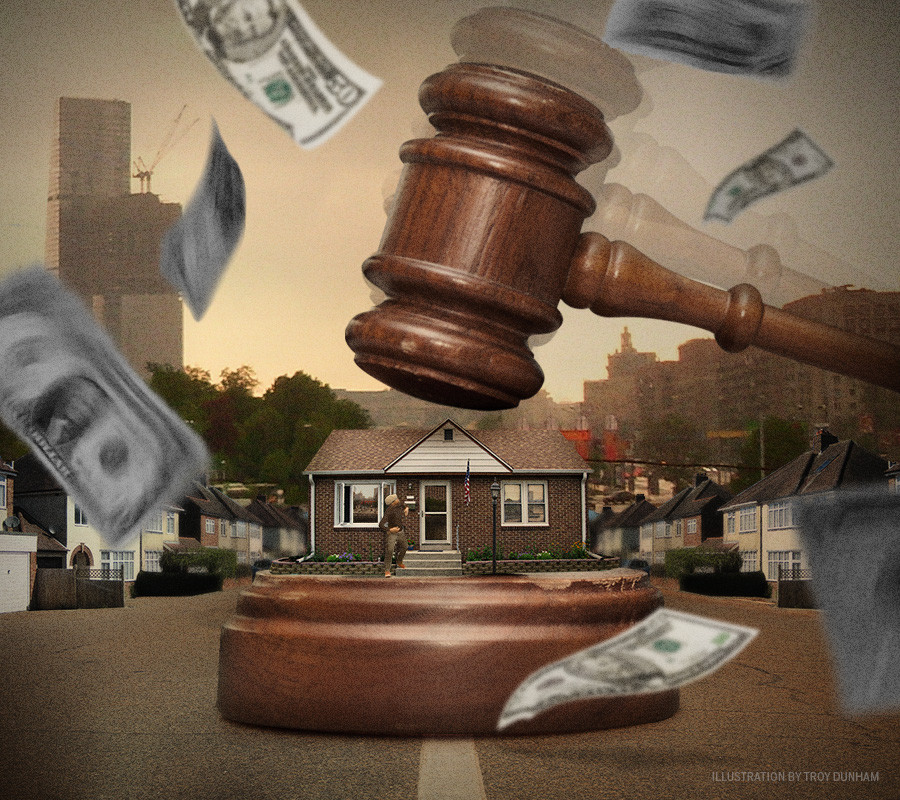 Willie Wilson, a 69-year-old retired veteran from Elgin, Texas, lost his late mother’s home because he never received notice that a debt collector had sued him. Wilson learned when he had the house appraised in 2009 that a collection agency had filed suit against him earlier that year over an unpaid $2,500 MasterCard bill.

Wilson was troubled on two accounts: While normally Wilson would have been "served" a summons to appear in court, he said he never got one. And, he said, he never had a MasterCard.

But since he had been found liable in court, it was too late. He didn't have the $3,500 he now owed. The law in Texas allows a debt collector to force the sale of a home if it's not someone's primary house. Wilson, who inherited the three-bedroom bungalow from his mother, figured he would sell it himself first.

“I really didn’t want to sell it,” Wilson said. “I was gonna fix it up and eventually pass it on to my kids.”

As the debt industry has ballooned over the past decade, collectors' lawsuits against consumers have skyrocketed. A study published last year found there were more than 200,000 cases filed in New York in 2011 alone.

Using litigation to get consumers to pay off old debts has proven a lucrative tool for such firms. For the four debt-buying companies that disclose their earnings to the public, income from legal collections rose from $582 million to more than $1 billion between 2009 and 2012, according to a recent report by the Center for Responsible Lending, a research group that fights predatory lending practices.

Though there is no national data on how often people who are sued by debt collectors show up to court, a Maryland study from 2010 found that collectors often go unchallenged. The study, which looked at thousands of such cases, found that fewer than 2 in 10 borrowers who were served actually responded to their summons.

One of the problems with debt collectors’ appetite for litigation, consumer advocates and attorneys say, is that they may not have all the information they need to prove their claims. As debts get older and are often bought and sold multiple times, crucial information about the borrower gets lost.

“It’s almost like a game of telephone,” said Leslie Parrish, who co-authored the recent Center for Responsible Lending report. "The risk to the consumer is compounded as the debt moves down the chain."

Howard Grodman, a judge in Flagstaff, Arizona, who handles hundreds of credit card debt cases a year, said there are times when collectors will sue without being able to prove the debts they're suing over are valid. "And when the defendant doesn't answer, it's really hard to look into it fully and fairly," he said.

Look: According to a 2013 study by the Federal Trade Commission, only 6 percent of all accounts bought by debt collectors contain documentation like account statements and the terms and conditions of credit. Lack of documentation raises concern over whether some debts are valid. (Image credit: Center for Responsible Lending) 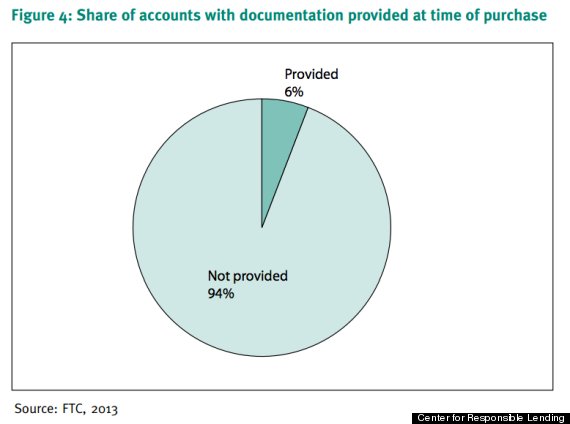 But even when collectors come to court with insufficient or inaccurate documentation, consumer lawyers say, overwhelmed judges aren't always able to thoroughly scrutinize the claims.

“Especially in the big cities, judges don’t have that time to read through two or three inches of documents, or even flip through them,” said Amy Kleinpeter, Wilson's attorney. Doing so “would stop the court,” Kleinpeter said.

In Buffalo, New York, Ebony Brown, 44, said she got a letter from the county sheriff in April notifying her that her wages were going to be garnished. The letter, Brown said, stated that a judge had issued a default judgment against her in 2006 for a $10,000 Chase credit card debt.

Brown said the sheriff's letter was the first she’d heard of the lawsuit. She believes the debt collector must have gotten the wrong person: She said she’s never had a Chase credit card, and that the collection agency’s paperwork had her middle name and the last four digits of her social security number wrong.

Last month, Brown sued the collection agency and won. As a result, the judgment against her was vacated.

The FTC has said that it receives more consumer complaints about debt collectors and debt buyers than for any other single industry. Although a federal law called the Fair Debt Collection Practices Act already outlaws some kinds of abusive and deceptive debt collection practices, further regulation is currently being drafted by the Consumer Financial Protection Bureau, a government watchdog agency.

Debt collectors say they are performing a valuable public service. If consumers were allowed to default on payments without repercussion, more would do so, and borrowing costs for everyone else would go up, they say.

Moreover, they claim, it is sometimes necessary to turn to the courts to collect on outstanding debts, when all other methods of collection have failed.

"The ability to use the courts is a right that all Americans have," said Mark Schiffman, spokesman for ACA International, a trade association for the debt collection industry. But, he added, "It's not the option of first resort because it costs money to litigate these cases."

Jan Stieger, executive director of DBA International, a trade association representing about 350 debt-buying companies, said consumer groups may be exaggerating how often court cases result in default judgments. She also said that it is up to consumers to keep creditors informed if they move.

“Consumers, as you know, in their contracts are supposed to keep their creditor up to date on what their current address is, so that they're reachable,” she said.

But consumer advocates say it can be difficult for many borrowers to even know who owns their debt, or to get in touch with those agencies if they can figure it out. An operator reached by phone at Main Street Acquisition Corp., the debt buyer that owned Wilson's debt, told The Huffington Post there was no one there authorized to speak to the press. A person reached at the number for Hull & Associates, the Houston-based collection firm hired by Main Street Acquisition Corp. to recover Wilson's debt, told HuffPost the firm no longer exists and was purchased by Couch, Conville & Blitt, a law firm that focuses on debt collection. Couch, Conville & Blitt partner Bradley Chauvin said federal law prevented the firm from discussing Wilson's case with the press.

For Wilson, the fight still isn't over. After asking Hull & Associates, the collector that sued him, to investigate, Wilson said the company came back and said they were actually suing over debt from an account at Best Buy -- which Wilson admits he did owe. But, he added, his credit report still lists his debt as delinquent, even though the collection agency said it was paid off years ago. Kleinpeter, Wilson's attorney, is currently helping him remove the charges from the report.

"It felt terrible the way everything went down," Wilson said. "For them to force me to sell my property like that, I felt it really was an injustice."

To compile its report, the Center for Responsible Lending surveyed previous studies of debt collection, analyzed the annual reports of publicly traded debt buyers and scrutinized data collected by the FTC and the Consumer Financial Protection Bureau.