WASHINGTON -- The first set of instant reaction polls on the debt deal announced by President Obama Sunday night show net opposition to the agreement. Respondents are especially concerned by the lack of tax increases for wealthy Americans and show an overwhelmingly negative reaction to the performance of elected officials in Washington. The results also include a reality check: Most respondents say they are not familiar with the specifics of the debt agreement.

An overnight poll conducted by CNN and ORC International finds more Americans disapprove (52 percent) than approve (44 percent) of what the pollsters described as "an agreement between Barack Obama and the Republicans and Democrats in Congress [that] would raise the federal government's debt ceiling through the year 2013 and make major cuts in government spending over the next few years."

The poll delved deeper into specific aspects of the agreement and found support for spending cuts but opposition to the lack of tax increases for wealthy Americans. Specifically,

The survey also included an unusual question that dramatizes the way Americans feel about the overall debate. More than three out of four respondents said elected officials in Washington that have dealt with the debt ceiling debate have behaved "mostly like spoiled children" (77 percent) rather than "responsible adults" (17 percent).

Three automated, recorded voice surveys conducted Monday by the firm SurveyUSA for televisions stations in California and the New York City and Tampa/St. Petersburg media markets provide a look at the public's engagement with the debt debate. The surveys first asked adult respondents whether they were familiar with the terms of the budget deal between Congress and the White House, and then asked "based on what you know, is this a good deal ... or a bad deal?" 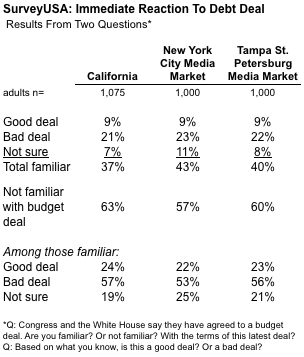 The CNN survey asked for approval ratings at the beginning of the survey, before the questions that probed specific aspects of the debt agreement. It finds President Obama's job approval rating at 45 percent unchanged from the most recent CNN survey conducted two weeks ago. That rating does represent a drop of 10 percentage points since January.

The approval ratings for Congress on the survey hit a new low of just 14 percent, a 12-point fall since January, when 26 percent approved the way Congress handles its job.

Instant reaction overnight polls pose a huge challenge for pollsters, who typically need to call sampled households multiple times over more than one night in order to obtain a representative sample. However, many pollsters are willing to compromise those procedures for breaking news stories.

Given the quick turnaround and the lack of familiarity with the specifics, opinions on the deal may change or appear different on surveys conducted in the next few weeks based on more rigorous samplings of the American public.