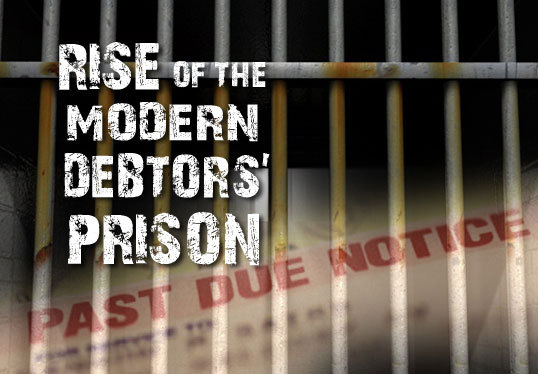 Even though the U.S. Supreme Court has said it is unconstitutional, Louisiana still puts hundreds of people in prison every year just because they are too poor to pay court-ordered fines, court costs and costs of probation, according to a recent investigative report by the Louisiana chapter of the American Civil Liberties Union.

This misuse of the criminal legal system, often called "pay or stay" is flatly illegal. As The Marshall Project reported, the U.S. Congress outlawed the use of debtors' prisons -- jails for people too poor to pay off their debts -- under federal law nearly 200 years ago in 1833. The U.S. Supreme Court followed suit in 1983.

But in a survey of six weeks of court records from last year, the ACLU found that hundreds of people in Louisiana were given pay-or-stay sentences and well over a hundred people were jailed for unpaid fines or court costs. If this many people were wrongly sentenced and jailed in just six weeks, that means thousands have been illegally jailed annually.

The report tells the story of Dianne Jones, a grandmother of three, who was arrested in New Orleans for possession of marijuana. She was given the choice of six months' probation and paying $834 in fines and costs, at a rate of $150 per month, or spending every weekend in jail for six months. She protested that she did not earn enough to pay off $150 a month. Ultimately she had to accept the payment plan anyway because she was helping care for her grandchildren on the weekends so her daughter could work. Unable to pay off the last $148 of her $834 because of unanticipated moving costs, she was arrested and jailed under a $20,000 bond. She stayed in jail until a community group took up a collection to pay off the remaining $148.

The U.S. Supreme Court, in the case of Bearden v. Georgia, ruled in 1983 that courts can not put people in jail when they are too poor to pay fines. Certainly if people have the money to pay and just refuse to pay, the law allows them to be jailed after a court determination that they had the ability to pay and their refusal was willful. But no one should be sent to jail if the reason they cannot pay off a fine is because they earn too little to cover it. The Court restated its promise, mostly not kept, that "there can be no equal justice where the kind of a trial a man gets depends on the amount of money he has."

There are alternatives. For example, Montgomery, Ala., recently made significant changes as a result of a federal court challenge to similar practices in a case filed by the Southern Poverty Law Center and Equal Justice Under Law. Before imposing court costs and fines, Montgomery courts now make individual determinations to see if people earn less than federal poverty guidelines. Low-income people are now allowed to pay off traffic tickets, court costs or fines at affordable rates -- $25 a month, for example -- or the courts waive the fees entirely and order them to perform community service.

These alternatives are increasingly important as courts impose more and more fees and costs on people.

A recent National Public Radio investigation found that most states charge defendants in traffic and criminal court for the services of a public defender, for costs of parole and probation and for electronic monitoring, in addition to court-ordered fines. This means lots more people are going to jail for minor offenses like failure to pay fees and costs.

The ACLU report indicates that every day some poor person in Louisiana is going to jail because they're poor.

That must change. When the only reason you are in jail is because you are poor, that is not legal and that is not just. No one should accept a system that allows courts to effectively order jail for the poor and payment for the rich.