For years, Ann Minch of Red Bluff, Calif., has carried a balance of several thousand dollars on her Bank of America credit card, making minimum monthly payments of about $130, sometimes paying an extra $50 or $100. She says she's never missed a payment.

Bank of America rewarded her loyalty this year by repeatedly raising her interest rate, which reached 30 percent in July.

Fed up, the 46-year-old stepmother of two turned to YouTube.

"There comes a time when a person must be willing to sacrifice in order to take a stand for what's right," said Minch in a Sept. 8 webcam video. "Now, this is one of those times, and if I'm successful this will be the proverbial first shot fired in an American debtors' revolution against the usury and plunder perpetrated by the banking elite, the Federal Reserve and the federal government."

Minch announced that she'd be dumping Bank of America, refusing to pay off her credit card debt unless she was offered a lower rate. She explained that she'd been a reliable customer even though she'd lost her job as a mental health case manager. She said bank reps refused to negotiate her interest rate when she called them to complain a few weeks ago.

"You are evil, thieving bastards," she said in her video. "Stick that in your bailout pipe and smoke it."

The video made a splash online, getting links from all kinds of venues and garnering over 96,000 views as of Monday morning.

Minch told the Huffington Post she fulfilled part of her threat on Saturday, when she went to her local BofA branch and closed out her checking and savings accounts. She took her money (around $5,000, she said) and put in a local community bank. She brought printouts of web pages that had linked to her video, but a manager wasn't interested in looking at them.

"No, we're just going to let corporate handle it. In fact, I don't really even need to talk to you," she said she was told. Bank of America declined to comment when contacted by the Huffington Post.

"Historically, powerful and arrogant corporations, often protected by lazy regulators, have ignored consumer complaints -- now social media tools are leveling the playing field for victimized consumers," Mierzwinski wrote in an email to the Huffington Post. "The old web 1.0 mybanksucks.com sites that no one found are being replaced with realtime viral outrage that will require big business to start treating consumers more fairly or pay the price."

The credit card industry made a villain of itself this year by benefiting from billions in taxpayer bailout dollars and then thanking taxpayers by raising interest rates and minimum monthly payments, even on their good customers.

Minch said she hadn't been paying much attention to her account -- she didn't even notice when her interest rate went from 12.99 percent to 25.49 percent in January -- but that the more she read about the $700 billion bank bailout, the angrier she got. Still, the decision to stage her one-woman revolt wasn't easy.

"When I finally made my decision about what I needed to do, it was scary," she said. "I knew I was probably going to ruin my credit."

Indeed. But Bank of America will be out $5,943.34. Minch shared some of her statements with the Huffington Post. Here's part of a screen grab of her credit card account: 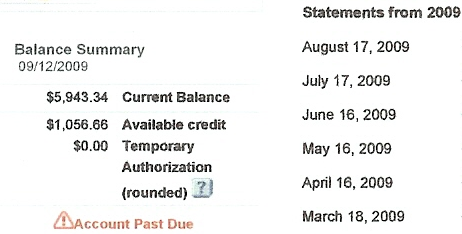 Minch sent Bank of America CEO Ken Lewis a letter demanding that he watch her video and get in touch.

"If you would like to collect payment for this account, it will be necessary for you to view my video and then contact me with your response," she wrote. "The video will take less than 5 minutes of your time, which I know must be extremely valuable because of the gargantuan amount of money you are paid."

Minch said that regular folks will continue getting "bent over" by the government and the global financial industry unless consumers take a stand.

"Tea parties and letters to representatives hasn't done squat," she said. "We need to form a cyber revolution."

HuffPost readers: Anyone else doing this? Is this revolt thing really gonna happen? Let us know if you're jumping on the bandwagon, and we'll post your video. Email arthur@huffingtonpost.com.