It's not true. Doesn't anybody fact check any more?

The Federal Reserve Bank of New York, then led by Timothy Geithner, told American International Group Inc. to withhold details from the public about the bailed-out insurer's payments to banks during the depths of the financial crisis, e-mails between the company and its regulator show.

AIG said in a draft of a regulatory filing that the insurer paid banks, which included Goldman Sachs Group Inc. and Societe Generale SA, 100 cents on the dollar for credit-default swaps they bought from the firm. The New York Fed crossed out the reference, according to the e-mails, and AIG excluded the language when the filing was made public on Dec. 24, 2008. The e-mails were obtained by Representative Darrell Issa, ranking member of the House Oversight and Government Reform Committee.

Most commentators describe the AIG bailout like blind men describing an elephant. Here's what actually happened:

November 8, 2008: The New York Fed agrees to fund $27.1 billion, on top of the cash collateral previously paid out, in exchange for termination of the credit default swaps and acquisition of the entire $62.1 billion CDO portfolio. In other words, the net benefit to the banks is $27.1 billion, and the net value obtained in exchange is whatever cash flows those CDOs would eventually recover. The deals closed over the subsequent six weeks.

December 24, 2008: AIG's SEC filing says that it has acquired the final $16 billion of the CDOs, for $6.2 billion in cash and for the release of $8.7 billion in cash collateral (plus a $0.1 billion rounding error). People who understand CDOs and AIG can also do simple arithmetic, so they see that the banks were paid $16 billion for $16 billion in CDOs, or 100 cents on the dollar. This SEC filing includes an amendment to a previously disclosed agreement which makes clear that $62.1 billion in CDOs has been acquired. At this point, the $62.1 cash payment for CDOs with a face amount of $62.1 billion has been fully disclosed.

Again, the people who follow financial institutions like AIG read this stuff very carefully, and they can do simple arithmetic. You might argue that that AIG's disclosure the 100-cents-on-the-dollar payout was not so obvious to the man on the street. But a claim that the New York Fed directed AIG to conceal the information is as false as saying 2 + 2 = 5.

Geither's name shows up nowhere on the notorious e-mail correspondence. If anyone were interested in understanding the full story of the e-mails, he would first ask questions of the people who wrote the e-mails. But people like Darrell Issa are not interested in getting at the truth, only in shaping the media narrative.

Here was the payout to the banks: 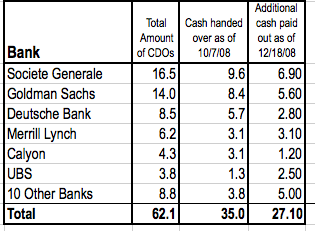 The language in the SEC filings is set forth below: