The so-called "Bradley Effect" is named after Tom Bradley, who lost his bid to become America's first black governor in 1982. The theory is that voters in California purposely misrepresented themselves and their biases against Bradley, an African American, leading to inaccurate poll results.

Of course, with Barack Obama so close to becoming our first black President, analysts and pundits are resurrecting talk of the Bradley Effect as if it were a matter of science, when it may actually be pseudoscience. Are we digging deeply enough to find the truth?

Dan Walters, political columnist for the Sacramento Bee, was at the center of the storm 26 years ago. He covered California's gubernatorial race and provides unique perspectives on why he strongly believes the "Bradley Effect" is a political myth.

Read part of the NOW on PBS exclusive interview with Walters here:

NOW: As someone who covered California's 1982 gubernatorial election, do you believe the so-called Bradley Effect is a myth or a true phenomenon? 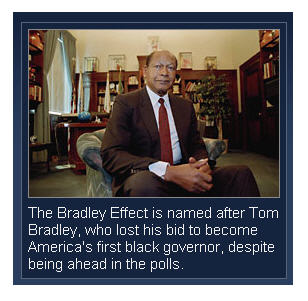 NOW: But what about polls before the election that showed Tom Bradley winning?

"Bradley was so confident that he had won he actually stopped campaigning about ten days before the election."Ahead of the election, the polling showed that Tom Bradley, the mayor of Los Angeles, had a modest, not overwhelming, lead in the election, something like 5 or 6 percentage points. The polling that was being done at that time was based on an understandable assumption that all of the votes would be cast on Election Day. Based on the polling, Bradley's campaign was convinced that they had already won the election. So much so that Team Bradley were literally dividing up office space in the governor's suite, and figuring out who would get what job in Bradley's new administration.

NOW: So what happened?

Bradley was so confident that he had won he actually stopped campaigning about ten days before the election. It was so widely believed that he was going to win that many in the California news media stopped traveling with his campaign. Reporters were even writing up their articles in advance on how Bradley won and the historic nature of having America's first black governor.

While Bradley stopped campaigning, his opponent, Republican Attorney General George Deukmejian, kept on going. Before the election, I was traveling with Deukmejian and his campaign. On the Saturday before the election, his team showed me some private polling data, which indicated that Deukmejian was within three or four points of Bradley, which is more or less the margin of error in most polling. In fact, V. Lance Tarrance, Jr., who was Deukmejian's pollster, recently wrote an article debunking the Bradley Effect, citing the daily tracking polls he was conducting--the data that Deukmejian's staff shared with me a few days before the election--indicating that the race was narrowing.

NOW: So they thought there was a chance they could win?

"In California political circles it is well known that the Bradley Effect was dreamed up after the fact to explain away polling and campaign strategy errors."Based on that polling, Deukmejian's campaign believed they had a real chance of winning. And one reason was because of the absentee vote. A few years earlier, the legislature had liberalized voting rules, making it much easier to vote absentee, thinking it would help the Democrats. But the Republicans saw this and decided to use it to their advantage. They had lists of people who were gun owners and other conservatives and organized a vote-by-mail turnout campaign to mobilize them to vote against a gun control measure also on the ballot and vote for Deukmejian at the same time, believing that the mailed ballots could be decisive in an otherwise close election.

NOW: What happened on election night?

Read the rest of this interview...