What historical figures are held in higher esteem or given more credit for their accomplishments than they deserve?: originally appeared on Quora: The best answer to any question. Ask a question, get a great answer. Learn from experts and access insider knowledge. You can follow Quora on Twitter, Facebook, and Google+. 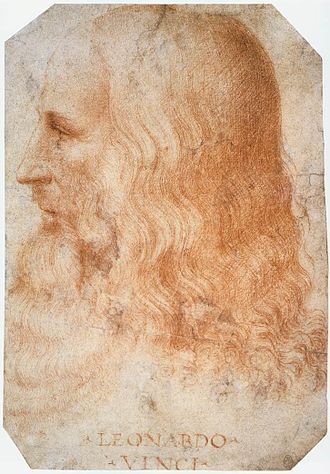 While there is no doubt that Leonardo (he is not referred to as "Da Vinci" despite what a certain stupid novel may say) was a remarkable artist, he is often credited with influence and significance in other fields that he simply did not have. We can regularly read that he was a "scientist" and that he devised inventions that "changed the world". We can read claims that his anatomical drawings were "highly influential" and that "by combining anatomical studies with his art (he) helped to invent modern anatomy studies". We are also regularly told that he was "a man before his time" and that he "was the first person to design a flying machine, centuries before the Wright Brothers".

These statements are substantially nonsense.

Strictly speaking, it is anachronistic to refer to anyone as a "scientist" before 1834, which is when the modern conception of a scientist had develped to the point where someone, William Whewell to be precise, felt the need to propose a new word to describe these people. Prior to Leonardo's time there were certainly natural philosophers who we sometimes refer to as early "scientists" who practiced a form of proto-scientific analysis of the real world via observation, induction and rational analysis. By the later Middle Ages this process was becoming more precise, and used mathematics as a language for the analysis and measurement of the physical world for the first time as well as beginning to lay the foundations of empiricism. By the Seventeenth Century this had developed to the point where actual science in the modern sense was beginning to be practised, though not with the full rigor of later periods.

So, in a sense, there were "scientists" in Leonardo's time. The problem is, he wasn't one of them. Leonardo did not take part in the discussions of his day on physics, optics, mechanics or astronomy mainly because, as an artisan, he did not have the education to do so. He had no training in mathematics and none of the education in logic and inductive reasoning that lay behind these proto-scientific conversations. As a result, he was not part of them at all.

When most people talk about him being a "scientist" they are thinking of his engineering and, more often, of his sketches of some highly speculative machines. In the modern world, "science" and "technology" are intimately linked, with one usually leading directly to the other in most cases. Or technology aids the pursuit of science. But this link did not exist in Leonardo's time.

He was regarded as an artisan, though a highly skilled and creative one. As such he could be commissioned to paint a portrait in oils, create an equestrian statue cast in bronze, produce a fresco, design a siege engine or drain a swamp. These are the kinds and variety of things that artisans had been expected to do throughout the Middle Ages and Leonardo was very much a part of that tradition. He wasn't even an "artist" in the modern (mainly Nineteenth Century) romantic sense. He was an artisan who could turn his hands to a range of practical creative projects as patrons required. But he was not a "scientist". 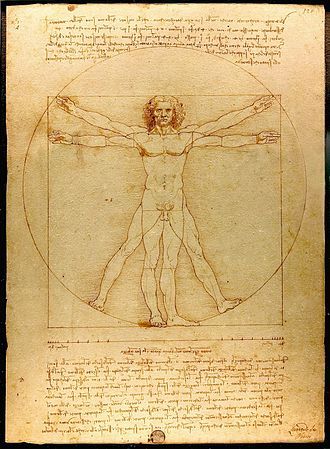 Leonardo's beautifully detailed and complicated anatomical drawings are well known to the point where they are iconic images. This has led to the idea that he revolutionized anatomy, was the first to produce such images and was a highly influential anatomist. These are all myths. Leonardo's drawings had zero influence on anatomy, because they were not published until centuries after his death. Like most of his sketches and notebook material, none of his anatomical drawings saw the light of day until they were reproduced in print in the Nineteenth Century -- they were unknown in his time.

The uniqueness of his drawings is also regularly overstated. Human dissection for the study of anatomy had been revived in the later Middle Ages, after centuries of neglect due to Greco-Roman taboos about corpses stifled such study in the ancient world. Anatomical drawings based on dissections first appear in the Fourteenth Century and increased in skill and sophistication from that point. As artists became increasingly interested in anatomical realism, the study of these drawings and the use of dissections to understand musculature and how the body is made up became part of the study of a young painter, and Leonardo would have learned this from his master Verrocchio. But like all artists of his time who used anatomy, he and his master were drawing on and working within an established tradition of anatomical drawing -- Leonardo did not invent it.

If anyone can be credited with revolutionising anatomical drawing in this period, it's Jan van Calcar, the artist who produced the superbly detailed woodcuts that accompanied Andreas Vesalius' De humani corporis (1543). While not as fine artistically as Leonardo's, they were far more accurate anatomically and, unlike Leonardo's private sketches, were widely published and highly influential on all the anatomical studies that came later.

The idea that Leonardo was a genius who was centuries before his time and invented things that changed the world forever as part of the glorious Renaissance is the standard story that is taught to school children. Leonardo was certainly highly creative and did come up with a few theoretical designs that show a highly inventive intellect at work. Unfortunately, few of them were more than sketches, or even idle doodles, and almost none of them saw the light of day. Far from being influential they, like his anatomical drawings, lay unknown in archives until the Nineteenth Century. 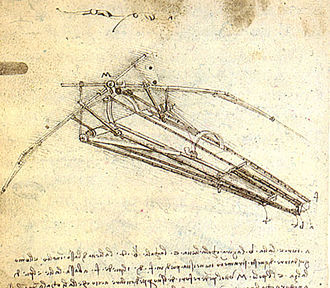 He is credited with inventing things that were "centuries before their time" and being the first to conceive of such "modern" ideas as the parachute, the helicopter and a flying machine. None of these claims are true. Sketches from a century before Leonardo's birth show people were already familiar with the concept of a parachute - at least enough to draw an impractical-looking one in use. The helicopter-like machine he sketched would never have worked, but the concept of rotating blades providing lift was already well-known enough for the it to be the basis for a late Medieval children's toy where a string-pulled rotor could be made to fly from a hand-held stick. And far from being Leonardo's innovation, people had not only been thinking or even designing flying machines long before Leonardo, but they had actually done what he never did: built and flew them. Ailmer of Malmsbury, a Medieval Benedictine monk, built and flew a working glider in the mid-Eleventh Century - centuries before Leonardo was even born.

Leonardo, as a highly skilled and creative artisan in a long tradition of artist-engineers, produced some beautiful paintings and displayed a vast curiosity about the world through his sketches and his tinkering with ideas. But his status as a "scientist, anatomist and inventor" who was centuries ahead of his time is wildly overstated and is largely due to common misunderstandings about what these titles mean and a general ignorance about his historical context and the Medieval traditions and precursors who came before him.