Can a venomous snake really inflict a lethal bite even after its head has been chopped off? That question has been in the air since late August, when reports surfaced of a chef in China who died after being bitten by a decapitated snake.

According to an Aug. 22 report by the Daily Mirror, the chef had been preparing snake soup when he was bitten by the severed head of an Indochinese spitting cobra. The snake reportedly had been decapitated some 20 minutes before the bite occurred. The chef died before emergency workers could get to him, the Mirror reported. 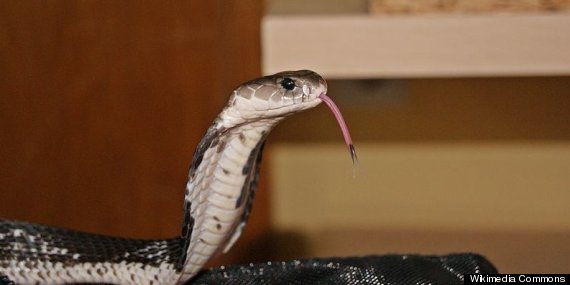 Though it sounds almost impossible that such a thing could happen, the phenomenon is "entirely possible and does happen," Dr. Matthew Lewin, director of California Academy of Sciences' Center for Exploration and Travel Health and an expert on venomous snakebites, told The Huffington Post in an email.

"The snake's venom apparatus and jaw muscles are all contained in the head -- as are the nerves that control these muscles and venomous glands," Lewin said. "Unlike humans, snake tissue can withstand long periods without circulating blood… The tissue doesn't lose function as quickly as a mammal and the reflexes remain intact" even after death.

"It's a bit creepy to me because it blurs the meaning of being dead," he added. "People are susceptible to these reflexive bites probably because they are thinking of beheading from a human perspective."

Similar questions about the biting ability of dead serpents arose last year, when a video of a decapitated snake biting its own tail went viral. At the time, James Murphy, curator of the Reptile Discovery Center at the National Zoo in Washington, D.C., told National Geographic that snakes absolutely "have the capability of causing biting and injecting venom even after the head has been severed."

Something to keep in mind next time you encounter a snake -- even a dead one.