Imagine this: After a long, productive day you go to bed knowing that not one of our neighbors anywhere on the planet is going to bed hungry. The planet's ecosystems - on which our prosperity is based - are healthy, resilient and unpolluted. The injustices of the past that were rooted in intolerance and a lack of respect for and appreciation of diversity have been largely eliminated. You are heading for bed in a world in which justice is the norm for all, not just for the well off. Sound good? Perhaps utopian or even naïve? Still, even though we have yet to achieve anything like it, who wouldn't want to go to bed in such a world? That is the kind of world we can reach if we actually achieve the Sustainable Development Goals. We can imagine it and we must aspire to create it, however difficult it may be. 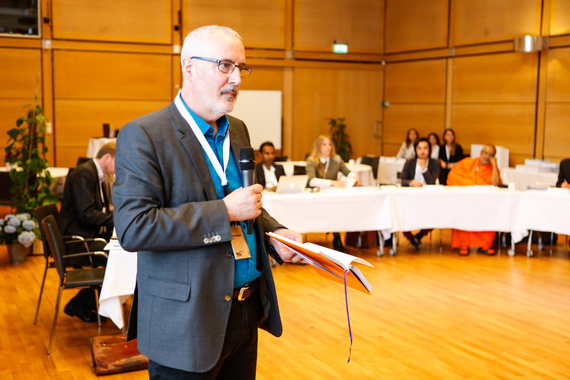 Professor Kevin Noone addresses a sustainability roundtable at the DNV GL headquarters near Oslo, Norway.

Getting from our current world to a better one will require a very long series of decisions. Some argue the earth has now entered the "anthropocene" epoch; named for the significant impact human activity is having on the earth's ecosystems and geology. Some of these decisions will be very difficult, and will require the ability to reconcile complex and perplexing trade-offs. Decisions will need to be made in conditions of uncertainty, and among constituencies with different viewpoints and values. Difficult decisions of this kind need to be based on the best available evidence, not on hearsay or falsehoods.

How do we separate fact from fantasy, opinion from evidence? Logic, and the scientific approach that grew from it are probably the most effective tools we've developed so far to help keep us honest when confronting a complex, confusing world. Science has a very long history and a proud tradition. Since the time of Thales of Miletos in 600 BCE, logic and the scientific method have been continuously developed and refined. The essence of science is to challenge beliefs, and to be willing to change them when the evidence shows them to be insufficient or incorrect.

The value of facts and evidence has been sorely challenged of late. Political operatives make statements like "There's no such thing, unfortunately, anymore as facts"**, or that Britons "have had enough of experts"***. "Post-truth" was named word of the year for 2016 by the Oxford Dictionaries. We feel it is imperative that we push back against these notions. Facts do exist, and they are critically important to proper decision making. Truth is something to respect, not something to get past. Making plans or decisions based on false information is dangerous, irresponsible and comes at high societal costs.

The two of us - along with many other colleagues - collaborate to ensure that the latest scientific evidence from the research community is used in DNV GL's strategic planning, business development and daily operations. As a certification body and risk management advisory company, DNV GL can only do its job properly if we base our analyses and advice on the best available scientific evidence. We rely on experts - internal and external - to provide us with this information. Our customer base would erode very quickly if we based our work on wishful thinking or unsubstantiated opinion. False news and information are not useful for proper planning.

From the research community point of view, it is critical that we continue to develop and expand our ability to provide unbiased, verifiable information to decision makers, but work to do it in a way that is more conducive to decision support. Scientific information is almost never black or white; shades of gray are the norm. Even though we do not know exactly how agricultural systems will react to changing temperatures and precipitation, exactly how ocean ecosystems will react to further acidification, or exactly how Arctic communities will be impacted by the loss of sea ice, we do know enough to prepare solid strategies for the future. Science can inform those plans, but making and implementing them requires contributions from myriad stakeholders. No single group, government or individual has the expertise or the resources to do this alone.

In this sense, collaboration between the private sector and the research community is crucial. In our experience this collaboration can work very well. At the core of successful strategic planning is the trust that everyone involved in the collaboration is honest, that there is mutual respect for others' expertise, and that we operate on fact, not fiction. Strategic planning with a post-truth approach is an oxymoron.

A singular challenge with decision making in the Anthropocene is that many of the most important challenges we face are "wicked" problems. They are ones in which we operate with rapidly changing, incomplete or even contradictory information with a large number of stakeholders and with connections to many other problems. However complex and convoluted these problems may be, they are still characterized by facts. They can be understood through careful observation and analysis. They are only tractable if we have the courage to listen to what the evidence and facts are telling us and to act based on this knowledge.

We reject the notions that experts are irrelevant and that facts don't exist anymore. We will continue to collaborate towards a world outlined by the Sustainable Development Goals based on values of honesty, respect and truth.

*Statement made by Scottie Nell Hughes on the National Public Radio "The Diane Rehm Show" on December 1st 2016, reported in the Huffington Post.
**Michael Gove, UK's justice secretary, in an interview with Faisal Islam of Sky News on June 3, 2016.