Former President George W. Bush is back in the spotlight as he hits the media circuit to promote his new memoir Decision Points in conjunction with its release this week.

"I have written a book," said the Republican leader at a trade conference in Chicago, Ill. last month. He joked, "This will come as quite a shock to some. They didn't think I could read, much less write."

Details from Decision Points began to leak in the weeks leading up to its November 9 scheduled release. From reflections on some of the most intense controversies his administration faced, to concerns over former Vice President Dick Cheney coming off to the public as "Darth Vadar," new insights continue to emerge as Bush conducts interviews about the book.

"I have zero desire, just so you know, to be in the limelight," explained the former White House leader last month. "I'm going to emerge then submerge."

In a one-on-one interview with NBC News host Matt Lauer this week, Bush spoke about his legacy.

"I hope I'm judged a success. But I'm gonna be dead, Matt, when they finally figure it out," he explained. "And I'm comfortable knowing that I gave it my all, that I love America and I know it was an honor to serve."

While the time Bush spends in the public eye may be short-lived, there's no shortage in details from Decision Points to keep buzz alive about the former president.

Here's a rundown on some of the most intriguing revelations: 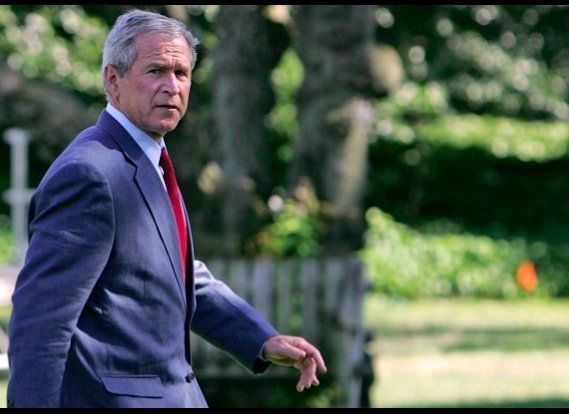 1 / 12
Most Embarrassing Moment From Drinking Days
HuffPost's Sam Stein <a href="https://www.huffpost.com/entry/bush-reveals-his-most-emb_n_779487" target="_hplink">reports</a>: The second batch of former President George W. Bush's interview with NBC's Matt Lauer was released on Friday. And unlike the first, it is heavily focused on the personal turmoil that plagued Bush prior to his political career -- chief among them his excessive drinking. Buried in the interview is a colorful anecdote that personifies to what extent alcohol had come to dominate his life. MATT LAUER: Tell me the story about the dinner party where you-- GEORGE W. BUSH: Okay. So here's one of the worst. MATT LAUER: That's what we want, we want the worst. GEORGE W. BUSH: Well, you found it. MATT LAUER: Yeah. GEORGE W. BUSH: So I'm drunk at the dinner table at Mother and Dad's house in Maine. And my brothers and sister are there, Laura's there. And I'm sitting next to a beautiful woman, friend of Mother and Dad's. And I said to her out loud, "What is sex like after 50?" MATT LAUER: Silence. GEORGE W. BUSH: And I mean total silence. And not only silence, but like serious daggers. MATT LAUER: From your mom. GEORGE W. BUSH: Yeah. And my wife. And then I end the anecdote by saying, "I call her to apologize, of course." The after dinner remorses. MATT LAUER: But the point of the story is to say alcohol had a control of you, you didn't have control over alcohol. GEORGE W. BUSH: That's right. And I was a wiseass, and I would do stupid things, and alcohol had control over me. The interesting thing-- I end the anecdote with her writing me a letter on my 50th birthday, when I was governor of Texas, "Dear Governor: Well, what's the answer?" <a href="https://www.huffpost.com/entry/bush-reveals-his-most-emb_n_779487" target="_hplink">Click here </a>to read more.