The classical elemental forces of nature are air, earth, fire and water. But there are other great environmental powers that have a beating heart, such as when millions of wild animals come together as one to surge across an endless African plain. Such is the Great Migration of wildebeests in Kenya and Tanzania. 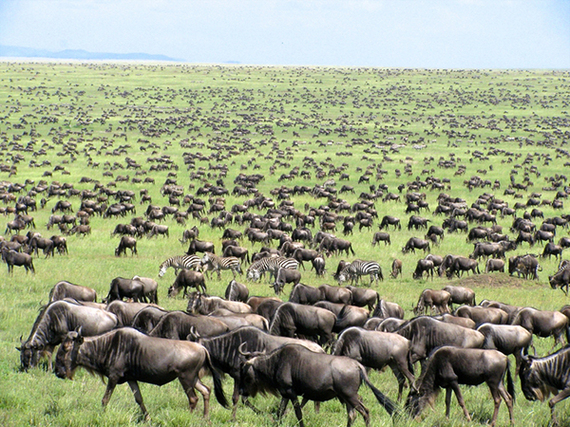 Wildebeests, an Afrikaans term for "wild beasts," are often described as creatures made from other animals' parts: the forequarters from an ox, the hindquarters from an antelope, and the mane and tail from a horse. But such amusing descriptions make light of the hard fact that these animals have been ideally built to stay on the move and that they have been making their annual loop through the African plains and savannas for more than 1.5 million years. Even today, the International Union for Conservation of Nature (IUCN) lists this species as one of least concern.

So, wildebeests have perfected what they are and have demonstrated their staying power. With so many other animals on the brink of extinction, there's no immediate reason for us to be worried about them or other non-threatened species at the present time.

Why keeping keystone species is key 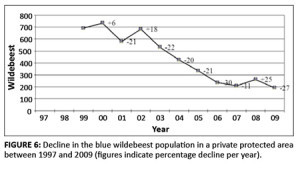 According to the United Nations Environment Programme (UNEP) Global Environmental Alert Service, which continuously scans the scientific literature and analyzes the results of observations of Earth and other data to produce alerts on environmental hot spots and hazards, wildebeests have become much less common in some areas where they were once abundant in southern and eastern Africa. Although the total population of wildebeests numbers over one million, they face an array of threats that plague so many other species today, such as a growing human population. More people are moving into the wildebeests' eastern range, especially, which is reducing and fragmenting the animals' habitat. And as the number of people increases, more food is needed and poaching wildebeests is becoming more common.

In some areas, government programs allow the deliberate killing of wildebeests to try (unsuccessfully) to eradicate livestock diseases. Fences meant to keep livestock and wildlife apart have cut off wildebeest migration routes, preventing herds from reaching water during dry seasons. Wildebeests are the most water-dependent ungulates, and limited access to water during dry and drought periods is believed to be one of the main reasons for the decline of the population.

Still, wildebeests are not endangered. In a time when monies for conservation are so scarce, why spend scant resources on them while other wildlife species are in dire straits and in imminent danger of going extinct? 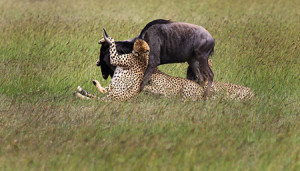 Much like the wolves of Yellowstone, wildebeests are considered a "keystone species." That means that they have a disproportionally large effect on their environment relative to their abundance and when compared to other species of equal biomass found within their community--simply by performing their natural behaviors necessary for survival. Keystone species are crucial in maintaining the integrity of their ecosystems.

In the case of wildebeests, their migratory behaviors and grazing affect many other species. Not only do they serve as prey for large carnivores, especially lions, wildebeests actively create and maintain the open African grassland habitat. In addition to fertilizing the soil and destroying seedling trees by the trampling of their many hooves, wildebeest bulls habitually horn young trees as an expression of aggression, further inhibiting the regeneration of woodland. Thus, large populations of wildebeests on the Serengeti may exert a greater environmental impact than almost any other African mammal.

How this could be our biggest problem 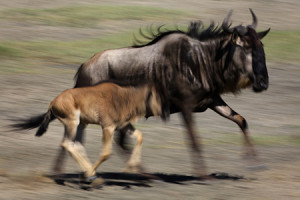 The planet is currently experiencing its sixth mass extinction of life. Since the number of species on Earth is still an approximation, it's difficult to accurately state exactly how many species are becoming extinct. However, according to World Wildlife Fund, scientists believe that population sizes of vertebrate species have declined by 52 percent over the last 40 years due to climate change, habitat loss and resource depletion, among other factors. If we lose keystone species, extinction rates will dramatically increase.

Perhaps like the ICUN's Red List of Endangered Species and Green List of Protected Areas, we need an ICUN Yellow, Blue or Purple List of Keystone Species so that we closely watch and start conserving them. Maybe wildebeests aren't endangered yet. But the slow decrease in their population--much like the greater proportionate impact of keystone species themselves--should cause greater alarm.

Do you think conservation resources and monies should be expended on non-threatened keystone species, when so many other animals are in immediate danger of disappearing from Earth altogether? How do we prioritize?

Here's to finding your true places and natural habitats,

1. The Great Migration of wildebeests in Kenya and Tanzania © Natural Habitat Adventures
2. Chart: Depicts a decline in the blue wildebeest population between 1997 and 2009 in a private protected area. ‬© www.koedoe.co.za
3. Wildebeests serve as prey for large carnivores, such as lions and leopards. © Eric Rock
4. Wildebeests may not be endangered yet, but their loss would cause an impact far greater than the lack of the animals themselves. © Eric Rock