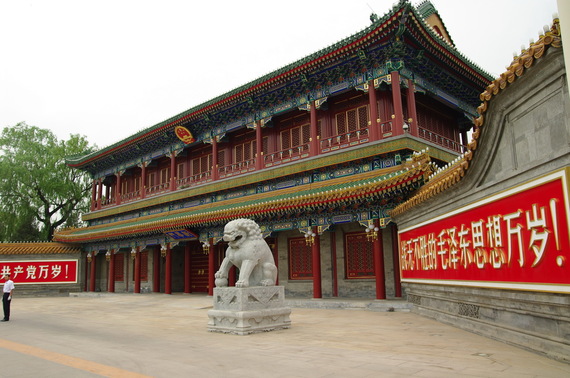 The Party Center has spoken. What is it saying?

On February 25, China's state media began the widespread rollout of President Xi Jinping's new ideological directive, the "Four Comprehensives." With this contribution to the ruling Communist Party's stock of guiding concepts in political philosophy, Xi has passed an important milestone for any new General Secretary.

Entering the pantheon of Mao Zedong Thought, Deng Xiaoping Theory, "the important thought of [Jiang Zemin's] Three Represents", and Hu Jintao's Theory of Scientific Development, Xi has now established his own status as a theoretical, not just political leader. Westerners sometimes forget that Leninist parties have always conceived of themselves as intellectual avant-gardes; they lead and self-organize by means of Marxist 'research' and rhetoric as much as by direct economic and political action.

That being the case, it is important for Western analysts and policy-makers to take seriously Xi's new ideological platform. What does this bold new numerical slogan tell us about China's ongoing political transformations?

First, let's begin by reiterating the contents of the new directive. It calls on Party members to:

It should be noted that, while the term has only just been clearly defined in official media as a "theory" on the same level as those of previous leaders, it had previously appeared on several occasions. Moreover, each of the individual phrases (with or without the adjective "comprehensive") has been separately endorsed in numerous different settings by Xi and other Party leaders.

The first and third "Comprehensives", in particular, have been ideological mainstays for decades. As early as 1979, Deng Xiaoping had already called for achieving a "moderately prosperous society" as one of the motivating goals in pursuing economic reforms. Far from a policy innovation, then, this reappearance of the term should be seen as deliberately invoking the legitimacy of Deng's "Reform and Opening Up" agenda.

"Governing the nation according to law," meanwhile, has also had a long rhetorical career. Especially in the post-Tiananmen 1990s, as the Party sought to reform its police and security forces, major Party leaders and media outlets regularly pushed this concept (albeit often mixing it with paradoxical phrasings such as "governing the nation according to both law and 'virtue'").

Of the remaining two phrases, "deepening reform" is also hardly a wholly original idea. Yet Xi's administration has pushed it in a new and much more pronounced way as compared with his predecessors. In particular, the phrase has already been tied in with Xi's own status as China's second great "Architect of Reform" after Deng Xiaoping. Implicitly, it takes a leader of Deng-like stature to "comprehensively deepen" his reforms.

"Strictly governing the Party," meanwhile, is most strikingly innovative of all. Unlike the others on the list, it is a remarkable departure from previous high-level ideology (though the phrase has been subtly used a few times in recent years). As will be argued below, it may be the key to understanding the whole set.

Though lacking the same commanding authority as will now be enjoyed by the Four Comprehensives, Xi's main political/ideological directives up to now have been his dramatic and apparently permanent anti-corruption campaign, as well as some economic liberalization moves, his promotion of significant rule of law initiatives, his pioneering of new, centralized decision-making apparatuses, and his callback of Mao-inflected Party practices such as self-criticism sessions and the "mass-line campaign."

Many of these recent initiatives can be seen reflected in the new platform. Economic liberalization moves (in particular ongoing efforts to direct a "managed slowdown" in favor of service-sector-led growth patterns) ties in closely with the attempt to establish a middle-class, "moderately prosperous" society.

Rule of law efforts, such as the significant new guidelines announced by the Supreme People's Court in its just-released Five Year Plan of reform, certainly can be seen reflected in the call to "Comprehensively govern the nation according to law." Likewise with the ever-intensifying anti-corruption campaign.

Importantly, economic liberalization, rule of law, and anti-corruption are also key to understanding what Xi means by "deepening reform." The word "deepening" is likely invoked to indicate that various rules and institutional mechanisms that were previously immune to reform (due to the Party's internal operating methods of "hidden rules" [潜规则]) are now being opened up to top-level regulatory control.

Again, though, "strictly governing the Party" must be seen as the outlier among the Comprehensives. While the concept does seemingly tie in with the anti-corruption campaign, as well as the general theme of economic and rule of law reforms (inasmuch as these seek to regulate the powers of lower-level officials), the term nonetheless seems to suggest some additional, less obviously explicable content.

It is this "extra" dimension of "strictly governing the Party" that I suggest ties in with the overall presentation of the four principles taken as a set. The common term "comprehensive" in Chinese is quanmian (全面), literally meaning "the whole plane."

One possible interpretation of the term's new prominence would tie it in with one of the Party's longstanding internal strategies for policy implementation, a principle referred to as "point, line, plane" (点，线，面). As described by Ezra Vogel in his account of Deng Xiaoping and the Transformation of China, reforms that were being mooted for national implementation would first be tested in individual locales, then approaches would be applied more broadly in a "line" of similar spots, and finally, if all went well, would be kicked up to the level of the entire national "plane".

Though generally applied only to highly specific reform initiatives such as the mid-1970s remaking of the Chinese railway administration, the "point, line, plane" model offers a way to understand what Xi might mean by his Four Comprehensives. While, for example, rule of law reforms have until now mostly applied only to a small subset of commercial cases that have seen some improvements in efficiency, reliability, and transparency, it may be possible that these reform goals will now be pushed up (perhaps very gradually) to the level of the entire "plane" of judicial administration.

The last Comprehensive, "strictly governing the Party," suggests that something like this understanding may be correct. While previous ideological initiatives have had no need to emphasize the internal governance of the Party, the concept of ensuring implementation of bold reforms at the level of the national "plane" suggests the need for an increased level of discipline among low and middle-level officials. In order to realize any of the Comprehensives, the last will have to be a target of special focus (quite in line with Xi's many ideological exhortations to grassroots-style simplicity and emulation of the Party's founding generation).

Finally, these developments may give us a new way to understand Xi's use of Mao-style self-criticism sessions, "mass-line campaigns", and other such forms. These are the Party's traditional tools for mobilizing increased disciplinary oversight of its members. Rather than emulating Mao, then, Xi might be seeking to remake his Party into a much more efficient, effective political organization, while restoring a similarly "comprehensive" ability to determine and direct social change. Whether this makes room for a significant degree of judicial independence - or at least predictability and due process - is an open question.