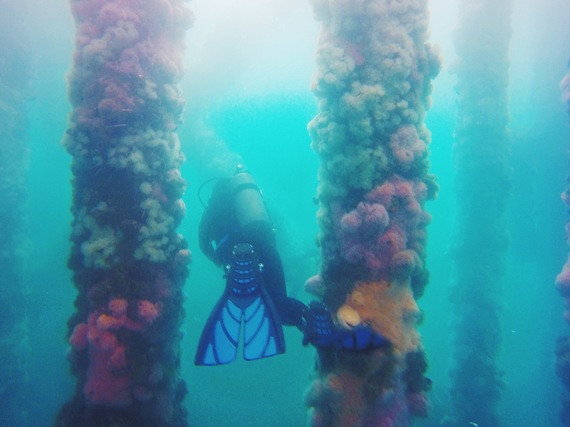 California has entered a new era of outer continental shelf oil and gas activity. The focus has shifted from the development of new oil wells and offshore facilities, to research on decommissioning these facilities as the oil wells dry up and offshore production slows to a halt. One option when decommissioning these structures is the Rigs to Reefs (R2R) program. R2R, in which an oil company chooses to modify a platform so that it can continue to support marine life as an artificial reef, is rapidly becoming an issue of public concern, scientific study and policy debate. Therefore, to gain insight and create a model for implementation, California looks to the Gulf of Mexico.

The Rigs to Reefs program is well established in the Gulf of Mexico, with over 20 years of experience converting decommissioned oil and gas platforms to artificial reefs. To date, over 188 platforms have been converted to artificial reefs in the Gulf. Although an initially impressive figure, it actually only represents approximately eight percent of all decommissioned platforms. The percent converted is low because most obsolete platforms in the Gulf are in shallow water, where the cost of complete removal (with subsequent salvage and scrap sales) is less than the cost of artificial reef conversion.

However, in deeper, federal waters, R2R significantly reduces what an oil company pays when decommissioning an oil platform and absolves the oil company of responsibility for future damages and liability. Seeking to capitalize on potential savings, oil companies with platforms in deeper water have eagerly participated in R2R programs. According to Chevron representative Ayana McIntosh-Lee, it can cost "up to $5 million for oil companies to remove platforms from federal waters." In comparison, it costs only $800,000 to convert the platform into an artificial reef.

The R2R programs established by Texas and Louisiana do not receive state or federal funding. These artificial reef programs are funded by oil and gas company contributions and the subsequent interest that is paid on those donations. Oil companies participating in decommissioning platforms for R2R donate one half of the cost savings to artificial reef programs. In turn, the governmental agency assumes liability for the artificial reef and the fund handles any maintenance. Currently, the Louisiana R2R fund has a balance of $18 million and earns approximately $1 million in interest annually; the Texas fund has at least $4 million.

In our analysis of R2R legislation in California, we assume that a R2R program would function similarly to the model implemented in the Gulf of Mexico. Specifically, we assume that the platform and rig would then be inspected on a case-by-case basis and eligibility would be granted by the appropriate governmental agency and would be subject to review under the National Environmental Policy Act. We also assume that for each rig accepted to the R2R program, the associate oil companies will remove the upper portion of the rig to some depth below the ocean surface, in regulation with the Coast Guard. The oil company would then donate 50 percent of the cost savings to a trust fund for reef maintenance and liability costs.

With these perimeters in place, California's Rigs to Reefs program has the potential to be a viable option when making a decommissioning decision.

To learn more about the Rigs to Reefs program, check out www.rig2reefexploration.org, or follow Rig2Reef Explorers on Instagram @rig2reefexplorers.