For years, Israeli politicians exploited the phrase ein partner (there is no partner) in order to dodge substantive peace negotiations with the Palestinians. These days, Prime Minister Benjamin Netanyahu keeps repeating that it's "a myth that Israeli construction in the West Bank is an obstacle to peace." But as we know, simply repeating something doesn't make it true; reality shows that the settlements are precisely that - a major impediment to peace. 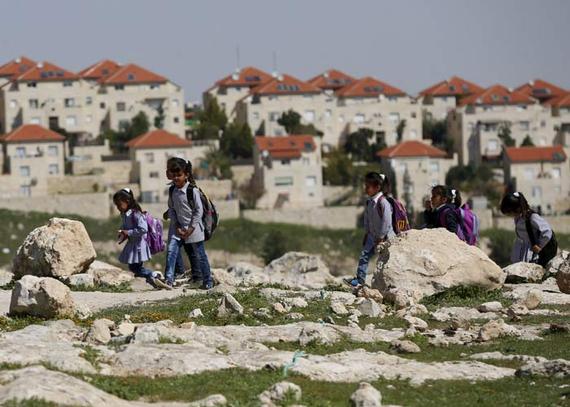 As of 2016, there are over 600,000 Israeli settlers living in the West Bank and East Jerusalem: a number which has more than doubled since the Oslo Peace Accords in 1994. In fact, the Israeli government actively encourages people to move to settlements, providing subsidized housing, transport and water.

The construction of settlements, built on land that was, and continues to be, stolen from the Palestinians, is a breach of international law. Article 49 of the Fourth Geneva Convention prohibits an occupying power from transferring its population into the occupied territory. In spite of this, Israel continues to do exactly this by expanding settlements on a daily basis. How is ongoing land theft and state-sponsored invasion not an obstacle to peace?

In tandem with Israel supporting settlers building their houses on Palestinian land, it is expelling the Palestinians who have been living there for centuries. Israel also prevents Palestinians living in Area C - the 63 percent of the West Bank fully controlled by Israel - from building any houses. According to an OCHA report, Palestinians submitted 2,020 applications for building permits between 2010 and 2014. Of these, Israel approved only 33. At the same time, Israel demolishes the houses, schools and roads of Palestinian communities. This year alone, Netanyahu's government has flattened 660 houses and other structures, leaving almost a thousand people homeless, many of them children. How is this cruel destruction of property and livelihoods not an obstacle to peace?

Israel not only appropriates Palestinians' lands, but also controls their water resources. The result is that Israeli settlers use 370 liters of water daily per person, as a report by Palestinian human rights group Al Haq shows. Meanwhile, Palestinians only get 70 liters of water daily per person, if they get any water at all. This summer, one of the hottest recorded, Israel shut down the water supply of entire towns for over two weeks. As a result, people had to cut down on showers; farmers lost their crops; animals died. How is this inhumane policy not an obstacle to peace?

In addition to being illegal, the settlements also inflict great damage on the environment. Every year, settlers discharge 40 million cubic meters of wastewater into Palestinian valleys and agricultural land, and only 10 percent of this wastewater is treated, according to the Palestinian Bureau of Statistics. Making matters worse, many polluting factories have moved from Israel into the settlements' industrial zones. This is because Israeli oversight over the settlement industries is lax, and as a result, toxic waste often ends up on Palestinian land and in the rivers, contaminating and poisoning the areas for years to come.How is wanton destruction of the environment not an obstacle to peace?

Then there are the constant attacks on Palestinians by violent settlers. They assault Palestinians, burn down their homes, kill their sheep, poison their wells, and destroy their fields. Since January alone, there have been 97 settler attacks against Palestinians and 130 attacks against their property, according to OCHA. Over 11,000 olive and other trees have been uprooted and vandalized. The settlers commit these violent acts knowing they won't be brought to justice for it - less than two percent of all Palestinian complaints against settlers result in a conviction, according to the Israeli human rights group Yesh Din. How is ongoing injustice not an obstacle to peace?

Of course, the settlers couldn't commit these assaults if they weren't protected by Israeli soldiers. Soldiers who will shoot at any Palestinian, but do nothing when adult settlers assault and harass Palestinian children. Soldiers who wave their loaded guns in the faces of 6-year-olds and search their school bags. Soldiers who kill Palestinians and then claim it was a 'mistake', as was the case with 15-year old Mahmoud Rafat Badrani. How is this daily violence not an obstacle to peace?

Netanyahu is well aware of all of this. So why does he keep repeating his myth? Because he wants the world to believe that it's the Palestinians who don't want peace - when it's really Israel that is working, and working relentlessly against it. Day by day, settlement by settlement.