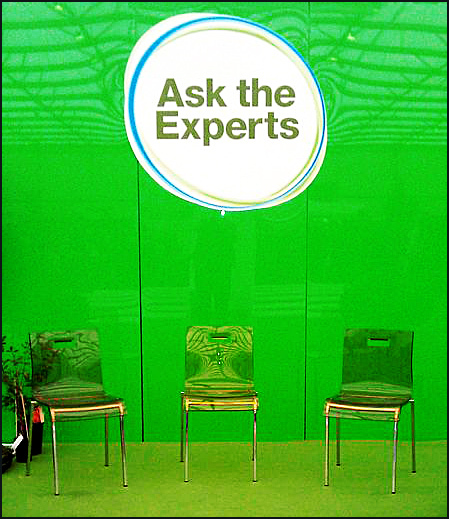 Lots of empty chairs there. Ironic, in an emblematic sort of way. Because we as a society simply brim with experts. In fact, if you've ever been tempted to throw your computer across the room and scream, "SHUT UP" after you've read yet another "expert opinion" of someone, followed by the chattering comments of those who see themselves as further experts commenting on the expertise of the person whose expert opinion they are commenting on, you know why this picture is ironic.

Something slightly ominous happened over the last couple of decades that I was, perhaps, not immediately aware of; strange, since I'm usually up on the tips and tilts of our cultural balance. But this one, in all its crafty and insidious slither, got right by me, at least until more recent years. The phenomenon started back in the '90s with chat rooms and online forums, heated up with the slow burn of comment features under articles and personal blogs, taking its time to come to full, heaving, undulating boil to what we have now: the Expert Delusion.

The Expert Delusion is a sort of societal personality disorder defined as the mistaken and misguided belief that what you are saying goes beyond your opinion to be, in fact, fact, a hard reality, the unequivocal truth. That you are not only a "regular person allowed to speak my mind like anybody else" in a "free country where we all get a say," but you are an expert, one who just... knows stuff (let's not get nit-picky about actual expertise). This delusion is not only infecting media pundits, elected officials, religious leaders and acknowledged academics, it has crept into the DNA of even the most earthbound of folks: the friends, neighbors, online associates; girlfriend, grandpas, co-workers; even that snarky, tech-savvy teenager who lives upstairs. It is a great equalizer, the Expert Delusion.

One need only stand back and look at the discourse that is posted, viewed, and dissected any day of the week to see that this vaunted status that used to take years of education, mentoring, research, exploration, hard work, hands-on experience, and deep, embedded connection with the matter at hand is now simply a matter of finding a computer, getting access, and having the ability to type and/or talk. That's it. That's all it takes to be an expert in the 21st century. Kind of like becoming a licensed minister by paying an online fee (does anyone really feel married after those weddings??).

I'm being glib, certainly, but, really, just scroll through the newsfeed on any media site -- Twitter, Facebook, Tumblr, Reddit, even here at HuffPost -- and you'll see the trend. What has transmogrified from the democratic and inclusive mission statement of comment features, personal blogs, invited contributors, columnists, talk shows and the like, has taken us from, "oh, cool, I get to express my opinion and someone will publish it!" to the perhaps unanticipated, unintended, and profoundly unfortunate (evil?) reality of trolls, snark-baiting commenters, hate-speaking pundits, dogma-wielding politicians, and bloggers/writers who seem to believe that by virtue of their platform they have magical carte blanche as experts, a status they believe is accepted and agreed upon by... well, everyone. Which, of course, it's not. But tell them that.

It ratcheted up during the last election year, when every single bloody human knew exactly what every other bloody human should think, feel, say, and do with their thoughts, words and ballots; when everyday people (and, oddly, some high-profile actors) somehow had the inside scoop on the presidential war room and decisions the administration was making on security matters; when partisan folk on all sides of the aisles were just so damn sure about what was behind the shenanigans of anyone in the news or watching it. Yeah... all that.

But the Expert Delusion extends far beyond politics and partisan bloviating into the everyday world, into the minutia of how we live our lives and traverse the matter of being human. Insinuating itself into every subject, every conversation, every belief system; everything, with the unassailable message that "I (whoever is talking/writing/commenting) am an expert and everything I say is correct. You are a stupid, uninformed idiot who knows nothing."

I'm not just talking about commenting trolls here. I've pretty much covered that. I'm talking about the saner people (one presumes): the writers, the higher-profile bloggers who get tweeted and retweeted; the family and friends who leave perspective on your Facebook threads; strangers who send private emails on whatever topic is being discussed. It's not just a matter of someone saying -- as they have a right to -- "for what it's worth, this is my opinion, take it or leave it." That's tolerable on any level (and certainly I'm quite free with my own opinions!). It's those who assert their opinions with hostility, superiority, and a certain arrogance; who came at you with dismissive assertion, personal condescension, and limited tunnel vision so fierce that rightful opinion is propelled into the realm of the Expert Delusion.

Consider of late: The tragedy of Philip Seymour Hoffman's death, presumably by his own hand at the sway of an indomitable addiction, brought out a staggering number of "experts," people who insist on not just sharing their personal experiences (with attendant opinions), but insist they can define exactly what was going on with a man they did not know and, therefore, could not possibly analyze with any degree of credibility. We had New York Post "expert" Andrea Peyser snarling that "we've been looking at addiction all wrong," happy to set the record straight that Hoffman was damn well not a victim but a rich actor whose rent was "nearly 5¹/₂ times my monthly mortgage payment," who just made a simple "choice" to kill himself. This is asserted with cold dispassion, dismissing any argument of "disease" (a word she rejects "like ebola"), putting her in a camp that believes defining addiction as such somehow removes the involvement of any free will. Black and white thinking; always misguided.

And there were many others. Friends who growled that nobody but an addict could possibly have an intelligent opinion (which would make moot the point and purpose of ALANON), that offering compassion was akin to "enabling"; that the personal experience of one person is a truth that defines all truth. Hoffman's death has incited a clusterf**k of expertise thrown around like so much confetti and, frankly, I think we all need to shut up about who he was, why he died, and how that translates to every one else in the world. At least for a minute. The man was just buried.

And then there's Dylan Farrow, Woody Allen, and the matter of child molestation. Yes. That one appears to have sent out embossed invites to anyone with genitals who believes that by virtue of having them they know what all the parties involved have done with theirs. Whatever one might think about this imbroglio, the heat and hubris of those offering "expert" opinions has been damn near nauseating. Again, it isn't just a matter of someone saying (as I did) that "none of us but the two of them know what happened in that attic, but in reading Dylan Farrow's letter I'd have to say it came off as authentic and resonating." Or, as others believe, that Woody Allen's response rang of truth. No, what we got instead were announcements and declarations that this or that person knew what happened in a private space in which no one else was present; that this or that person was certain Woody was a manipulative child molester or Dylan was an addled pawn of a deranged mother. This, of course, predominately from people who know none of the parties.

But then there was another kind of expert, a guy like Robert Weide who, after doing a documentary on Woody Allen and clearly feeling such simpatico that his Twitter pic is one of him and the Woodster together, felt qualified to come out with a tome on the topic, excoriating those on the other side of the Woody divide as if they were creatures from a horror film... or a film Woody might have made. This kind of expert is, perhaps, most dangerous, as they can claim some connection without proof of any true knowledge of the facts. Weide's assertions (as well as Woody's) have been deconstructed by many (Jessica Winter at Slate, Maureen Orth at Vanity Fair, and others), who share my concern that Weide is not objective enough to be credible and Woody is perhaps not best served by attacking and denigrating the daughter he claims to love and have never molested. But still, that article of Weide's is now part of the narrative and has been quoted and excerpted all over the place as a worthy, expert defense of a maligned auteur. He's an "expert," see?

And they're EVERYWHERE!! They know Hillary's "ruthless," Obama's considering "assassinating another U.S. citizen" (see Twitter click-bait below from Salon), and every single thing in Sochi is horrible, terrible and really bad. Writers not only write these stories but readers comment in agreement, often with hostile, aggressive and contentious declaration, because they're all... experts.

Except, they're not. I am not an expert, none of the writers I've linked to are experts, the commenters screaming at you (and me) about our opinions are not experts; even the people who've had experience with addiction, molestation, abusive fathers, hysterical mothers, horrible politicians, and Russian sporting events are not necessarily experts. At least not in the classic sense. They can be experts about themselves, their experiences. But no one else, no one else's experiences. Which leaves us with our opinions, a very different beast.

The only experts are... the experts. Those who've been in the trenches, gotten the education, done the work, fought in the field, put in the years, accrued the experience. To them I accede the assignation, because they deserve it. If you have done that work, then, OK... we'll call you an expert.

But make note that the real experts are often filled with a level of compassion, understanding and acceptance that those with the Expert Delusion seem to miss. Which is interesting... and something the deluded ones might want to think about the next time they're sharing a snarling diatribe in defense of their "expertise."