In Simon McBurney's brilliant play The Encounter, we are all given a chance to adventure... to suspend our 'normal' sense of reality and immerse ourselves in the robust world he creates on stage, a place beyond time and the limits of our usual existence. 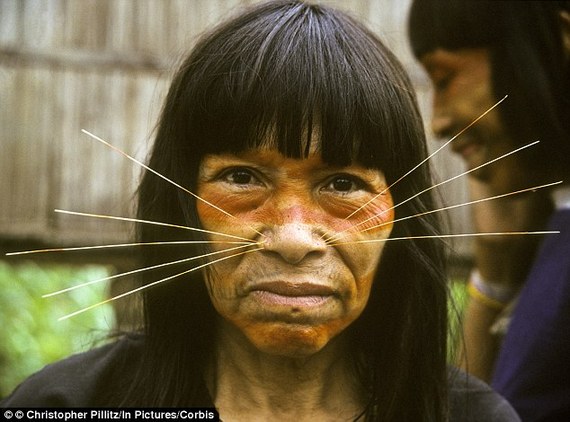 My first experience with McBurney's work was when his Theatre Complicite came to New York with Mnemonic, a play that explored memory through the interconnecting tales of the 5000 year old Ice Man found in the Alps and a woman searching for a father she never knew in Eastern Europe. These two disparate tales braided together in unique and brain-openings ways. Complicite's work is certainly philosophic, but it is also immensely physical and visual. I recall seeing a giant chair morphing itself into the body of Otzi the Ice Man as if it were doing a ballet.

Complicite has the kind of specialness that stays with the viewer, as much for its choice of topics as its execution. In A Disappearing Number, an untutored Indian mathematician moves to Cambridge to share math think with a Professor G.H.Hardy. This true story is devised with theatrical magic, using simple props to create entire worlds. It is also peppered with diverse characters that seem to walk through time -zones and culture.

In The Encounter, Mr. McBurney takes on the story Amazon Beaming by Petru Popescu of Loren McIntyre, a National Geographic photographer who travels to the Amazon to photograph a tribe of people on the brink of extinction. What happens to him there is amazing, but to experience it through his own brain makes it truly a journey. This is accomplished primarily through McBurney's acting chops, but he is aided by technology. We all are listening with the assistance of highly advanced sound techniques and headsets. 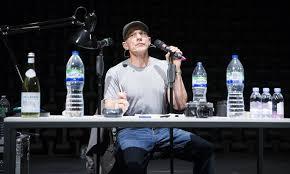 It is ironic...here we are, hooked up to headphones that deliver a cacophony of voices and characters into our hearing receptors, taking us deep into the forest of Brazil and deep into our own imaginations while the subjects of the play, the Mayoruna people are living with nothing more advanced than a spear. Or so we think.

Are they really the simple non-advanced people or are we? They have carried on for ages and despite, encroaching 'civilization', still maintain their cohesiveness and their community. And when Loren, lost in the jungle, unable to speak the native tongue, begins to receive communication from the headman, what are we to think?

There are some theories that humans were telepathic at one point of our evolution; perhaps our level of compassion was greater or there was an understanding that we are all one mind and only modern man believe that we are separated by body, culture, time and space. These realizations that he is actually hearing the headman astound Loren -after all he scientific and trained to think that hearing voices inside one's head is more a sign of illness than skill.

Among other themes, the play explores the subject of time and asks the audience to consider the new physics view of time happening all at the same time... it's the stuff that's better explained by Einstein or Sean Carroll of Caltech, but as someone who wants to believe there's a part of my psyche having a better time in 'the past' than in this current political miasma, I'm all for the possibility. So when Loren learns that Mayoruna people want to go back to the beginning, before the surge of capitalism and greed for oil destroyed their natural life, he and we begin to understand.

But how to do it?

Those who have been transported into unknown realms of reality through transcendental botanicals like mushrooms, and ahayuasca, understand the 'plasticity' of time, at least for the period one is on the medicine. Time moves forwards and backwards as easily as a child's swing; memories flowing through the mind like ribbons of lava, sometimes smooth, often too hot to touch for long. Some people have sightings of the future.

I've experienced that in dreamtime, seeing symbolically events that later occur in the future. Though who would believe me?

As for the tribespeople in The Encounter, there are no doubts...so along with the group, Loren ingests a drug that shows him the possibility of returning 'home.' But he is a modern man, and doesn't want to leave what he knows. That 'knowing' for him is ultimately too important.

So perhaps for this reason (admittedly, I haven't read his book), this is why he is able to return to civilization--he is not ready to let go.

This amazing tale all takes place on a simple set with one man on stage helped by auditory sensations. When McBurney as Loren, fearing for his life, acts out a 'spell' to intimidate the tribe by running circles across the stage, we see him run but are also with him in his mind and his fear. It's the most intense inner monologue.

Perhaps we, too, are telepathic and that the headphones are only a device to remind us of that potential. . Only when McBurney the actor steps back into his home and we hear the charming patter he shares with his daughter, are we somewhat less enmeshed in his brain.

Complicite is a perfect name for this company. So many talents are involved in creating this Amazonian world, (there are over 22 producers listed) and they are all complicite in helping this one man show become a complex reality. Before it begins, assistants appear at your seat to ensure that the headphones are working correctly. Even Mr. McBurney wants to make certain the left and right sides are balanced as he teaches us something about binaural microphones.

So from the very top of The Encounter, one is immersed into a larger community, drawn in through art craft, and will. And like the Mayoruna, we too can now enter Loren's mind; not with plants or herbs, but good old fashioned cutting-edge technology.