Has Jimmy Wales' marauding encyclopedic beast finally corrupted the Internet? Has Wikipedia lost all credibility, its purportedly neutral system compromised by toxic editors? Or have "skeptics" leveled the playing field?

When I read Deepak Chopra's recent cogitations on wiki wars in The Huffington Post, I considered that the patricharical figure was not necessarily the most obvious proponent of neo-horizontalism, so why was Chopra throwing down with a bunch of hostile academics on Wikipedia?

The conflict is actually a well-documented, ongoing dispute between orthodox and integrative medicine, at least that's what it looks like on the face of things. Last November, edit warring broke out when Deepak Chopra, defending biologist Rupert Sheldrake, wrote a piece called 'The Rise and Fall of Militant Skepticism,' essentially calling out Wikipedia for being dominated by activists. 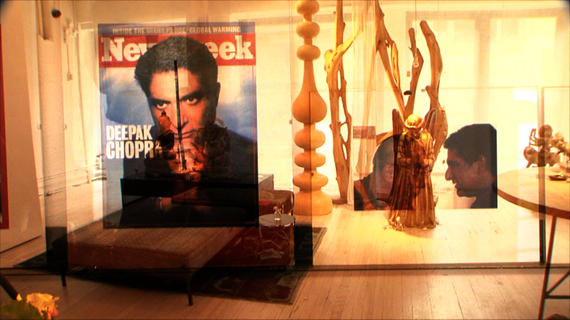 Jerry Coyne, a blogger and a professor at the University of Chicago inserted himself into the controversy in an op-ed in The New Republic. Coyne claims Chopra had been played and dismissed the accusations of 'militant skepticism', that Wikipedia was 'finally exposing' the 'psychobabble' of pseudoscience.

This was last November -- and there have been a handful of blogs, tweets, and disgruntled exchanges sent back and forth between the two ever since. Most recently Coyne published another article in response to Chopra's, "Deepak Chopra beefs again about this Wikipedia page."

A look behind the curtain at Wikipedia talk pages reveals that a highly decorated and respected Wikipedia editor, 'SlimVirgin,' recently became one of a number of admins who stepped up to defend Chopra. SV writes, "It's hard to disagree that there's a problem when you look through the [Chopra's] article and talk page."

SlimVirgin described the problem as a clear 'BLP violation' and said, "several of the accounts on the skepticism side are misrepresenting the content policies." BLP means 'Biography of a Living Person' and used an example of how Deepak's views on AIDS were intentionally misframed to discredit him.

Organizing knowledge, distinguishing facts from falsehood and other high-minded pursuits serves everyone, unless it's just a cover for divisiveness. These days Wikipedia feels like it's out of sync with founder Jimmy Wales' high ideals, and Wales is somehow invisible in the equation.

In a recent BBC interview he says, "If somebody comes in and messes up a page its really no big deal because we keep the entire history of everything. So, It's just one click for an experienced editor to revert back to a previous version. But I think it's more than that it's also the social rules, the social norms around how people choose to interact... we really have a strong loving community that really tries hard to strive for quality as best we can."