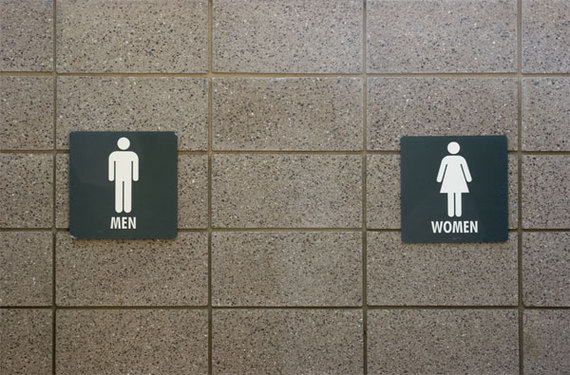 Using the bathroom as a trans person can be a very complicated task. While cis people (cis meaning non-trans) just naturally look at one of two of their options and walk into a bathroom without a second thought, for trans people, choosing a restroom is like deciding if you want to risk the chance of being harassed or physically assaulted. It's an imposition most trans people find themselves in eventually and it can make the natural task of defecating and urinating a far more challenging task than it needs to be.

I was always an androgynous kid that people didn't quite know how to place. It didn't help that in my teen years, I started developing breasts for reasons still unknown to me. When I'd try to change in the boy's locker room, before and after P.E., I'd arouse stares from confused teenage boys who didn't understand why I had breasts. Heck, I hardly understood myself. I'll never forget changing once, as I did, hunched over in a corner with my chest facing my locker. I was about to do the same old t shirt trick that I used to do where I switched my shirt as quickly as possible by grabbing a shirt as I take one off. Then out of nowhere, I felt a pair of clammy hands grope my breasts before completing the second phase of the switcheroo. These weren't the hands of a bully who wanted to joke about my "man tits," they were the hands of someone who was curious and confused because what I had were unmistakably breasts. I pushed him away from me and looked back at him only to see a blank and inquisitive stare. He wasn't doing this with the attention of his peers that would laugh at his joke. He wanted to feel my breasts for his own gratification and this confused and terrified me. That was the last time that I used the boys locker room. I'd been groped before by other students, but this was the line for me. I started changing for P.E. by leaving class early and changing in deserted restrooms and avoiding the locker room altogether. I made it my goal in school to do everything I could to get out of taking Physical Education and having to be forced to fit into a category that I clearly didn't belong to.

I didn't accept that I was a trans woman until college, but before then I identified as genderqueer, which for me meant that my gender wasn't binary. I was happier with myself and my growing understanding of my own body, but bathrooms became more complicated because unless someone knew me, seeing me in the men's room was confusing and I wasn't totally comfortable with using the women's room. So using the restroom became a complicated game where I'd try to use the restroom when I knew very few people would be using it. I felt like a spy, rushing into that horrid restroom with that broad linear stick figure, making sure that no one saw me enter and no one saw me leave. Sometimes, I'd sit in a stall, just waiting for the bathroom to clear before I felt comfortable leaving. Looking back, this was a bit silly, but it felt necessary to me at the time. I went to CalArts, and at CalArts there were two single person bathrooms behind a single door. This was ideal for me because regardless of gender, everyone walked through the same door and used relatively similar facilities. It felt like the safest bathroom for me to use and since I was an animator and my school was close to it, I'd often opt for it. This was the only bathroom I used in the entire school and this wasn't an issue most of the time. However, when I started having labs and classes in the basement, things became complicated. If I had to go, I'd have to travel from two extreme ends of the campus in order to do my business. So I had to... compromise. Without being too explicit, I started a system where I'd use alternative methods of relieving myself. These methods felt dehumanizing and to be honest -- disgusting, but even at an art school, I feared the repercussions of me using a bathroom of a gender binary that I didn't fit into. At least not yet.

As I came to understand my gender, I recognized that I was dealing with a lot of denial and internalized transphobia. I realized that I was binary trans and after that realization things became a lot easier for me and I suddenly found myself fitting in seamlessly with society. I "pass" which means that people just assume that I'm cis in my day to day. So using the women's restroom was natural for me. For almost a decade I've been using the women's restroom and I can confidently say that I've never had an issue. I travel across the country for work so I've used the ladies room in the North, South, East and West and have never once had an issue. When I hear about these bathroom debates, I frankly find them laughable because without knowing it, you've likely used the restroom with a trans person and it was completely uncontroversial.

The ease in which I use the women's room is a privilege. I have the benefit of being able to look cis and never have my gender questioned. I'll never forget accidentally walking into the men's room years ago and having a guy laugh and tell me I was in the wrong restroom. Passing is survival and the ability to pass is a privilege that not all trans people have or want. Many trans people are flaunting their ability to pass by turning to social media in order to protest bathroom legislation across the country. While I understand the point, I can't ignore the queer kid that I was that didn't feel comfortable in either restroom. These are the people that are often forgotten in this conversation and I honestly struggle to come up with a solution. What makes me feel comfortable now didn't make me feel comfortable back then. I can only speak for myself and the way in which I've relieved myself my entire adult life, and for me the bathroom is a non-issue. I'd stick out like a sore thumb in the men's room and attention is the last thing I want when I'm trying to empty my bowel.

The fear mongering around trans bathroom usage is upsetting to me as a survivor of both rape and sexual assault. Often the threat of rape is dangled in front of cis people as a real issue, but frankly I find that to be silly. This may sound harsh, but If a man wants to rape a woman in the women's room, he isn't going to put on a dress before doing so and upon capture argue that he's transgender and therefore belonged in the women's restroom. That isn't real and in that equation, the person committing the offense is not trans, but cis. We act like there is this magical line drawn between restrooms and I'd hate to shatter fantasies, but there isn't. The harsh reality is that a little white figure in a dress isn't going to stop a sexual predator from entering the restroom. They'll do it anyways. The division gives you a false sense of safety and overlooks the true nature of sexual assault, including that women can sexually assault and rape other women. Furthermore, I find it laughable that colleges and high schools are expressing concern for women on their campuses because we've seen time and time again that schools are more invested in maintaining their image than properly addressing sexual assault on campus. Married to these fear mongering tactics is this idea that trans women are predatory sexual deviants by nature, but if cis men are dressing as women to harass women in the restroom, how does that reflect poorly on trans women? Mike Huckabee fondly stated that he'd love the chance to spy on teen girls showering as a teenager and wishes he could have claimed to be trans to be able to do so now. What's being overlooked are the depraved and sick desires of some cis men to abuse these laws. They should be punished, not trans women.

Plenty of cis people will read this and say things like "I respect trans people, but they should have their own bathrooms" and I'll be honest and say that regardless of the law and regardless of unsolicited opinions, I'm going to use the women's room as I have been, because in reality, no one cares. When you're in a public restroom, how often do you think of the genitalia of the person in the stall next to you? I never have. When I'm in a public restroom, I want to do my shameful business and leave without making eye contact with anyone and pretend that it never happened. It's unsettling to hear the various sexual fantasies cis people have about what trans people do in public restrooms. The reality is that trans people are more likely to see violence and to be assaulted in restrooms than vise versa. We just want to pee and shouldn't have to make every BM and pee a political statement.

At the end of the day, we all defecate and urinate. It's natural and it helps our bodies stay healthy and clean. Unfortunately, for trans people, the natural task of relieving themselves is political and honestly, it shouldn't be. YouTube Space LA has a bathroom that is unisex with wall to wall stalls. It cuts down on building cost and allows everyone to use the restroom regardless of their gender, but if that makes you feel uncomfortable, there's a separate personal restroom. Is it weird at first? Sure, but I think it's the future. A future that will take adjusting, but one that is more inclusive and less erasing.