There have been a few days when I've leaned back against the wall and thought, "Oh... this is the hard part. This is what I was afraid of."

When they rolled my son down that white hall into heart surgery, I nearly imploded from the sheer fear of losing him, of the possibility he may never make it out of that room. So many moments since the day of his birth, his smile brightened the world; I couldn't imagine living a life without that smile.

That process, his heart surgery, was the hardest of my life. And, I'm going out on a limb here and assume his too. But he made it through to give us more smiles. In fact, there is rarely a day that goes by that we don't laugh together, Marcus and I.

Today it came from Richard Dawkins as he replied to a person saying on Twitter, "I honestly don't know what I would do if I were pregnant with a kid with Down Syndrome."

@InYourFaceNYer Abort it and try again. It would be immoral to bring it into the world if you have the choice.

Sure I know. This is just one public person's opinion giving voice to the thought that it is OK to simply eliminate a certain "type" of person.

Human with 46 chromosomes: You're OKed for life.

Human with 47 Chromosomes: Is not OK for life.

It is also possible that Richard Dawkins shares eugenic thoughts like this mostly to get a rise out of folks and will say "whatever" for publicity sake. This puts me in a conundrum: To play or not to play? Well, clearly I'm here.

Let's continue. He then went on to clarify, when asked about aborting/eliminating those with autism as well:

@InYourFaceNYer People on that spectrum have a great deal to contribute, Maybe even an enhanced ability in some respects. DS not enhanced.

It's interesting that Dawkins appreciates the diversity and potential contributions of people on the autism spectrum, likely because he can in some way relate. However, blatantly calling out an entire group of people from the human race as not being "enhanced" enough to be born? Wow Dawkins, you may want to rethink what is "immoral." I can see that in the area of human compassion, maybe Dawkins cannot relate.

My life is more enhanced with my son as a part of it than I ever thought possible. (And I'm a writer, I have a very good imagination.)

Prenatal tests for Down syndrome are growing in the pharmaceutical marketplace. However, there is no prenatal test for potential. Just ask Karen Gaffney, Rion Holcomb, David Egan, and really, I could go on forever with other names, faces, links, and lives. Oh alright, here's a few more...

I'm not telling any parent what they can or can't, should or shouldn't do. I'm telling Richard Dawkins he's wrong to make that blanket statement as well. Sadly, more wrong than I believe he has the capacity to know. But I wouldn't deny him life because of it. 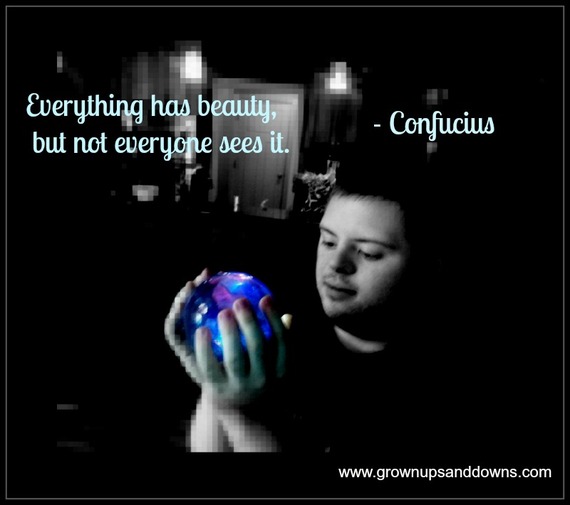