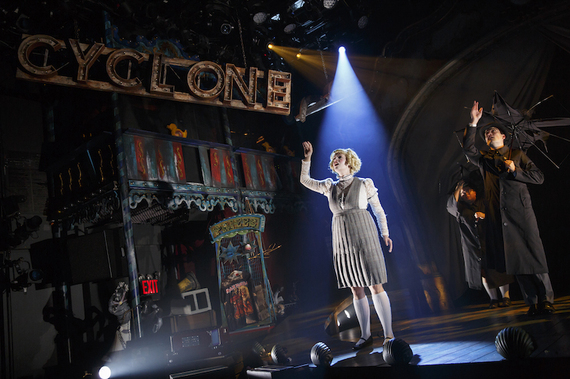 If you took the movies Defending Your Life and Final Destination (the third one, to be specific) and mixed them in a blender with Glee and then put the result on a stage, you might get Ride the Cyclone.

It's a weird little musical comedy about a horrific disaster: six members of the Saint Cassian High School Chamber Choir of Uranium City, Saskatchewan meet their tragic demise when a roller coaster goes off the rails. Yes, they're dead. But now, thanks to a mechanical fortune teller (add Big to the mix), they discover that one of them can return to life, via a unanimous vote of the group.

Each defends his life in turn, the Tracy Flick-ish Ocean O'Connell Rosenberg (her parents were uber-hippes), chubby and schlubby Constance Blackwood (her catchphrase is "I'm sorry"), Ukranian-born would-be rapper Mischa Bachinski, Marlene Dietrich wannabe Noel Gruber, fantasy lover Ricky Potts, and a spooky sixth contestant identified only as Jane Doe, because she, literally, lost her head in the fatal accident and remains unidentified.

All of the performances are terrific, revealing both the teenage cliché of their characters, as well as the genuine human being underneath. And it's charmingly pulled together by director and choreographer Rachel Rockwell, doing a fine service to the hilarious, inventive, and often surprising work of writers Brooke Maxwell and Jacob Richmond.

It's creepy, it's campy, it's touching, and, for a musical about a bunch of dead teenagers, it's very funny. Take a ride.

Cover: Emily Rohm and the cast of 'Ride the Cyclone;' photo by Joan Marcus