It has been a frustrating day on the Louisiana Delta. High winds and rough seas kept boom-laden vessels in port while the expanding river of oil unleashed from the Transocean/Deepwater Horizon oil rig explosion moved closer to environmentally-sensitive marshlands. In a move born more of desperation than expediency, the United States Defense Department authorized the deployment of the Louisiana National Guard to help local communities in the cleanup and removal of oil. Whether critical habitats can be protected from contamination is the question of the hour. 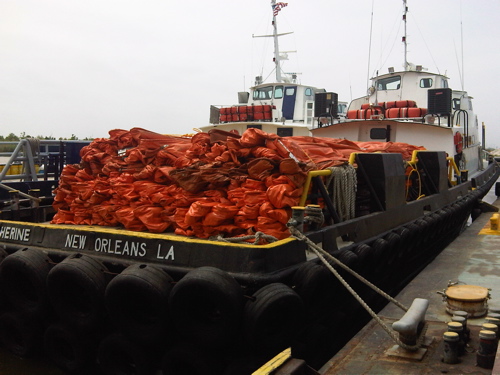 In statement issued late today, Pentagon Press Secretary Geoff Morrell said, "As the responsible party in this incident, the government will hold British Petroleum accountable for the costs of the deployment."

At the request of the President, Assistant to the President for Homeland Security John Brennan, held a "principals-level meeting today which lasted for more than an hour to discuss the oil spill in the Gulf of Mexico and ensure that the resources of the federal government are fully integrated in the response to the incident," according to a statement from the Office of the White House Press Secretary. Secretary of Homeland Security Janet Napolitano, Secretary of Interior Ken Salazar, Secretary of Defense Robert Gates, Admiral Mike Mullen, EPA Administrator Lisa Jackson, Rear Admiral Mary Landry, Deputy Secretary of Interior David Hayes, NOAA Administrator Jane Lubchenco, and Assistant to the President for Energy and Climate Carol Browner were in attendance.

Napolitano cannot be happy with the official press photo of her touring the Gulf. It is eerily reminiscent of the photo taken of George Bush when he did a fly-over of New Orleans after Hurricane Katrina in 2005. Bush was roundly criticized for government inaction in the wake of the flood. 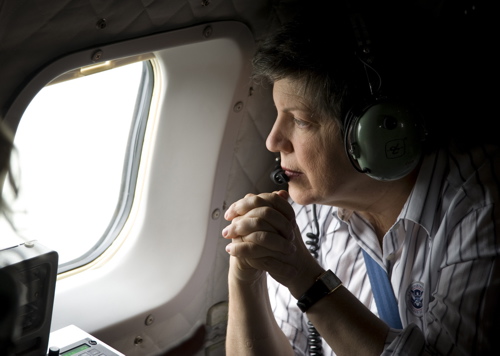 Senator Mary Landrieu (D-LA) went to Louisiana to see first-hand the damage caused by the explosion of the Transocean oil rig. Landrieu is now using the word "disaster" to describe what officials until now had been calling an "incident." At a press conference today, officials acknowledged that the flow might be much more than the current "estimate" of 5000 barrels per day. Some estimates from remote sensing experts put the number at closer to 20,000 barrels per day (850,000 gallons)--a catastrophic figure.

I have been on the ground and in the air, and have seen for myself the result of this extremely serious and unprecedented disaster in the Gulf of Mexico. Oil from the Deepwater Horizon continues to flow from the rig's well at an estimated rate of 5,000 barrels per day. Appropriately, the focus these last 11 days has been trying to get this uncontrolled flow of oil shut off. Another critical priority is trying to prevent the oil from damaging Louisiana's coast and the shorelines of Mississippi, Alabama and Florida. Right now, the sheen is close to our shoreline in Plaquemines and St. Bernard Parish. Booms are being deployed. Other methods of protecting the coastline are being suggested. There is a billion dollars at the federal level to support this effort, and unlimited resources are available from BP to do the same.

This problem is very serious and will remain serious until this well is shut off. The oil that continues to pour into the Gulf is beginning to reach the Louisiana coast and poses an enormous threat to several species of wildlife and our state's robust fishing, shrimp and oyster industries.

While booms have been deployed in past days, ships remained and teams remained on standby today as the weather worked against them. Winds at the Cypress Cove Marina in the Delta city of Venice were blowing a strong 20-25 knots from the south/southeast. Sensitive shallow-water spawning beds for game fish, shrimp and oysters are in the path of the advancing spill, presenting a huge threat to the already battered Gulf fishing industry. 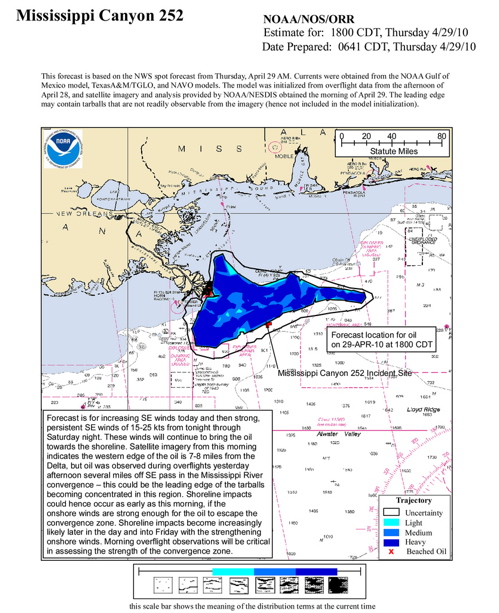 Landrieu also called for a 30-day review "to find out what went wrong and determine what new safeguards and technology must be put in place to prevent future tragedies of this magnitude."

As part of the ongoing federal response to the BP oil spill, the EPA today established a website to inform the public about the spill's impact.

For a constantly updated aggregate of news on the spill, especially as it impacts Louisiana, visit the NOLA News Ladder.