NEW ORLEANS -- In the past five years, I have written at least 500 letters to authors, reporters and journalists patiently and politely pointing out errors that are always backed up by data. My goal is to battle the myths still flying thick around the horrific flooding in New Orleans five years ago.

Some respond with gratitude, and thank me for taking to time to update them. But the great majority refuses to even acknowledge an error, despite stark evidence.

But the shocker is the occasional "it wasn't my point" defense of an error.

Strangely, in the world of journalism, I actually hear this defense: that if a mistake is not central to the point of a piece, then the mistake doesn't matter. Since when did misstatement of facts cease to matter?

"There is no such thing as a harmless mistake in journalism," responded Dr. Sandra Buchholz, noted author and specialist in American Pragmatism to my question about the "it wasn't my point" defense.

I heard the defense again this week from global-warming specialist Mark Hertsgaard defending his piece which recently appeared in The Nation on the comeback of residents in the Lower Ninth Ward neighborhood of New Orleans. His otherwise well-written piece had a misleading passage that any reasonable person would have interpreted as stating that an un-moored barge broke through a nearby levee and caused the flooding in the neighborhood. A quick fact check reveals that post disaster analyses attribute the levee failure to engineering design error.

"...I didn't mention Sandy's point because I saw no need to go into that level of detail about an issue that simply wasn't the point of my article. If my phrasing of a piece written in haste inadvertently conveyed a misleading impression, I apologize..."

"Quite a backhand apology," observed David Winkler-Schmit, a local journalist who has extensively covered the New Orleans levee failures. "Hertsgaard should have taken his medicine, corrected the error and left it at that." 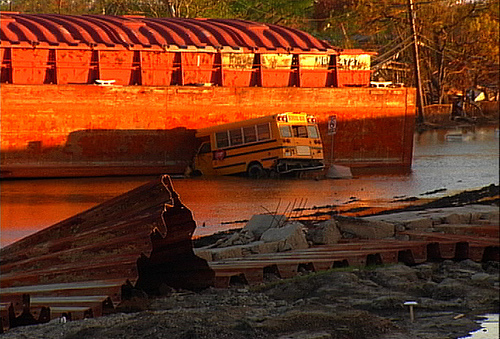 Suppose I reviewed a restaurant one block from Ground Zero of the Twin Tower Collapses in New York City and wrote, "this cozy restaurant is one block from where the Girl Scouts commandeered jets and flew them into the World Trade Center." Using the "it wasn't my point defense," I could claim the Girl Scout mistake doesn't matter because it isn't the point of my restaurant review.

Furthermore, it often seems that it's the things outside the point of an article that people are more likely to pick up and notice. So it's important that dangerously misleading details are corrected immediately before they are repeated, over and over, a process that can happen remarkably quickly.

Mr. Hertzgaard is by no means alone. Bruce Nolan, reporter for the New Orleans Times Picayune used the "it wasn't my point" defense in response to a letter from Guy Johnson, a resident of the Lakeview neighborhood of New Orleans who pointed out that the 2005 flooding should be called a "man-made engineering disaster" in a Sunday, August 2010 piece. Here is Mr. Nolan's response in its entirety.

"Mr. Johnson, what we set out to do here, and I think we did it pretty well, was describe happened to us physically and psychologically in the weeks, months and years after the levees failed under Katrina's pressure. Of course the drowning of New Orleans represents the greatest engineering failure in American history. And that failure was triggered by the stresses of Katrina even though, yes, its center missed the city. All of that is universally acknowledged, although some people stress the engineering failure and downplay quite a lot the presence of the storm. However, for the purposes of this article, I have no dog in that fight. None of that was part of my mission which, again, was to describe how we've changed since then."

Mr. Nolan's reply is interesting because he did accurately describe the flooding as due to levee failure and acknowledged that the flooding was the 'greatest engineering failure in American history,' but then says there's no need to be clear about flooding facts in his reporting because it wasn't the point (mission) of his article. 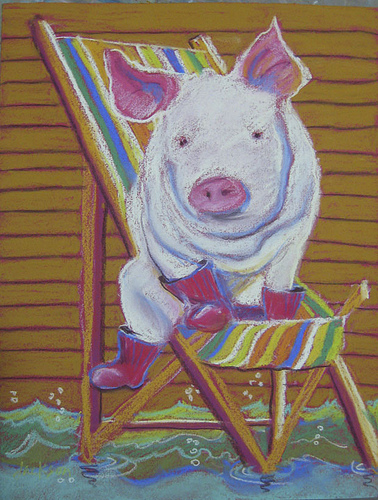 We don't want to get our wee feet wet with....messy details.
Pastel by Polly Jackson

"I am no longer surprised at any lengths people will go to in order to "demonstrate" that they are beyond criticism, says Dr. Buchholz. "This is why I decided, some years ago, that I would no longer be willing to evaluate books submitted to various publishers."

The Nation has published my letter to the editor and Mr. Hertsgaard's reply. Both can be found here.

Sandy Rosenthal is founder of Levees.org in New Orleans. The mission is education on the true facts about why New Orleans flooded. The group has nominated two breach sites to the National Register of Historic Places.