At the end of last week's suspenseful "Defiance" episode, Irisa (Stephanie Leonidas) had escaped from the office of Doc Yewll (Trenna Keating), who, it turns out, is much more than just the wise-cracking alien physician she appears to be.

Yewll now has the mysterious gold artifact formerly possessed by the wily (and now-deceased) former mayor, Nicky Riordan (Fionnula Flanagan), and the doctor had been using it during experiments on a sick Irisa, who appears to be closely linked to the object's powers.

In this exclusive clip from Monday's season finale of "Defiance" (below), Yewll is questioned about the disappearance of Irisa, whose fate figures prominently in Season 1's last episode. Also in the finale, Joshua Nolan (Grant Bowler) has to confront his past, and the residents of the town cast their votes in the heated mayoral race between Amanda Rosewater (Julie Benz) and Datak Tarr (Tony Curran).

At least we already have one bit of good news about the future of "Defiance": The show has been renewed for a second season, and HuffPost TV can exclusively reveal that the show will return -- per the picture below -- in June 2014. 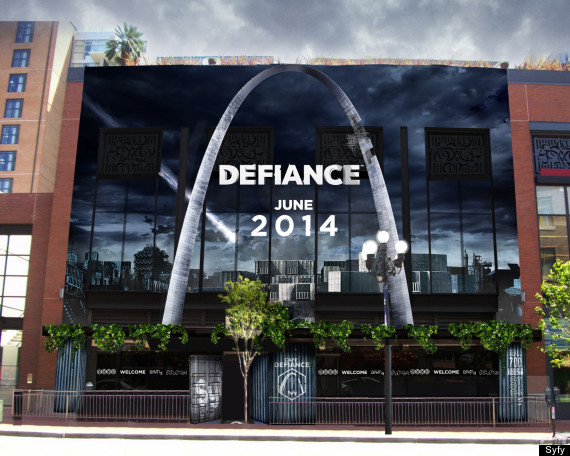 And here's one last "Defiance" tidbit to keep fans going into Season 2: The show's cast will assemble July 19 for a panel discussion at San Diego Comic-Con (a panel that will be moderated by yours truly, by the way). During Comic-Con, Syfy will turn a Hard Rock Hotel restaurant into Cafe Defiance, the exterior of which is pictured above. And by the way, if you saw last year's version of Cafe Defiance in the same location, don't worry, this year's edition will be quite different.

If you have questions for the cast, be sure to submit then in the comment area below!